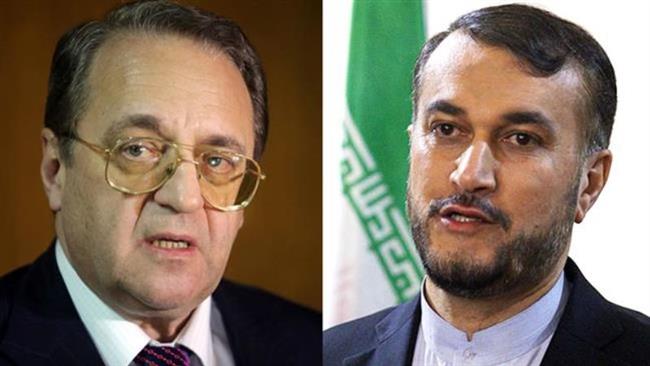 Senior Iranian and Russian diplomats have called for making efforts to establish a ceasefire in all areas in Syria except those held by terrorist groups.

In a Monday phone conversation, Iran’s Deputy Foreign Minister for Arab and African Affairs Hossein Amir-Abdollahian and Russian official Mikhail Bogdanov emphasized that the crisis in Syria should be settled only through political approaches.

They also stressed the importance of dispatching humanitarian aid to war-stricken Syrian people.

Amir-Abdollahian and Bogdanov said the resumption of peace talks between the Syrian government and opposition groups is a main priority for the Arab state.

Bogdanov, who is the Russian President Vladimir Putin’s representative for the Middle East and Africa, plans to pay a visit to Tehran at the invitation of Amir-Abdollahian to hold more consultation on the latest regional developments.

The Monday phone conversation came two days after Syrian President Bashar al-Assad said he is ready for a ceasefire on condition that it stops Turkey and other countries from sending militants and weapons into the country.

A ceasefire must guarantee that “other countries, especially Turkey, are prevented from sending more terrorists and weapons, or any kind of logistical support,” Assad said in an interview with the Spanish newspaper El Pais.

So far, attempts to negotiate a ceasefire in the war-torn country have failed. Following a marathon meeting held in the German city of Munich on February 12, world powers agreed a cessation of hostilities, which was scheduled to start after a week but never took effect.

Syria has been gripped by a foreign-backed militancy since March 2011. According to a new report by the Syrian Center for Policy Research, the conflict has claimed the lives of over 470,000 people, injured 1.9 million others, and displaced nearly half of the country’s pre-war population of about 23 million.