“Iran, Russia to Maintain Strategic Ties until Restoration of Peace to Syria” 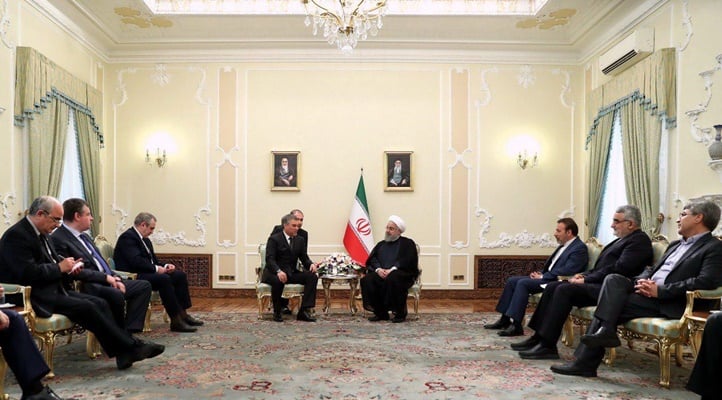 Iranian President Hassan Rouhani has called the relations between Tehran and Moscow ‘strategic’, adding the relations should continue relentlessly until security and stability is fully restored to Syria and the whole region.

In a Monday meeting with Russia’s State Duma Speaker Vyacheslav Volodin in Tehran, Rouhani underlined that the two sides’ parliaments can play a leading role in strengthening bilateral, regional and international relations between Iran and Russia.

“Our bilateral, regional and international relations have been unique over the past decades and today we are witnessing friendly and enhanced ties between Iran and Russia,” he was quoted as saying in a Farsi report by the President’s official website.

He said during his last 12 meetings with his Russian counterpart Vladimir Putin over the past years, “we have taken a step further during each meeting towards strengthening our relations in all fields.”

He called for taking advantages of all the available capacities for expansion of ties between Tehran and Moscow and said there are a number of untapped areas in which the two sides can promote their ties.

“Areas like peaceful energies, oil and gas and other economic fields including banking and trade relations are filled with good capacities which Iran and Russia can take advantage of to meet further their national interests,” he noted.

He called the multilateral relations between Iran and Russia and other regional states ‘highly valuable’ and said the two sides’ relations have been very constructive when it comes to Syria and regional peace and security.

President Rouhani underlined that Iran and Russia have similar stances towards international issues and added, doubtlessly certain Western countries are seeking to put Russia in trouble under ‘false pretexts.’

“Iran is facing similar troubles in the region,” he added, saying to tackle the troubles, the two sides need to establish closer cooperation in international issues.

Rouhani said Iran-Russia bilateral, regional and international cooperation will end up finally in the interests of the two nations and expressed the strong will of his government to establish all-out relations with Russia.

He said Iran’s parliament supports the strengthening of relations and added the two sides’ parliaments can play a leading role in expansion of ties.

For his part, Volodin said the growing ties between Iran and Russia are due to the good decisions made by the two sides’ presidents and added Russia’s parliament throws its weight behind any legal efforts and measures that pave the way for further expansion of ties.

He pointed out that Iran and Russia face common regional and international challenges, saying the two sides are determined more than ever to tackle the challenges through establishing closer cooperation and developing a common roadmap.