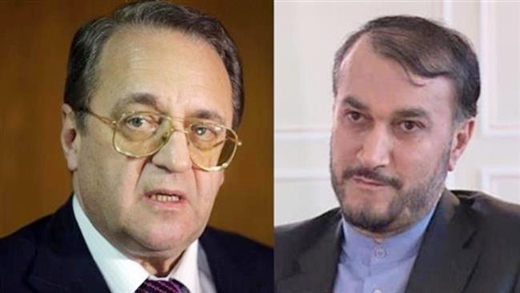 Iran and Russia have reiterated the necessity of finding a political solution to ongoing crisis in Syria.

Deputy Foreign Minister for Arab and African Affairs Hossein Amir Abdollahian and his Russian counterpart Mikhail Bogdanov discussed the latest developments in Syria in a meeting in Moscow Tuesday.

The two officials underscored the need for the convergence of the countries’ stances about regional policies in the run-up to upcoming international talks on Syria in Vienna.

US State Department Spokesman John Kirby said Monday a new round of international talks aimed at resolving the crisis in Syria will be held in Vienna Saturday.

The event will be a continuation of October 30 negotiations in Vienna, which were attended by 17 nations, including Iran, as well as envoys from the United Nations and the European Union.

At the end of the talks, the participants agreed on respecting Syria’s national unity and sovereignty as well as eradicating the terrorist groups operating in the Arab country.

However, they remained at loggerheads over the role President Bashar al-Assad would play in Syria’s political process. While some countries, such as the US and its regional allies, want the removal of the Syrian leader as part of a solution to the issue, others, including Iran and Russia, say only the Syrian nation can have a say on that matter.

Amir-Abdollahian and Bogdanov also stressed intra-Syrian negotiations under international supervision for the settlement of the Syrian crisis.

The two diplomats further emphasized the continuation of consultations between Tehran and Moscow for the restoration of peace and stability in the Middle East, particularly in Syria.

The foreign-backed militancy in Syria, which flared in March 2011, has so far claimed the lives of over 250,000 people and displaced millions.