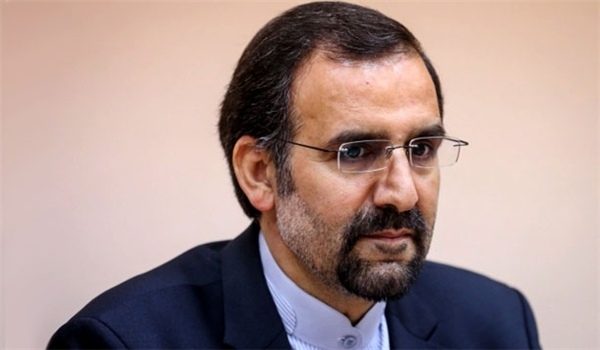 The opening of a joint Iran-Russia bank account, presence of Russian banks in Iran and choosing a Russian bank for rial-based trade exchanges in Russia are some of the measures underway.

Tehran and Moscow have started implementing a recently signed banking memorandum of understanding (MoU) which calls for the establishment of a joint bank to ease bilateral trade through national currencies, Iran’s Ambassador to Moscow Mehdi Sanayee announced on Monday.

“Three measures are underway (within the framework of this agreement), including opening of a joint bank account by Iran and Russia, presence of several Russian banks in Iran and choosing a Russian bank for rial-based trade exchanges in Russia,” Sanayee said, addressing a meeting of Iran-Russia Joint Chamber of Commerce in Moscow in Monday.

He noted that the representatives of two Russian banks came to Iran and held talks with officials of the Central Bank of Iran last week, and said, “The second step to broaden banking relations between Iran and Russia will be opening a joint account.”

“Russia’s Mir Business Bank is ready to render financial services to Iranian traders according to a recent agreement signed by Iran and Russia,” Sanayee said in Moscow at the time.

He noted that financial transactions by Mir Business Bank take place within the framework of the Russian Central Bank, and said, “Legal and real entities can now exchange indefinite amount of foreign currencies with Iran’s rial.”

The Iranian ambassador said that the move has taken place to encourage Iranian exporters and pave the way for the transfer of the cash earned from exports of Iranian goods to Russia and Central Asia and the Caucasus.

Also in March, Sanayee announced that Iran and Russia had signed a memorandum of understanding (MoU) on the supervision of their central banks over the financial operations of the two countries’ banks.

“The MoU was signed by the deputy governors of the Iranian and Russian central banks during a visit to Moscow by a high-ranking Iranian banking and financial delegation from March 10 to 12,” Sanayee said.

He noted that Iran’s banking delegation also visited Russia’s central bank and other major banks during its stay in Moscow.