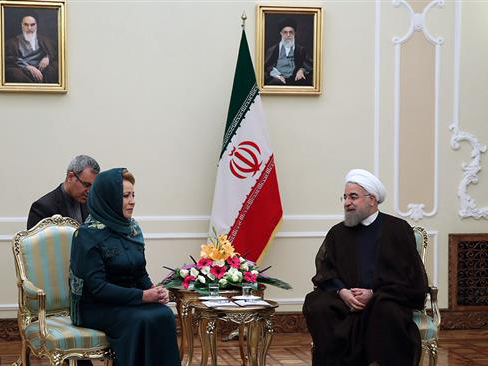 Iranian President Hassan Rouhani says the Islamic Republic and Russia will proceed with their “strategic cooperation” in the campaign against terrorism until the elimination of this malicious phenomenon across the Middle East.

“There is strategic cooperation between Iran and Russia to fight terrorism and such cooperation will continue until the eradication of terrorism in the region,” Rouhani said in a meeting with Russia’s Federation Council Chairperson Valentina Ivanovna Matvienko in Tehran on Monday.

Elsewhere in his remarks, the Iranian president said Russia is an important friend and neighbor of the Islamic Republic and added that the two countries have common interests in the region and the world.

“The Islamic Republic of Iran’s resolve is to expand relations with the Russian Federation in all fields,” Rouhani stated.

He urged Tehran and Moscow to make use of the opportunities created after the implementation of last year’s nuclear agreement, known as the Joint Comprehensive Plan of Action (JCPOA), signed by Iran and the P5+1 group of countries to improve ties in economic, cultural, scientific and technological fields.

He said developing banking and economic cooperation, facilitation of customs-related issues and visa issuance process can speed up trade ties between the two countries.

The chairperson of Russia’s Federation Council, for her part, said Tehran and Moscow have a common stance on the fight against terrorism.

She added that Russia calls for the expansion of all-out cooperation with Iran and noted that the JCPOA opened new horizons for cooperation between Tehran and Moscow, particularly in energy and nuclear fields.

Heading a high-ranking political and economic delegation, Matvienko arrived in Tehran on Sunday for an official two-day visit. She attended a joint press conference and held a meeting with Iranian Parliament Speaker Ali Larijani on Sunday and also sat down with Foreign Minister Mohammad Javad Zarif on Monday.