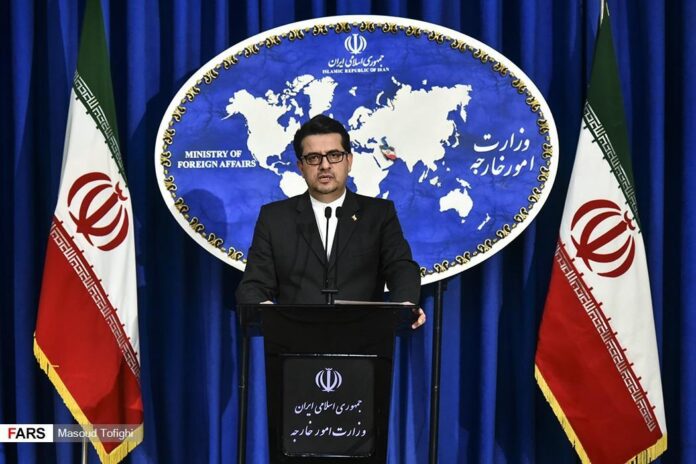 The Iranian Foreign Ministry spokesperson has rejected a recent report from the US Department of State on Iran, saying Washington lacks the political and legal competence to make a judgment about the other countries given its dark record of crimes, from terrorist activities to warmongering policies.

In a statement on Monday, Spokesperson for the Ministry of Foreign Affairs of the Islamic Republic of Iran Seyyed Abbas Mousavi categorically rejected a recent baseless report released by the US Department of State, and denounced the anti-Iran allegations as a result of fabrication, conspiracy and illusion that have been made with the purpose of creating a psychological war and exerting pressure on Iran.

“The so-called report, as a matter of course, is an amalgam of fantasy and bogus accusations as no document has been ever provided to prove them, and is being levelled by the ones who have interfered in at least 55 independent countries in the world under spurious pretexts over the past recent century. There is a long list of their (American) illegal measures against people of the world, while the analysts and researchers have revealed only a bit of them by publishing hundreds of books in this regard,” Mousavi added.

“Only in the section of sanctions and economic terrorism and according to the statistics from the US Department of the Treasury, 33 countries have been sanctioned only since 2017 until now. Many of these unilateral and extraterritorial sanctions have had heavy and destructive impacts on the people of those countries,” the spokesman noted.

Throughout its short history of existence, the United States’ militarism has been much harsher than many other bloodthirsty and aggressive empires in the history, Mousavi said, adding, “Such militarism has been so unprecedented that this country (the US) has had 135 big wars in its history, and during 243 years of its existence, only 16 years have been free of wars, massacre, bloodshed, and employment of every conventional and unconventional weapon.”

He further pointed to the US government’s direct and indirect interference in the coups, regime changes and colour revolutions after end of the Second World War, adding, “The US has directly mounted 79 coups and regime change plots in the world countries through the Central Intelligence Agency (CIA), a number of which have failed. Moreover, the US has provided direct and indirect support for anti-government chaos and anarchy in various countries, some of which have helped puppet individuals and governments rise to power.”

The Iranian spokesperson also cited the US’ support for the fascist and drug-trafficking regimes over the past decades, saying more than 35 regimes based upon fascism and drug trafficking have received American support.

“The scandal of US spying on the world leaders, mainly the US allies, is another part of the dark and terrible record of this rebel government,” Mousavi deplored.

The Iranian Foreign Ministry spokesman further slammed the US government as a sponsor of terrorism, and above all, a terrorist state, which, according to the information available, has sponsored at least eight notorious terrorist groups with dreadful and bloody records in the West Asia, Europe and Latin America since 1960s.

Mousavi then pointed to the US’ all-out support for the terrorist Mujahedin-e-Khalq Organization (MKO), which has assassinated 17,000 Iranian citizens and officials over the past four decades. He also cited the creation of and support for the savage and bloodthirsty ISIS terrorist group as another example of the historic American crimes in recent years.

The spokesperson further pointed to the civilian casualties in the American military drone operations in at least five countries, including Afghanistan, Pakistan, Somalia, Libya and Yemen, saying a large number of civilian targets and individuals have been intentionally attacked in those operations that have been launched in the name of war against terrorism.

“The list of American terrorist and anti-human crimes is very long and appalling; but the US statesmen had better recall which laws have been formally ratified by the Congress even inside the US to whitewash the catastrophes in the eyes of public opinion in the wake of terrorist activities, targeted killings, political assassinations, and extrajudicial executions. They just need to search for those phrases to find out what country employs the ‘most creative techniques for killing innocent people’,” he added.

“Regarding what has been mentioned above, the US has by no means the political, legal and moral competence to make a judgment about the other countries, and has better deal with its own nasty and dark record first, specifically considering that the US Department of State’s management at present is proudly citing lies as a factor in its progress,” Mousavi concluded.