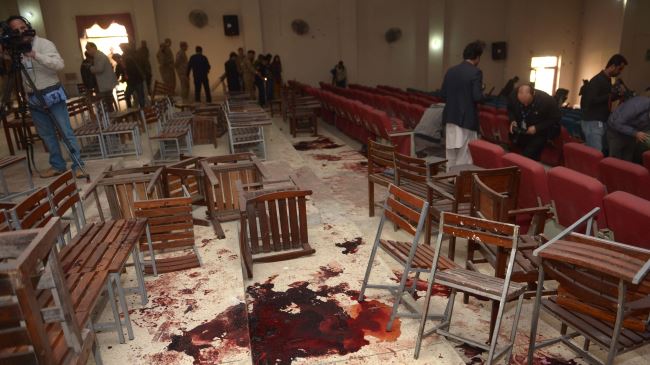 Iran’s Foreign Minister Mohammad Javad Zarif has denounced the recent terrorist attack on a school in Pakistan, saying that the perpetrators of such crimes seek to harm Islam’s image.

Zarif made the remarks in a Wednesday telephone conversation with Sartaj Aziz, a senior adviser to Pakistani Prime Minister Nawaz Sharif on national security and foreign affairs.

The top Iranian diplomat expressed sympathy with the Pakistani government, people and the families of the victims over the tragic incident in Peshawar, in which more than 140 people, mostly children, were killed.

In accordance with its strategic policy to condemn any kind of terrorist act, and considering its friendly and brotherly relations with Pakistan, the Islamic Republic strongly denounces the attack, Zarif said.

The Iranian foreign minister further expressed Iran’s preparedness to take any necessary measures to provide the injured with medical treatment and care.

Zarif further reiterated the Islamic Republic’s readiness for cooperation with Pakistan and other regional countries in fighting terrorism and extremism in the region.

The Pakistani official, for his part, expressed gratitude for Iran’s sympathy over the deadly incident.

He also said that bilateral and regional cooperation is the most effective way in countering terrorist and extremist groups.

In one of the bloodiest attacks in Pakistan’s history, a group of gunmen, reportedly dressed in military uniforms, stormed the Army Public School in Peshawar on Tuesday morning, going from classroom to classroom, shooting students and teachers.

The Pakistani military said at least 141 people, 132 of them children, lost their lives in the attack. More than 100 others were injured.

The death toll, however, does not include the seven terrorists who attacked the school, all of whom were killed by security forces.

The militant group Tehreek-e-Taliban Pakistan (TTP) has claimed responsibility for the attack, saying it was carried out in retaliation for an ongoing Pakistani military offensive against the militants.