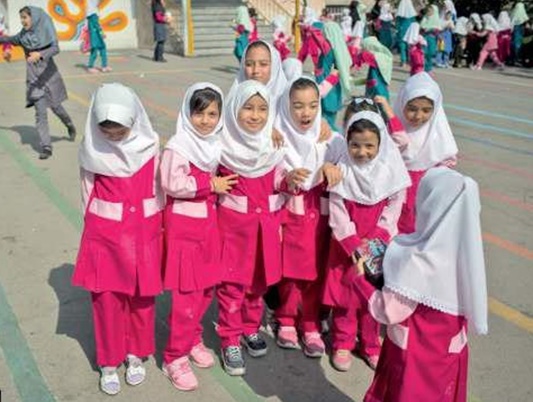 Iran has provided education for Afghan refugee children, even illegal immigrants who have no residence permits.

Iran has, for years, been hosting over 3 million Afghan immigrants despite the West’s sanctions, and tries to improve the living conditions of these war-stricken refugees.

The E’temad daily newspaper has, in a Farsi report published a few days ago, reviewed the situation of Afghan refugee children’s education in Iran. The report presents the outcome of the measures adopted following an order by Leader of the Islamic Revolution Ayatollah Seyyed Ali Khamenei to provide education for all Afghan children in Iran, even illegal immigrants. The following is a summary of the report.

The morning shift is over. Iranian girls are leaving school from the main gate. At the same time, Afghan girls enter the schoolyard from another door. These are afternoon-shift students. They go to a state-run girls’ school in Kan neighbourhood, Tehran.

This year, too, the school is hosting Afghan kids. The school used to admit only those with residence permits. But it is the third year now that children without passports and residence permits also have the opportunity to sit in class.

The increase in the number of Afghan students was so much that now, almost all Afghan children have been separated from Iranian students and the afternoon shift entirely belongs to them.

Opposite the school, there is another school. It is a high school hosting Afghan students. In that school, Iranian and Afghan students sit next to each other in class. Two mothers are waiting for the children at the gate. They say Afghan children are clever students. They say they have no problem to see Afghan children sit next to their kids. One of the mothers is a member of the school’s Parents and Guardians’ Association, and another daughter of hers is a student in the school on the other side of the street.

“My kids have Afghan friends. They happen to be more polite than my kids. They are much better than Iranian kids in terms of scores and discipline. They go to school with difficulty and study hard,” says the mother.

The report also mentioned some of the problems that Iranians have due to the presence of Afghan refugees.

“This year, the afternoon-shift classes became full and we had to send seven of the Afghan kids to the morning shift,” says a vice-principal of the school. However, she says, the Iranian students got upset and said Afghan students were not supposed to attend morning classes.

Since the Leader issued an order obliging public schools to admit Afghan students, regardless of whether or not they have residence permits, the school has become very busy.

“I want to teach Afghans how to read and write [when I grow up], so that many of Taliban and ISIS members will come to realize they shouldn’t cause destruction in cities,” says one of the students during the break.

Part of Afghanistan’s future is taking shape amid wishes and plans of the girls attending afternoon-shift classes in this school.