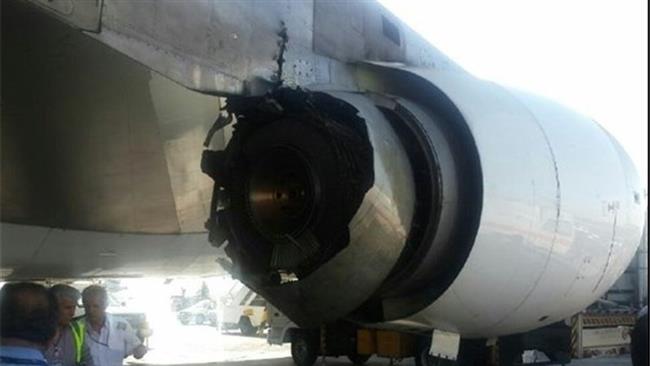 The mid-air horror ended after the aircraft with 426 passengers and crew on board safely landed at Tehran’s Mehrabad Airport .

Iranian experts are investigating to find out why a section of a Boeing 747’s engine broke off during flight on Thursday.

The mid-air horror ended after the aircraft with 426 passengers and crew on board safely landed at Tehran’s Mehrabad Airport.

A committee has been formed to examine the cause of the incident which happened during the jumbo jet’s flight from Tehran to Bandar Abbas.

“The committee will carefully examine the cause of the technical failure,” head of the engineering and safety office of the Civil Aviation Organization (CAO) Mohammad Shahbazi said.

“Prior to departure, all necessary checks had been conducted on the plane but during the flight, engine number 3 of the plane developed technical malfunction and a piece of the engine came off,” he said.

“Thanks to the pilot’s prudence, the plane fortunately returned to Mehrabad Airport with no injuries to passengers,” Shahbazi said.

The passengers were flown to Bandar Abbas on two back-up flights, he added.

Deputy head of Mahan Air Faramarz Sarvi said the aircraft was among the private airline’s modern airliners in service since about 1990.

An Iran-140 with 48 people on board crashed near Mehrabad Airport in August 2014, killing at least 39 people.

Iranian airlines have been plagued by a series of crashes because of Western sanctions which block the country from buying parts and renovating its ageing fleet.

The July conclusion of nuclear talks and an imminent lifting of the sanctions has raised hopes of a buying spree by Iranian airlines.

Boeing has said it was seeing a good opportunity for business in Iran, citing its “long history” in the country.

Iranian officials have said the country would need between 400-500 new aircraft worth at least $20 billion to renovate its aging fleet and that initial negotiations have begun with the likes of Boeing and Airbus.