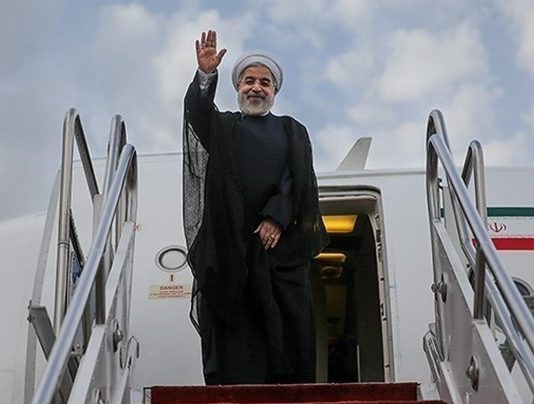 Qassemi on Saturday noted that Rouhani’s trips to Switzerland and Austria, which will begin on Monday as the president’s first visits to Europe since Washington’s withdrawal from the Iran nuclear deal, are important due to several reasons.

“This trip at this juncture can have a positive impact on Iran’s relations with the two countries and with the European Union,” said Qassemi in an interview with the Iranian Students’ News Agency (ISNA).

He said Europe should make it clear that it is willing to safeguard Iran’s interests under the nuclear deal.

“Given the Trump administration’s continued anti-Iran strategy and the US withdrawal from this international agreement (JCPOA), now we are in a situation where other signatories to the JCPOA and the EU should, in practice, prove that they are living up to their commitments and seeking to ensure Iran’s interests under this international deal,” he added.

The spokesman said President Rouhani, heading a high-ranking political-economic delegation, will travel to Bern and Vienna on Monday and Tuesday at the invitation of his Swiss and Austrian counterparts.

“This is a pre-planned visit, and important agenda items are to be discussed during the talks,” he said.

Qassemi underlined that Iran has age-old and wide-ranging relations with European countries, including Switzerland and Austria.

“In the current year, Iran and Austria are on the brink of the 160th anniversary of the commencement of their diplomatic relations. Moreover, the history of Iran-Switzerland ties goes back dozens of years,” said Qassemi.

The Foreign Ministry spokesman further touched upon Iran’s cooperation with Switzerland and Austria in economic and industrial domains.

“At the moment, Austria has a special status among European countries. We see that many international and UN-affiliated institutions, including the International Atomic Energy Agency (IAEA), are located in this country, and Austria can be described as one of the international historical-diplomatic capitals,” Qassemi noted.

He also referred to the several rounds of nuclear talks held between Iran and the P5+1 countries in Austria.

“All officials of this country from different parties and political groups have had a positive view towards these talks and the 2015 agreement both during and after the negotiations, and have seriously criticised the United States’ unilateral policies against this international agreement,” he said.

The spokesman touched upon the Swiss government’s political look at global issues, saying, “Switzerland is an independent country and has always, even during the sanctions and given the kind of viewpoint it has, tried to maintain its relations with Iran. On the other hand, we are seeing that the United Nations’ second important headquarters is located in this country as well,” he said.

“At this juncture when we are seeing the US’ pullout from the JCPOA and intense talks being held between Iran and Europe to discuss ways of preserving this international agreement given the international community and the EU’s desire to maintain the JCPOA, this trip will be extremely important in clarifying how the current path of cooperation should continue,” he said.

Qassemi noted that Iran has continued its policy of interaction with other countries and has always sought to enhance its relations with other states at the highest levels and in a balanced, fruitful and constructive atmosphere.

“During this trip, the authorities of the Islamic Republic of Iran and the two European countries of Austria and Switzerland will review the current trend of their relations while discussing ways of boosting reciprocal ties as well as regional and global developments. This visit can, at this juncture, have positive outcomes for Iran, Austria, Switzerland and other European countries,” he noted.

He also commented on reports that the president’s trip was supposed to have taken place earlier, but was delayed.

“Making arrangements for such trips at such a level can generally be coupled with several technical and protocol issues because arranging such trips entails taking all preparations and requirements into consideration by both countries,” he said.

“Talks and discussions had already taken place between the authorities of both countries on the possibility of this trip taking place earlier, but at the end of the day the necessary technical conditions were not met, and the visit was postponed to another time. Now, given the consultations held between Iran and the two countries, the date of the trip has been finalised,” he said.

Elsewhere in his remarks, Qassemi stressed the importance of President Rouhani’s forthcoming trips to Austria and Switzerland.

“This is the president’s first trip to Europe to discuss the US withdrawal from the JCPOA. Of course, different contacts have been made at different levels between Iranian and EU officials during this time, but this trip at such level is of special importance and can put forward a more precise picture and solutions regarding cooperation between Iran and the European countries,” he said.

He said Iran’s relations with Austria and Switzerland have been calm and non-controversial.

“High-level political and economic consultations with these two countries’ officials at this juncture (the US withdrawal from the JCPOA) and White House authorities’ continued anti-Iran strategy can shed more light on Iran’s compliance with international regulations and its own obligations,” the spokesman noted.

“Switzerland and Austria have always highlighted Iran’s constructive and stabilizing role in the region as well as the Islamic Republic of Iran’s efforts to fight terrorism,” he said.

Qassemi also said some anti-Iran circles, including the Israeli regime and probably the US’ ruling elite, wouldn’t like to see such trips and interactions take place between Iran and European countries.

“Within the same framework, we saw that envoys from the US Treasury representing the US government travelled to Austria in recent days and, by putting pressure on the government of that country, tried to create hurdles on the way of Iran-Austria cooperation,” he noted.

He said the trip features meetings and consultations between senior officials and probably the signature of documents between Iran and the two European countries.

“As I said, a delegation of top political and economic officials is accompanying Mr Rouhani during this trip,” Qassemi said.

The spokesman further touched upon Iran’s foreign policy on the international stage and the country’s efforts to help establish peace and stability in the region and across the world.

“To that end, and in order to establish better understanding between nations, Iran has always sought to use the lever of diplomacy in the best way possible,” he said.