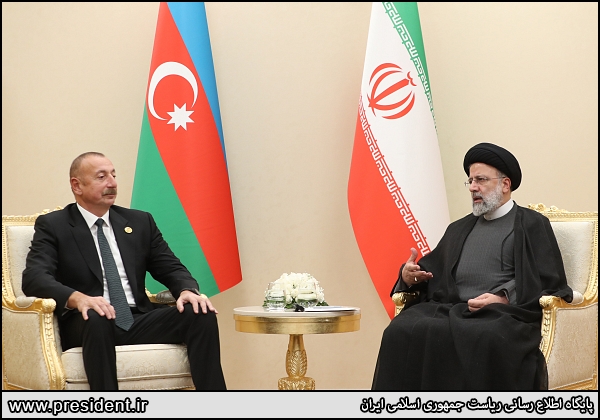 Iran’s president says the country will not allow foreign entities to interfere and create insecurity in the region.

Ebrahim Raisi told his opposite number Ilham Aliyev from the Azerbaijan Republic that people of both countries enjoy deep-rooted civilizational, cultural and religious bonds.

“The two countries have age-old and deeply entrenched ties, and we will never allow these relations to be affected by enemies,” said Raisi in the meeting held on the margins of a summit of the Economic Cooperation Organization (ECO) in Turkmenistan’s capital, Asghabat.

Raisi recalled Iran’s support for the Azerbaijan Republic’s independence and territorial integrity, saying, “Experience shows whenever regional countries settled their issues through understanding and dialog, the path to creating sedition and foreign meddling was blocked,” the Iranian president said.

He voiced concern over insecurity and foreign presence in the region, saying, “the ISIS and Zionist terrorism are two sources of threat in the region and should be tackled,” Raisi noted.

He then touched upon the United States and Israeli regime’s objective of disrupting the relationship between Iran and the Azerbaijan Republic, saying, “Foreign interference is to the detriment of the regional countries, and we should remain vigilant against their plots,” President Raisi said.

He also welcomed his Azeri counterpart’s request to boost economic ties between the two countries and extending transportation routes with the cooperation of Iranian companies.

Aliyev, for his part, said an ad hoc working group comprised of senior government officials will be set up to follow up on the implementation of the agreements reached between the two countries.

He said Baku attaches great importance to its relations with Tehran and will not allow those ties to be harmed.