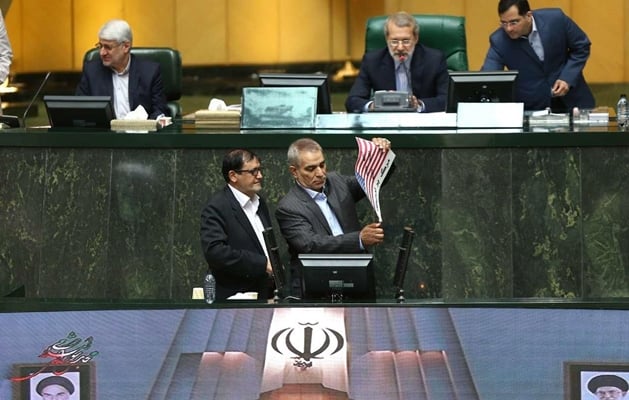 The spokesman of the Iranian Parliament’s conservative faction has renounced the recent burning of the US flag and a copy of the Iran nuclear deal by a group of hardliners, saying his faction was not behind the move.

“The last week’s move of members of the faction to burn the US flag and JCPOA was not coordinated and the faction was not aware of it,” said Hossein Naqavi Hosseini in an interview with ILNA on Wednesday.

Last Wednesday, over 20 lawmakers, most of whom members of the conservative faction, burned a copy of the 2015 nuclear deal and the US flag on the Parliament’s floor in a symbolic response to the US withdrawal from the multi-party accord.

US President Donald Trump pulled the US out of the pact on May 8, after months of threats to dismantle the accord that removed international sanctions on Iran in exchange for confidence-building curbs on Iran’s nuclear program.

The move, which raised eyebrows among Iranians, went viral on social media and was widely covered by international media outlets.

Shortly afterwards, some lawmakers made comments criticizing the move.

Alireza Rahimi, a member of the Parliament’s National Security and Foreign Policy Commission, also told IRNA on Sunday the burning of national flags and international documents in parliament would prove detrimental to the government’s policy of engaging in constructive interaction with the world.

The reformist faction issued a statement decrying the move, and its spokesman Omid Parsaei said Sunday they have set up a committee to decide how to react to the move.