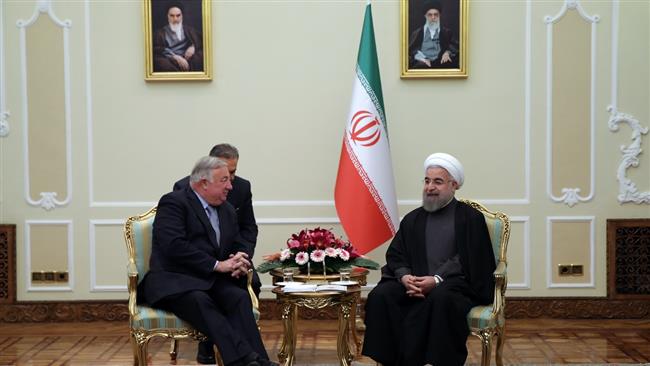 Tehran and Paris have common goals in many areas and both sides have the political will to use the existing opportunities to the two nations’ benefit, President Rouhani told the president of the French Senate.

Iran says its July nuclear agreement with P5+1, which included France, has served as a beginning for improvement of Tehran-Paris relations.

President Hassan Rouhani made the remark in a meeting with President of the French Senate Gerard Larcher in Tehran on Sunday.

Rouhani said, “Visits by high-level French economic and political officials and delegations to Iran following the nuclear agreement showed that the conclusion of the accord is a starting point for the activation and development of cooperation and relations between the two countries.”

“Tehran and Paris have common goals in many areas and both sides have the political will to use the existing opportunities to the two nations’ benefit,” he added.

He expressed hope that “Iran, as a stable country in the region, and France, as a powerful country in Europe, can join in good cooperation and measures toward resolving regional and international issues and conflicts.”

The Iranian chief executive also condoled with the French government and nation on the November 13 terrorist attacks in Paris which killed some 130 people. “Iran hopes that the perpetrators of these crimes face justice as soon as possible.”

The French official expressed gratitude for the condolence and said, “The French government and parliament attach great importance to the [upcoming] trip by the Iranian president to Paris and we hope that the visit takes place in the near future.”

French President Francois Hollande has said President Rouhani will pay an official visit to France at the end of January.