Iran not to allow access to secrets under any treaty: President 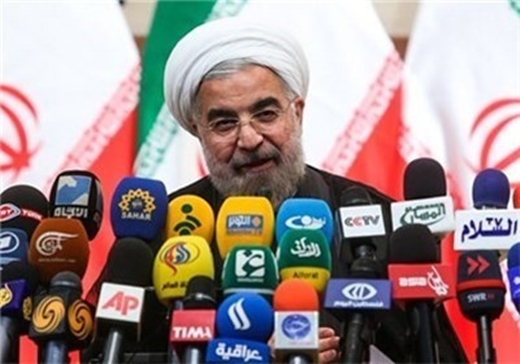 He said foreigners will be denied access not only to Iran's military secrets but also to secret information in other technological fields.

Iranian President Hassan Rouhani underscored on Saturday that the country will never allow its secrets to be exposed under the Additional Protocol of the Nuclear Non-Proliferation Treaty (NPT) or any other treaty.

“Certainly, Iran will not allow its secrets to be obtained by others under the pretext of implementing the (Additional) Protocol or any other treaty,” President Rouhani said at a press conference in Tehran.

He said that foreigners will be denied access not only to Iran’s military secrets but also to secret information in other technological fields.

What matters to Iran, the president added, is that the implementation of the Additional Protocol would prove the baselessness of allegations that Iran might be after making a nuclear weapon.

Since Iran signed the NPT’s Safeguards Agreement, the International Atomic Energy Agency (IAEA) has always confirmed that there has been no diversion in Iran’s nuclear energy program towards non-peaceful purposes, he underscored.

The president made it clear that the Additional Protocol is not an exclusive treaty on Iran, but that 124 other countries across the globe are implementing it.

“Anything implemented in those 124 countries will be carried out in Iran as well,” he stated, noting that such international commitments are always reciprocal.

“The (Additional) Protocol does not include anything dubbed inspection,” President Rouhani further stressed, referring to speculations about inspections of Iran’s military sites under the protocol.

President Rouhani touched on the nuclear talks between Iran and P5+1 (Russia, China, the US, Britain, France and Germany) with the aim of striking a final agreement and said the parties are discussing the time it will take the two sides to implement all commitments after a possible deal takes effect, adding that it will take a few months.

“When we reach an agreement, at any time and on any day, there will be an interval until the implementation of the deal (begins), which will be a few months and is among the issues being discussed.”

Iran and the P5+1 have held several rounds of talks in recent months to hammer out a lasting accord that would end a decade-long impasse over Tehran’s civilian nuclear program.

On April 2, Iran and the sextet reached a framework nuclear agreement in Lausanne, Switzerland, with both sides committed to push for a final deal, known as the Joint Comprehensive Plan of Action (JCPOA), until the end of June.