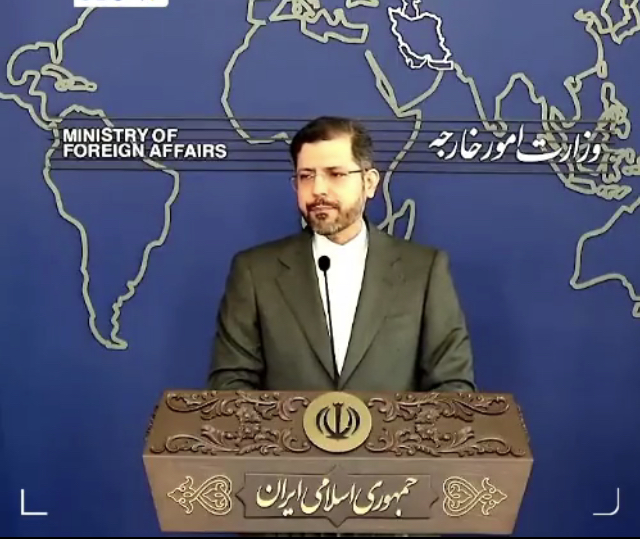 Iranian Foreign Ministry Spokesman Saeed Khatibzadeh said Iran has not had any direct dialog with the US over these past months when the Vienna talks were underway. Khatibzadeh was referring to the US National Security Advisor’s claim that he gave Iran a direct message about Tehran’s nuclear program.

Khatibzadeh, speaking at his weekly presser on Monday, added some messages about the topics of the negotiations (and no more than that) were received from the EU’s Deputy Foreign Policy Chief Enrique Mora in writing and orally from the beginning of the talks and the responses were given at the same time.

Regarding reports about the Iranian ambassador to Yemen leaving the country, Khatibzadeh said Mr. Irlou needed immediate medical care and this issue was for several days on Iran’s agenda, adding that several countries in the region including Iraq helped Iran.

He said the ties between Iran and Yemen National Salvation Government are stronger and closer than ever before, adding that Iran remains committed to give both political and economic assistance to it.

Khatibzadeh noted that the only way of helping with the Yemen issue is to heed the demands and will of the Yemeni people.

Khatibzadeh also rejected US claim that Iran has harbored al-Qaeda leaders, saying such baseless allegations are made by Washington every now and then.

On Iran’s agreement with the International Atomic Energy Agency over the installation of cameras at the Karaj site near Tehran, Khatibzadeh said there will be no problems in the Iran-IAEA ties as long as issues remain within the technical confines.

Elsewhere, Khatibzadeh touched on a claim that Iran is enriching uranium to 90 percent purity.

He said Tehran, as a member of the IAEA, has always lived up to the Nuclear Non-proliferation Treaty and the agency is fully aware of Iran’s activities. He added that the level of enrichment will be decided by Iran’s needs.

Also on the Vienna talks, Khatibzadeh noted the US has not presented any tangible text to the P4+1 while Iran has put forth two documents that embody previous texts. He added that if the other sides come to the negotiating table with tangible proposals, an agreement will be reached in the shortest possible time.

Khatibzadeh also spoke of Iran’s relations with Saudi Arabia. He said Tehran is awaiting a response from Riyadh and progress in talks with the Saudis is contingent upon the other side’s seriousness.

Khatibzadeh added that Iran invites Saudi Arabia to resort to diplomacy and non-interference in the internal affairs of other nations.
On Britain’s debt to Iran, the Foreign Ministry spokesman said London has not yet taken any practical measure in this regard and made paying the debt conditional on other issues.