Iranian newspaper headlines across the country on September 8

The visit Hajj Organization officials paid to the Supreme Leader appeared on the front pages of almost all Iranian newspapers on Monday. “Muslims should stick to unity to foil enemy plots to divide them.” was the headline most Iranian dailies used to cover the leader’s remarks. The president’s comments on culture and local politics also grabbed headlines.

Ebtekar: “Erecting walls and introducing Internet filtering won’t work,” the president says at a meeting with the elite in Mashhad on the second day of a visit to Khorasan Razavi Province. “In this day and age we should be convincing in dealing with the younger generation. Building walls [to separate the sexes] and introducing filtering [aimed at content control] won’t solve our problems.” That headline is placed at the top of the front page next to “The statement of the leader that free and fair elections are an obvious right of the public should be upheld,” former President Mohammad Khatami said. The juxtaposition of the two stories seems to suggest that reformists are gaining the upper hand and reasserting their authority on Iran’s political landscape.

Ebtekar: “The number of centrifuges Iran will keep operational has yet to be decided,” Iranian Deputy Foreign Minister Abbas Araghchi said in reaction to reports that Tehran has agreed to decrease the number of its nuclear centrifuges.

The front page of Ebtekar also features a photo of Henry Kissinger under its masthead. It is captioned “‘Iran’s influence is on the rise, the great strategist admits’”. The article seems to refer to recent comments by the former US secretary of state that he considers “Iran a bigger problem than ISIS”. 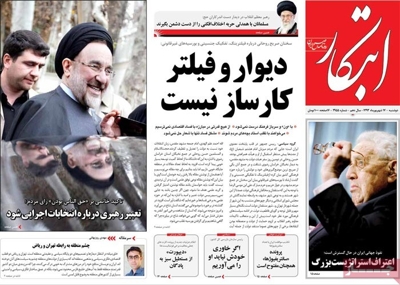 Ettela’at: “In the fight against corruption, my government is afraid of no force,” the president says in a speech in Khorasan Razavi.

Ettela’at: The Iraqi military launches a major offensive in Haditha with US air cover. The US Defense Department says IS militants sought to capture the Haditha Dam. 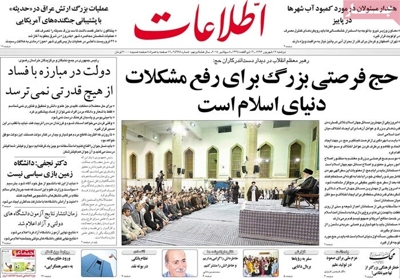 Hemayat quotes State Inspector GeneralNasser Seraj as saying, “If Khavari failed to return home to face corruption charges, we’d force him to.” Khavari is the former managing director of Bank Melli who is wanted in connection with embezzlement. He retired his position in 2011 and fled to Canada before an investigation was launched into his role in the financial scandal. 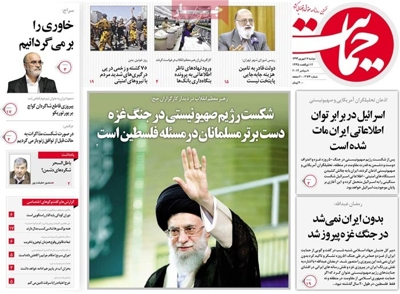 Hambastegi: “The international coalition against IS which has failed to take account of security considerations in the region has failed,” said the secretary of the Supreme National Security Council. 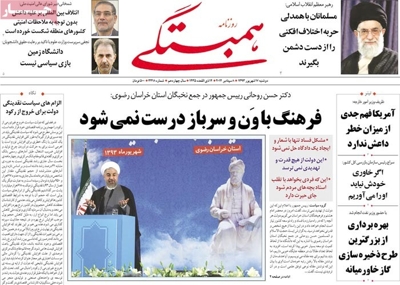 Arman-e Emrooz: “I hope a brave moderate parliament which brings together experts will emerge [in the wake of next parliamentary elections]” former President Mohammad Khatami said.

With the annual Hajj pilgrimage on the horizon Arman-e Emrooz quotes Chairman of the State Expediency Council Akbar Hashemi Rafsanjani as asking, “What good has the cold war with Saudi Arabia done to us?” 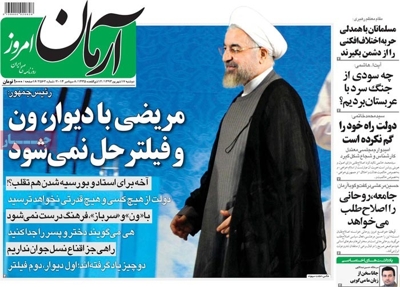 Asia quotes The Independent in Britain as reporting, “David Cameron hopes to meet Iran’s President Hassan Rouhani [in New York]” and says the British premier seeks to transform a political alliance through the meeting. 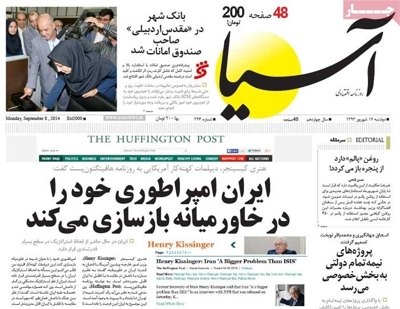 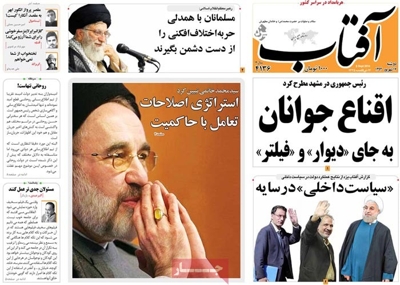 Afarinesh: “Some 1.97 million new students will be admitted to universities (across the nation) this new academic year.”

Afarinesh: An exhibition on the role of Information Technology in Digital Media is under way in Tehran. 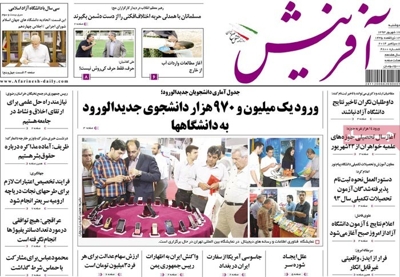 Abrar: “I am optimistic about nuclear talks [between Iran and the world powers],” said Danish Foreign Minister Martin Lidegaard at a joint press conference with his Iranian counterpart Mohammad Javad Zarif.

Abrar: The Iraqi Kurdistan Region welcomes the formation of an international coalition to fight IS terrorists. 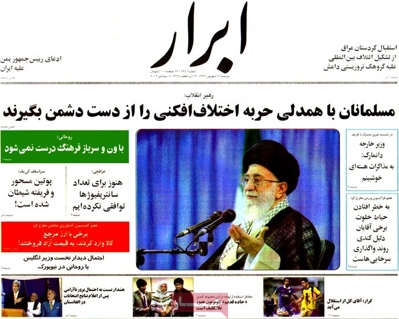 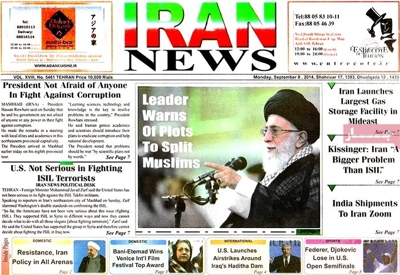 Resalat: “Banks have fanned the flames of inflation by getting involved in the foreign currency, gold and housing market,” a number of manufacturers said in a letter to the Supreme Leader. 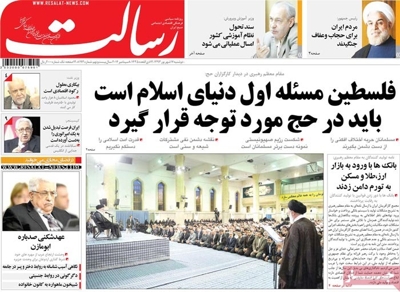 Shahrvand: “Use of soldiers and police does not help promote culture,” President Hassan Rouhani said. 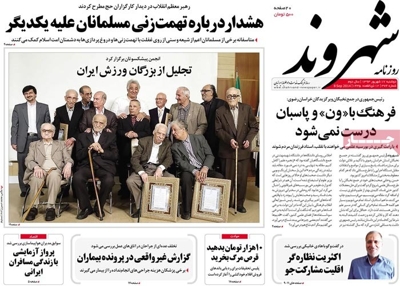 Asr-e Eghtesad: “A Russian delegation has come to Iran to pursue food and oil purchases,” the head of Iran-Russia Chamber said. 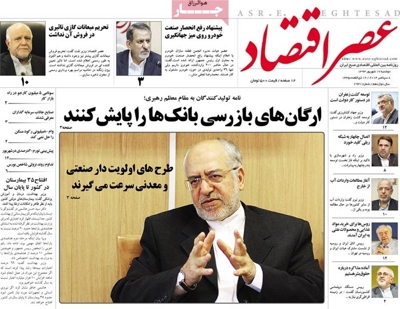 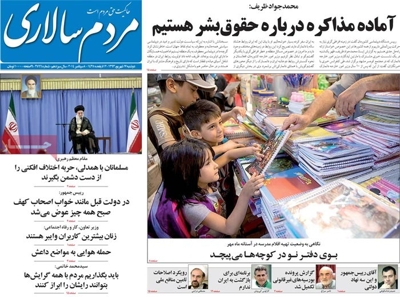 Salamat: As part of a government strategy to reduce birth by C-Section, government is to offer free-of-charge hospital services for natural childbirth. 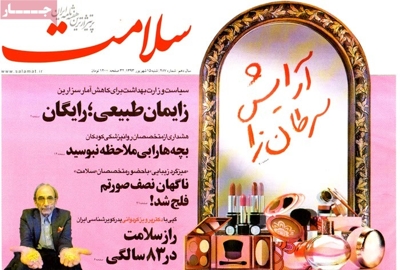 Etemad: The State Expediency Council paves the way for provision of healthcare insurance to all drug addicts.

Etemad: “Principles of reformism are obvious…. I don’t detect any U-turn in President Rouhani’s policies…. Society does not turn democratic overnight…. We need to support the government and understand its problems…. The State should be tolerant and not get agitated,” Mr. Khatami tells a host of reformist students. 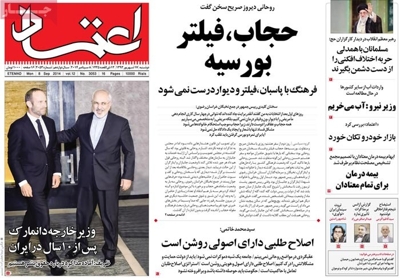 Javan leads on the comments of the Supreme Leader under the title of “The victory Palestinians scored in Gaza showed [Muslims] can take on any enemy. Muslims have gained the upper hand in the Palestinian conflict.”

Javan has expressed displeasure over the award prominent Iranian film director Rakhshan Bani-Etemad has scooped in the Venice Film Festival in an article titled, “The award for the fabricated Tales by Bani-Etemad was guaranteed in advance.” The newspaper claims that it is not the first time Iranian movies which are designed to “paint a gloomy picture” are welcomed with open arms in international festivals. In order to lend credence to its claims that Bani-Etemad does not care about social norms and values, the paper digs out a one-year-old statement of the director: “I am not born at a time when anyone can prevent me from directing movies.” 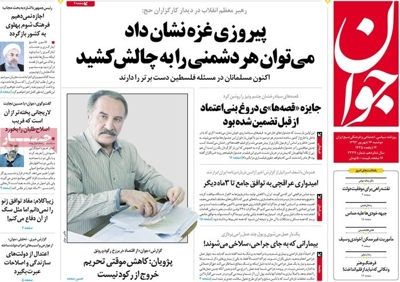 Iran quotes US President Barack Obama as saying that extremists, and not Iran, are the problem of the Middle East region.

Iran: The services of veteran Iranian athletes are praised at a ceremony. 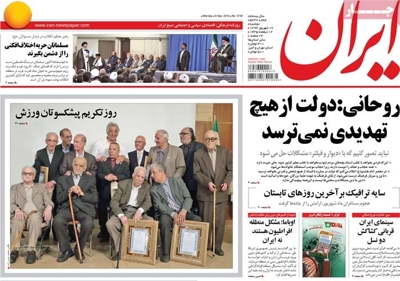