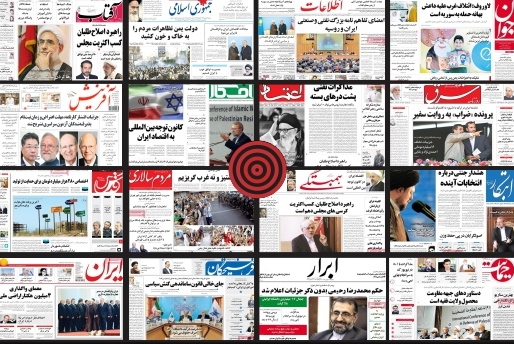 Iranian newspaper headlines across the country on September 10

Most Iranian newspapers on Wednesday gave front-page coverage to the Kazakhstan visit of President Rouhani during which deals were signed that will eventually see the volume of bilateral trade increase five-fold. Drawing as much attention was the signing of an MOU by Iran and Russia to boost economic and trade ties.

Abrar: EU foreign policy chief Catherine Ashton has said the world is determined to cut a good deal with Iran. 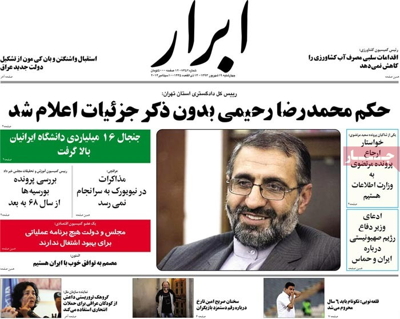 Abrar-e Eghtesadi: “An influx of dollars through Chinese financing” is the headline the daily has picked to highlight the eventual outcome of an accord struck by the presidents of Iran and China. 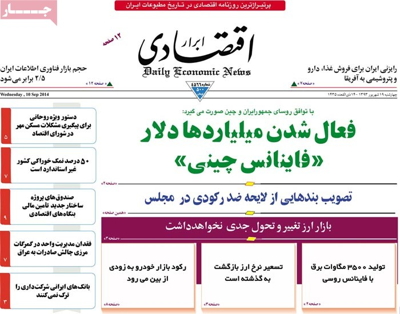 Afarinesh: “Angry reaction from Tehran to a meeting organized by a separatist anti-Iranian group in Baku” was the title of a news story which suggests from time to time the World Azerbaijani Congress seeks to drive a wedge between Tehran and Baku. 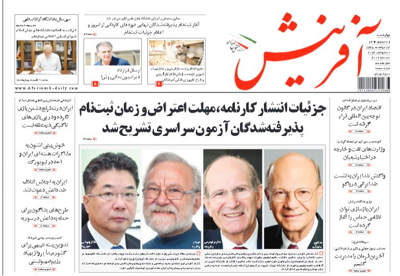 Afkar quoted the president as saying, “Iran’s economy is under the international spotlight.” The president says robust human sources and extensive infrastructure brighten the prospects of investment in the country in the next two decades.

Afkar: Iran’s ambassador to the UN calls for Israelis responsible for crimes in Gaza to be brought to justice.

Aftab-e Yazd: An attack by armed terrorists on a checkpoint in Saravan [a town in southeastern Sistan and Baluchestan Province] was foiled by Iran’s Islamic Revolution Guard Corps.

The editorial of Aftab-e Yazd by former MP Heshmatollah Falahatpisheh says the green-light of the Iraqi parliament to the broad-based cabinet of Prime Minister Abadi is a perfect manifestation of unprecedented political maturity. “If Iraqi politicians manage to persuade their followers to cooperate with their rivals, they have taken a giant step toward solving the problems the nation is facing.” 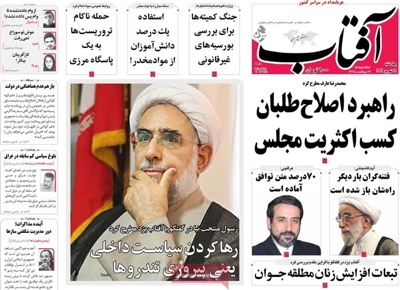 Asia reports on a meeting between Presidents Rouhani and Nazarbayevduringwhich both sides voiced readiness to raise the volume of ties five times. 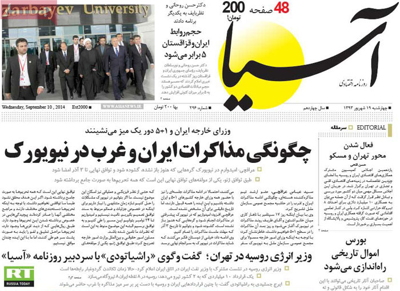 Ebtekar:“Jannati issues warning about upcoming elections” is the lead story of the paper. The Secretary of the Guardian Council says he is in possession of evidence that some are trying to win a majority in parliament once the nuclear dispute is settled. “The seditionists think the stage is set for their comeback. They are nurturing sinister plots.”

Ebtekar: “The Islamic Revolution’s line of thinking is opposed to empire-building. Our revolution only seeks to establish unity among Muslims,” Iranian Parliament Speaker Ali Larijani says in reaction to comments by US strategist Henry Kissinger that Iran’s clout in the Middle East gives it “the opportunity to reconstruct the ancient Persian Empire”. 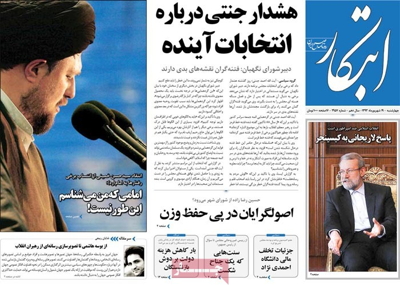 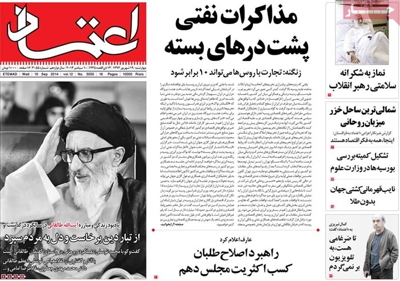 Ettela’at also covers the same story under “An oil and industry agreement between Iran and Russia”. 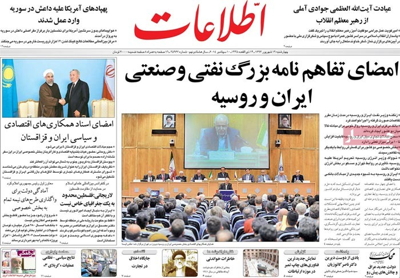 Farhikhtegan: “Dominance of news outlets has been shattered,” said Mohammad Mehdi Forghani, underlying the spread of information on social networks. 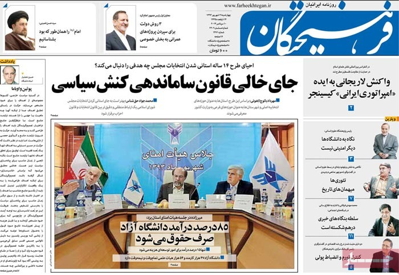 Hambastegi quoted President of Omid [Hope] Foundation Mohammad Reza Aref as saying, “The reformist strategy should be focused on grabbing a majority of seats in the 10th parliament.” 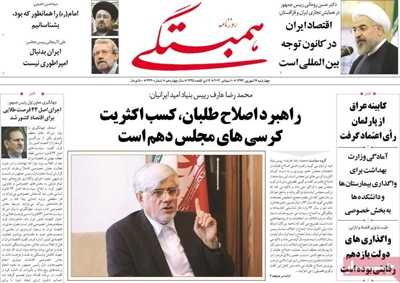 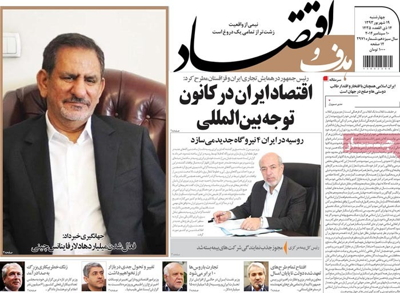 Hemayat: “The Executive branch has no right to make changes to judicial bills the Judiciary sends to parliament for approval,” the deputy of the judiciary chief said. 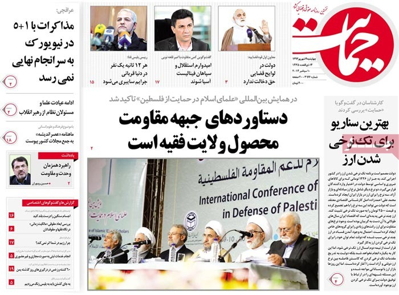 Iran: “A panel has been formed at the Ministry of Science, Research and Technology to investigate illegal scholarships granted [when the previous government was in office],” the acting science minister said. 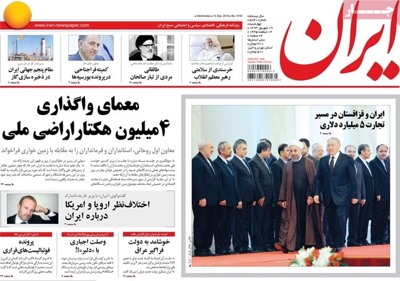 The front page of Javan also features the image of a student holding up a notebook with the photo of a martyred nuclear scientist and a famous athlete on its cover to suggest that “stationery bearing the photos of nuclear heroes are best sellers”. 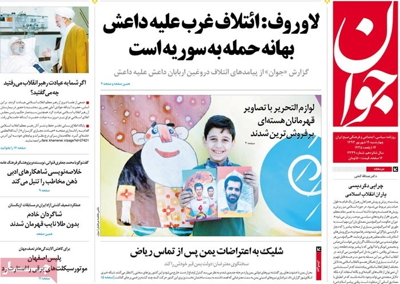 Jomhouri Islami: “In the five months to August 22, 2014 non-oil exports have registered a 20-plus percent increase,” the Iranian first vice-president said.

Jomhouri Islami: The Yemeni government has launched a bloody crackdown on protesters. 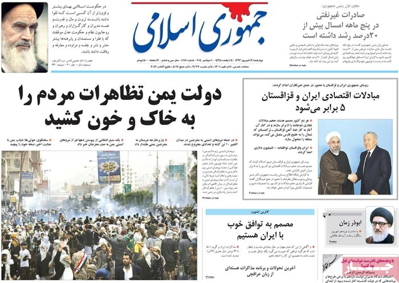 Mardomsalari quotes the head of Tehran Justice Department as saying that publication of the court verdict in the case involving [former Vice-President] Mohammad Reza Rahimi has been legal. 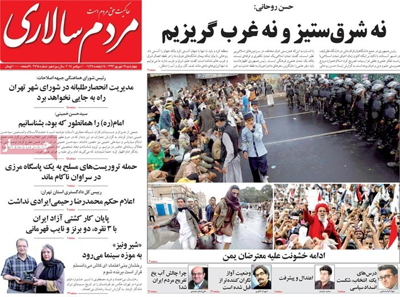 Nasl-e Farda: “Provincial governors who let their political tendencies interfere with their jobs will be expelled,” the interior minister said. 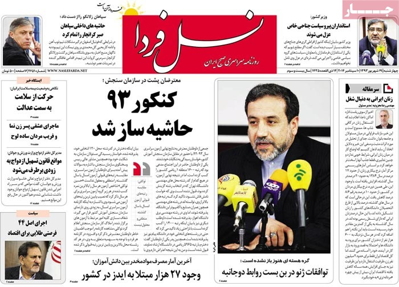 Payam-e Zaman: “The number of jobless Iranians stands at around 6 million. Failure to act now will see the figure rise to 10 million in less than a decade,” the Iranian labor minister has warned. 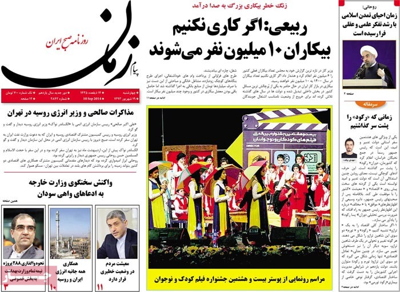 Quds: Residents of towns home to 200,000 people or more would directly vote for their mayors if the Islamic Consultative Assembly gave its green-light to the move. 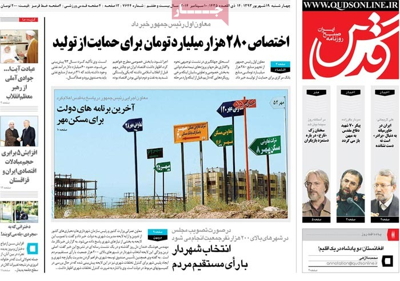 Sharq: “Withdrawal of 16 billion tomans from government coffers and depositing it, during the final days of the Ahmadinejad government, in an account belonging to a university the former president had yet to establish was illegal,” said the prosecutor of the Supreme Audit Court. 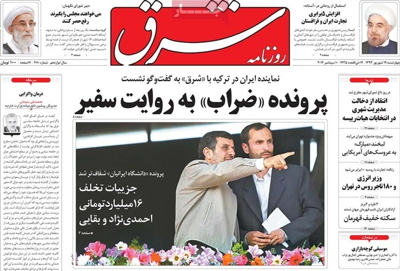