A look at Iranian newspaper front pages on Sept. 17

Today this section of IFP features a closer look at the front pages of as many as 20 newspapers.

Several Iranian newspapers on Wednesday highlighted the comments of the commander of the Islamic Revolution Guard Corps Major Gen. Mohammad Ali Jafari who said the government of President Rouhani has the support of the revolutionary guards. The arrival of Iranian nuclear negotiators in New York for talks with P5+1 also was on the front pages of a few Persian-language dailies.

Abrar: Kuwait says it will not mediate to bring Iran on board in the fight against ISIL. 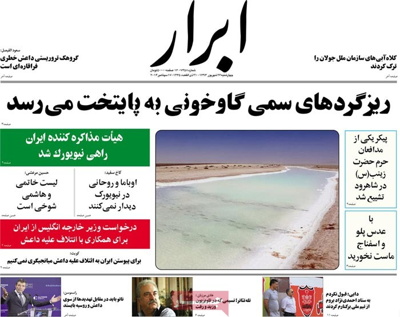 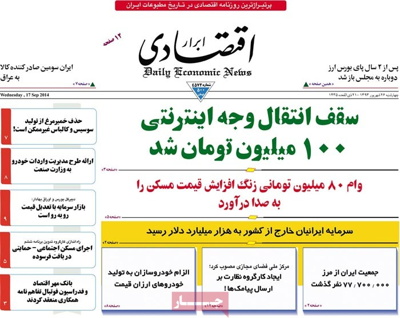 Aftab-e Yazd put a large image of Chairman of the Expediency Council Akbar Hashemi Rafsanjani whispering cordially with Seyyed Hassan Khomeini, the grandson of the founder of the Islamic Republic, on its front page. It was captioned “Important warnings by the grandson and close follower of Imam”. On page six of the same daily the two are reported to have taken a swipe at radicals. The daily quotes Hassan Khomeini as saying that independence and peaceful coexistence with the rest of the world were the pillars of Imam Khomeini’s line of thinking. “Peaceful coexistence does not mean that we have to let go of our independence. Similarly, preserving independence does not mean that we have to take on the world.”

Aftab-e Yazd: Hamid Baghaei [the former secretary of the Supreme Free Zones Council under Ahmadinejad] rented out the property of the council to himself, said Vice President Akbar Torkan. His comments came as a complaint by Rouhani’s government against the previous administration is under examination by the judiciary. The government alleges that one year on, public property and cars used by some officials of Ahmadinejad’s government have not been handed back.

Aftab-e Yazd quoted Minister of Culture and Islamic Guidance Ali Jannati as saying that the number of banned newspapers and publications has fallen. 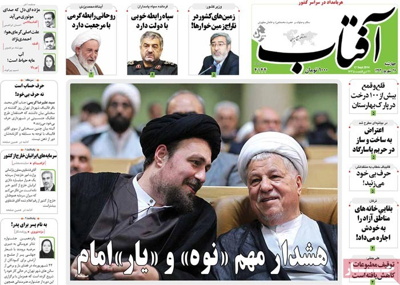 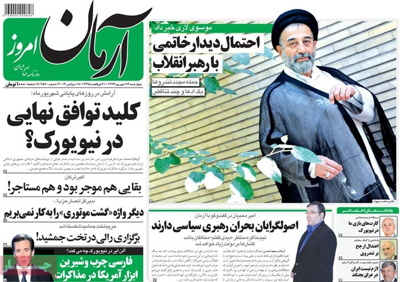 Ebtekar:Following warnings by Interior Ministry officials that Ansar Hezbollah need official permission to enforce morality laws, the secretary of the group tones down his rhetoric and says, “The responsibility to enforce the law falls on officials who, God willing, will be more active in fulfilling their responsibility.” Abdolmajid Mohtasham went on to say, “We are focused on dishing out verbal advice.”

Ebtekar: “Iran has an advisory rather than military role in Iraq,” said the commander of the Islamic Revolution Guard Corps.

Ebtekar: “The government has the backing of the leader. Establishing cordial relations with the clergy is one of the fundamental measures of the government,” said Ayatollah Mohammad Yazdi, a former judiciary chief who now heads the Association of Qom Seminary Scholars. Eghtesad-e Pooya: “The interior minister has required provincial governors to set up special headquarters to crack down on land-grab.” Ettela’at: “Support for the government is part of IRGC policy,” the commander of the revolutionary guards said. 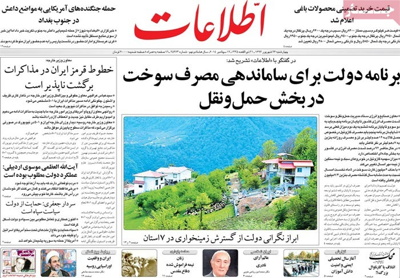 Hambastegi: “Honesty is instrumental in the success of the nuclear talks,” said the chairman of the State Expediency Council. 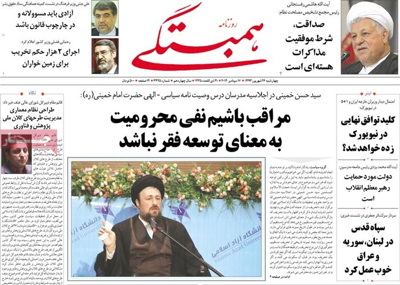 Hemayat: A 50-page-long response pinpointing the legal problems of a recent report by the UN chief on human rights in Iran has been sent to the United Nations.

Hemayat quoted the police chief as saying, “The good management of the Judiciary Chief Ayatollah Sadeq Larijani has pushed down crime rates in recent years.” 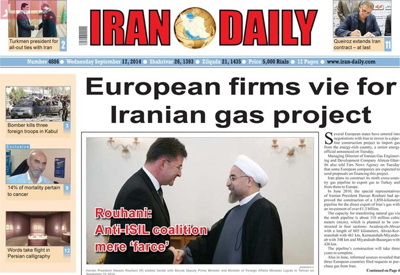 Javan: Carlos Queiroz, the Portuguese head coach of Iran’s national soccer team, has renewed his contract to remain at the helm of the Iranian squad. “Don’t ask me to make any promises,” he said after signing the deal. Jomhouri Islami: James Baker, a former US secretary of state, has admitted that the First Persian Gulf War set the stage for the emergence of ISIL. 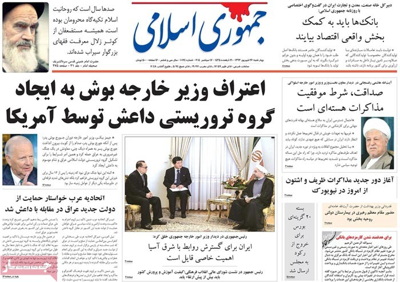 Kar va Kargar: “Imposition of further sanctions at a time when nuclear talks are underway is not justifiable,” said Chairman of the State Expediency Council Akbar Hashemi Rafsanjani. 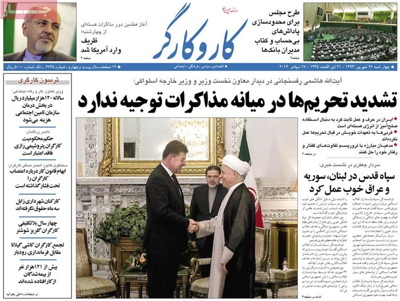 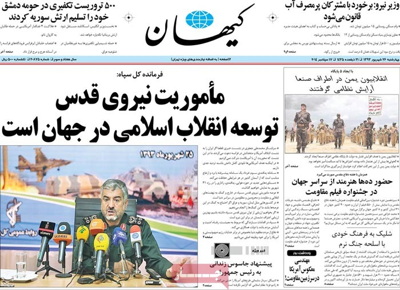 Mardomsalari: Iranian officials have arrested 27 Afghan nationals who used the IDs of deceased Iranians to get cash subsidies. 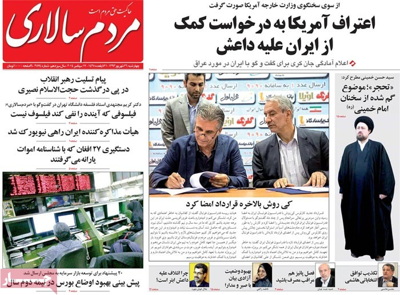 Nasl-e Farda: “Chinese President Xi Jinping is to pay a visit to Iran” after President Rouhani invited him for a state visit.

Nasl-e Farda: “The most controversial episode of the TV sport program “90”” was the heading of a report that covered comments by former coach of Iran’s national football team Ali Daei. During the popular program, which is said to be the most-watched TV show in Iran, Daei said he was sacked as the national team’s coach on the direct orders of former President Ahmadinejad. Quds: “Twelve new aircraft are to be added to the Iranian fleet,” said the minister of roads and urbanization. 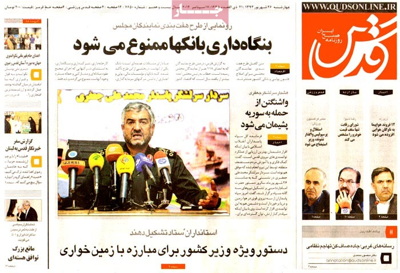 Roozan: “The suffering inflicted on the country during the eight years Ahmadinejad was in office was far more than that of the 8-year Iran-Iraq war,” said Parviz Kazemi, a former minister of welfare and social security under Ahmadinejad. 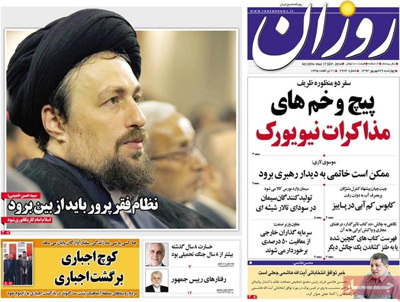 Shahrvand: Up to 100 hectares of protected land on the Iranian island of Ashooradeh in the Caspian Sea has gone up in flames. 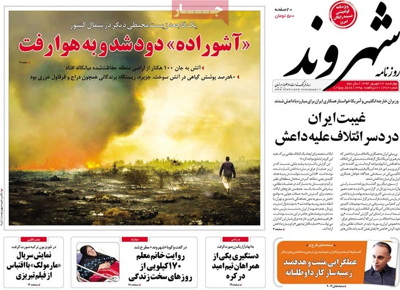 Sharq: “Portrayal of problems on the big screen does not amount to spreading poison,” said Rakhshan Bani-Etemad after her movie “Tales”, which scooped the best award for screenplay at the Venice Film Festival, came under fire at home for what some alleged was a shot at painting a negative picture of the Iranian establishment. 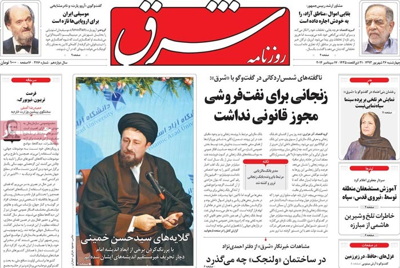