A look at Iranian newspaper front pages on Sept. 16

Today this section of IFP features a closer look at the front pages of as many as 19 newspapers.

Most Iranian newspapers on Tuesday put the comments of Supreme Leader Ayatollah Khamenei upon leaving a Tehran hospital where he underwent prostate surgery on their front pages. “American claims that it seeks to downgrade and destroy IS are unfounded and self-serving,” most headlines read. Upcoming talks between Iran and P5+1 in New York also drew a lot of front-page attention.

Abrar: “As many as 45 million Iranians suffer from inadequate nutrition,” said a member of Parliament’s Agriculture Committee. 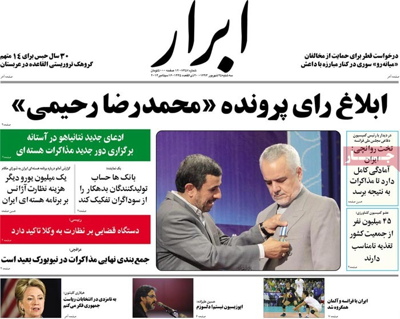 Afarinesh: “If extremist currents are not contained, they are likely to end up like the Islamic State,” warned Chairman of the State Expediency Council Akbar Hashemi Rafsanjani.

Afarinesh placed a report under the heading of “People need calm more than guidance” on its front page. It is true that some social problems such as the violation of the Islamic dress code exist, but people should not take the implementation of the law into their own hands, the report said. It also highlighted that respect for people and their rights is imperative for ensuring calm in society. 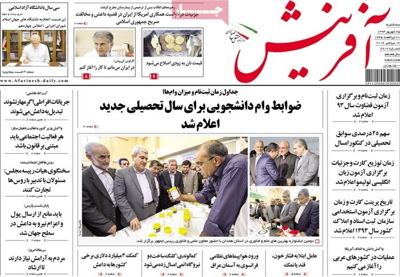 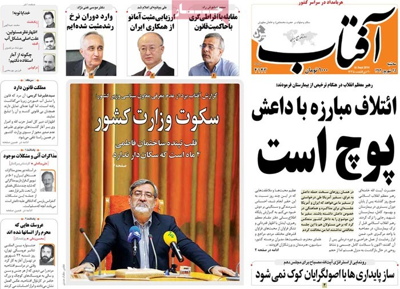 Arman-e Emrooz quoted Qom’s Provincial Governor Mohammad Sadegh Salehimanesh as saying, “A majority of officials in the province have been appointed without my approval.” He went on to say that in late December the performance of the managers of state organizations and offices will be assessed and the outcome will play a key role in future decisions as to whether designated provincial officials remain in office. He added although he did not approve of some appointments, he would cooperate with officials as long as they serve the interests of the province. 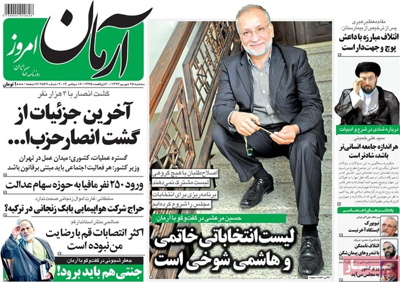 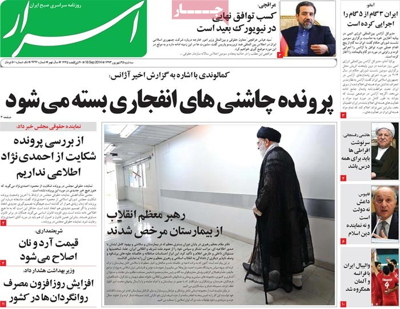 Ebtekar: “As much as $48 billion in tax evasion” is the headline of a report that covers the scourge of underground economy which involves money laundering and also an absence of transparency in Iranian legal businesses. It highlights the need for replacement of oil revenues with taxpayer money to put an end to the heavy dependence of the economy on oil. Wide fluctuations in oil revenues over the past few years have taken a toll on Iran’s economy.

Ebtekar: “The verdict in a case involving former Vice President Mohammad Reza Rahimi was officially handed down” was the headline that the daily put on its front page about the case which has generated a lot of heat in the papers of late. Mohammad Reza Rahimi, who was charged with corruption, was sentenced to jail term and fines. In reaction, his attorney, Mohammad Reza Naderi, said he would appeal the verdicts straightaway.

Ebtekar quotedInterior Minister Abdolreza Rahmani Fazli as saying, “Any social measure has to be in keeping with the law.” 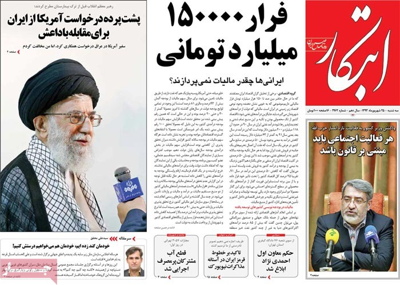 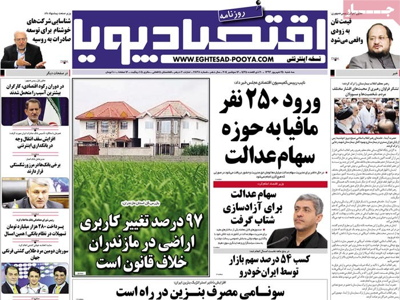 Etemad: Amendment by the Islamic Consultative Assembly of rules governing the implementation of Article 44 of the Constitution [which deals with privatization of state companies] will inject transparency into the workings of 25 economic institutions.

Etemad: The Palestinian ambassador to Iran said the right of Palestinians to return home is not negotiable. 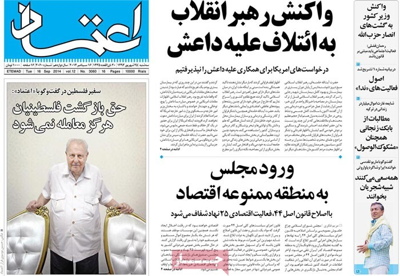 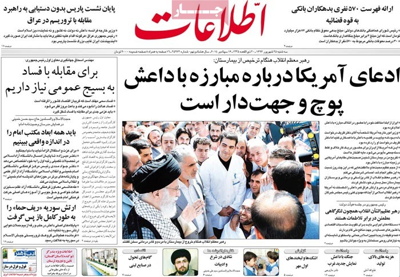 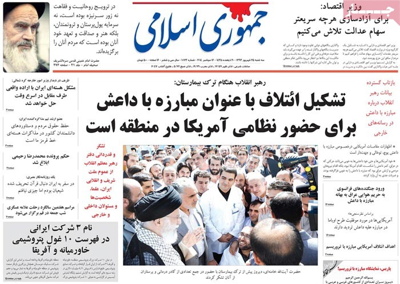 Kaenat: The UN special envoy has warned that Libya is teetering on the brink of utter disarray. 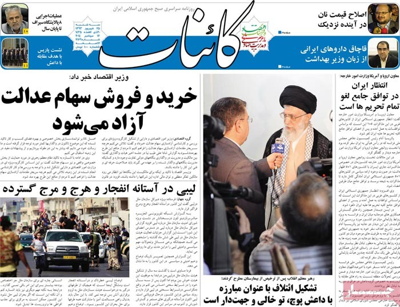 Kayhan: “The meeting in Paris to form a coalition against ISIL (Islamic State of Iraq and the Levant) is a fabrication.” 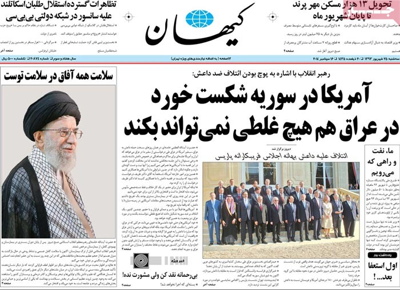 Nasl-e Farda: Iraqi’s President Fuad Masum expressed discontent over the exclusion of Iran from the international anti-terrorism meeting in Paris and said any measure should be taken with Iran’s involvement. 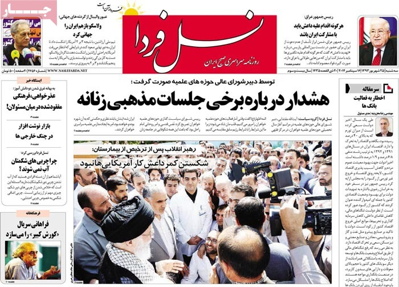 Payam-e Zaman quoted Deputy Foreign Minister for European and American Affairs Majid Takht-Ravanchi as saying, “If P5+1 is politically determined, Iran is all set to see the nuclear negotiations produce a final deal. In case of a sweeping agreement, Iran expects Western countries to lift all sanctions.” 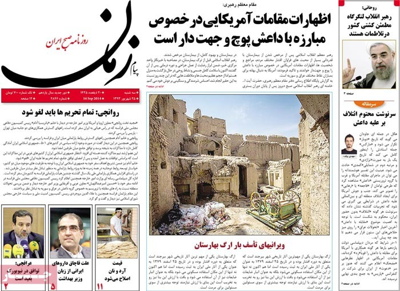 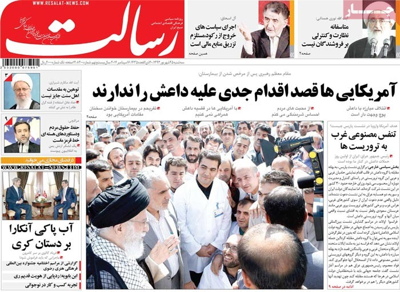 Roozan: “Bringing the Iran-Iraq war to an end was the most valuable service Hashemi delivered to the country,” university Professor and political analyst Sadegh Zibakalamtold the daily in an interview. 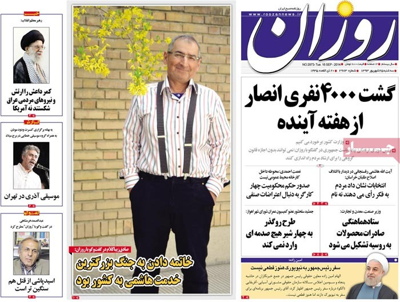 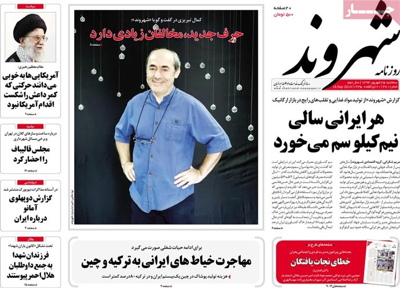 Sharq: “Tehran’s Mayor Mohammad Bagher Ghalibaf was summoned to parliament.” MPs cite the municipality’s failure to heed city councilors’ calls to scuttle a construction project in Madar Park and improper behavior of some municipality contractors as the reason why the mayor has been called in by the chamber for some explanations. 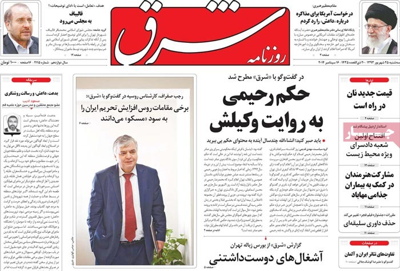 Tafahom: The director of the oversight body at the Health Ministry said hospitals have been given six months to say whether or not they are interested in opening a special ward for foreign patients. The initiative is intended to boost medical tourism. 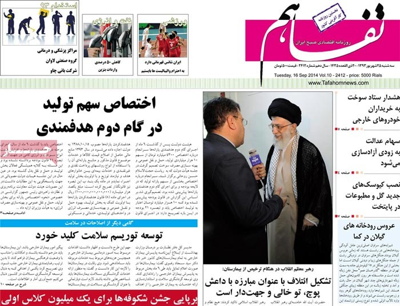