A look at Iranian newspaper front pages on Sept. 24

IFP had a look at front pages of 21 dailies.

What dominated the front pages of dailies Wednesday centered on the comments of President Rouhani at a UN Climate Summit as well as at a meeting with senior editors of some American news outlets. Speculations by political experts about the outcome of ongoing nuclear talks in New York were among the big stories of the day.

Abrar: “Minster of Road and Urbanization is headed for impeachment.”

Abrar: “Ghalibaf’s opinion about the election of mayors [by popular vote]” is the headline of a report about a bill which suggests that towns with populations of over 200,000 people could directly elect their mayors. Tehran Mayor Mohammad Bagher Ghalibaf said, “Appointment or election of mayors is determined by law, but I think what needs to be done is the transformation of rules and the way cities are run.” Uniform Urban Management Services, a bill which, among other things, focuses on the election of mayors, is now under examination by the government and will be later handed to parliament for approval.

Abrar: “I won’t act arbitrarily at the [Media] Supervisory Board,” said Hassan Kamran after he was voted by MPs to take the seat vacated by Ali Motahari. He stressed that he would comply with the law. 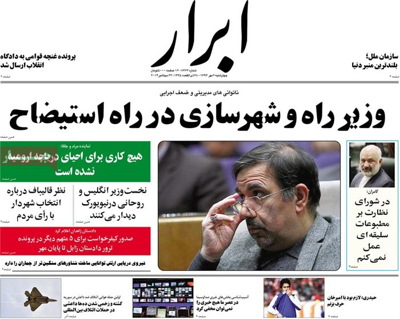 Abrar-e Eghtesadi: “The first wide-body Airbus A380 is to touch down at Imam Khomeini Airport [on September 30].” The report in the daily says since the airport enjoys high technical capability, Emirates has applied for some of its A380 planes to land at and take off from the airport. 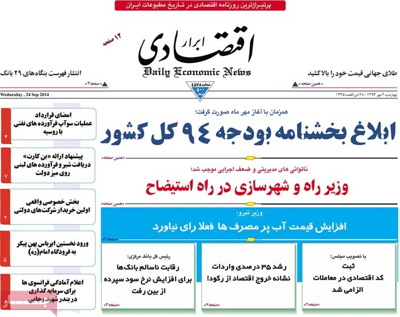 Afarinesh: “Iranian and British top diplomats held talks about the reopening of their embassies.” 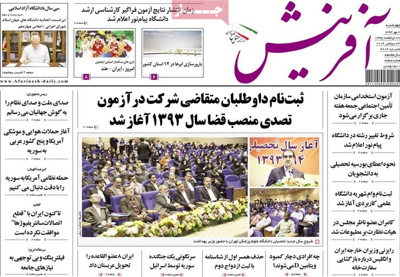 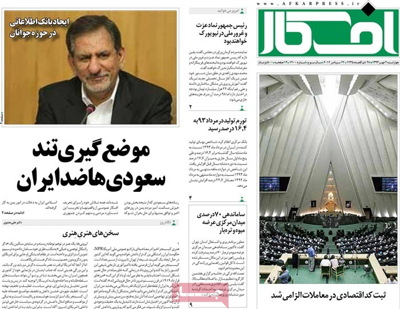 Aftab-e Yazd: “A historic meeting in the Political Olympics” is the title of a piece in which the daily looks at the imminent meeting between President Rouhani and British Prime Minister David Cameron.

Aftab-e Yazd: “Terrific news is around the corner for [Iranian] women,” said Vice President for Women and Family Affairs Shahindokht Molaverdi. In an interview with the daily, she said negotiations about the presence of women in sporting venues are at a final stage and efforts are being made to hammer out a proper and viable way for their presence. 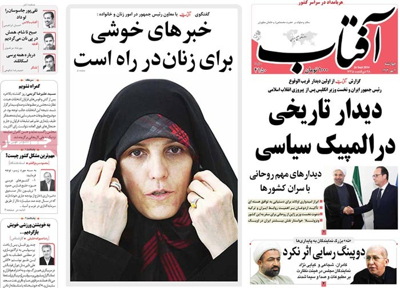 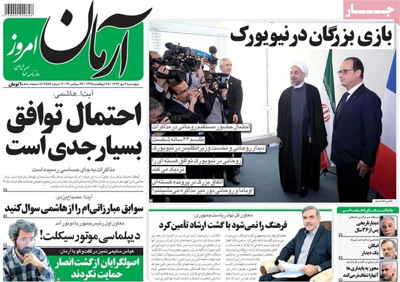 Asrar: “Ahmadinejad’s violation of law has made his comeback to the political landscape impossible,” said Masoud Pezeshkian, a former MP and minister. 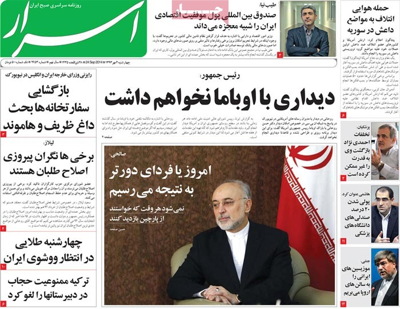 Ebtekar: “Parliament turned its back on the Islamic Revolution Stability Front,” is a report which indicated that contrary to the belief of the front’s advocates, it does not wield as much clout as it was thought. In an in-house parliamentary vote held on September 23 to appoint members of a Media Supervisory Board and an IRIB (Islamic Republic of Iran Broadcasting) Supervisory Board, the front turned out to be unsuccessful. Following the major role that it played in the impeachment of the former science minister, many believed it would prove to be a major player in the vote.

Ebtekar: “A rise in the number of holy sites under the magnifying glass of parliament” is a report about the critical comments of an MP representing Rasht – a northern city – about the growing number of registered holy sites across the country. He accused the Endowments and Charitable Affairs Organization of land-grab. Under law, any place which is registered as a holy site along with an expanse of land in its vicinity will be run under the supervision of the organization. 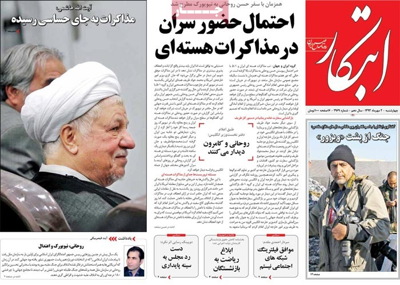 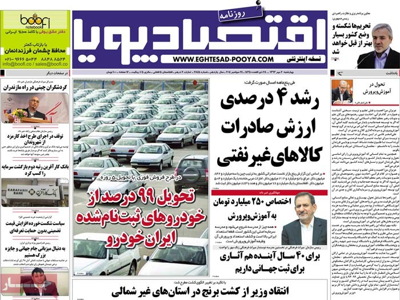 Etemad: “The first US-led attack on ISIL in Syria.” 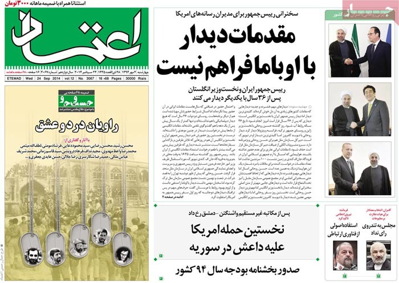 Ettela’at: “Iran’s proposals for the improvement of the global environment” refers to the speech that President Rouhani delivered at the United Nations Climate Summit on September 23.

Ettela’at: Under a new law approved by parliament,those who owe the government as much as 10 million tomans in taxes will face a travel ban. 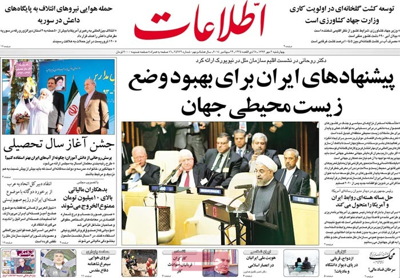 Haft-e Sobh: “A watered down bill which bans bearing bladed weapons finds its way to parliament floor.” The daily posted different opinions about the bill from the perspective of jurists and MPs. 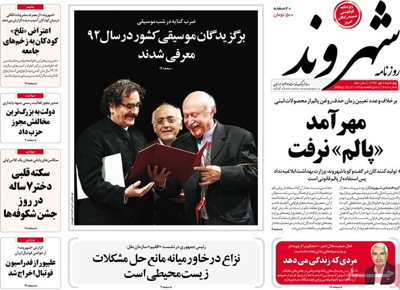 Hemayat: “Take US green-lights with a pinch of salt,” said Deputy Judiciary Chief Gholamhossien Mohseni Ejeie. Criticizing those who believe that an agreement with America can address all our issues, he said “I do not suggest war with America, yet we should not fall for its green-lights.”

Hemayat: “Hollywood-style adventurism is not real fight against terrorism,” said Deputy Foreign Minister for Arab and African affairs Hossein Amir-Abdollahian. He dismissed US-led airstrikes in Syria on the pretext of fighting ISIL as violation of Syria’s sovereignty and international law which paved the way for further meddling in the region. 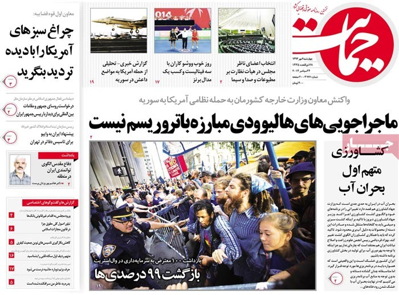 Iran: “Commemoration of the International Day of Peace in Tehran.” 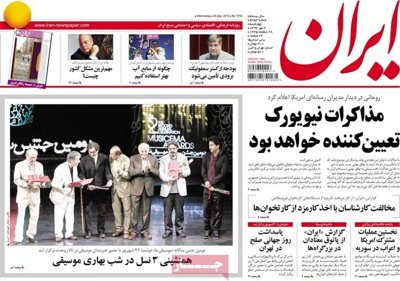 Kayhan: “Yemen is immersed in joy and light; the Yemeni people celebrate their victory.” 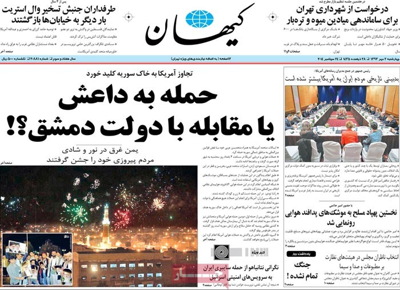 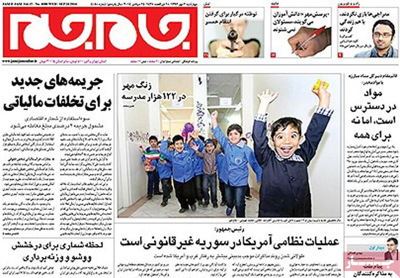 Resalat: “Iran won’t bow to plans imposed by the US,” said Ali Akbar Velayati, an advisor to the Supreme Leader for international affairs. 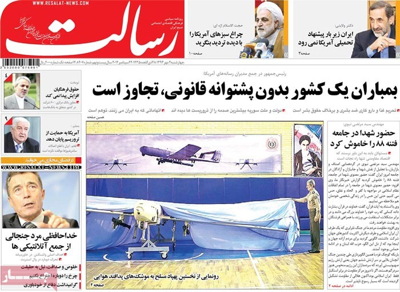 Roozan: “Heidar Moslehi and Seyyed Hassan Khomeini [grandson of the founder of the Islamic Republic] are vying to become the Friday prayer leader of Shemiranat [a small town on the northern edge of metropolitan Tehran].” 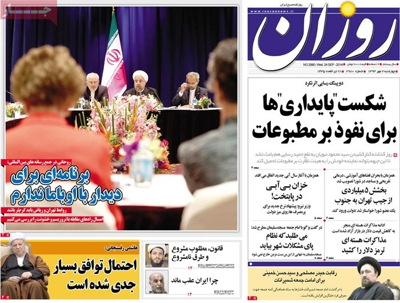 Sharq: “Holding a concert in Iran is my dream,” Sami Yusuf, an Iranian-born British singer-songwriter said in an interview with the daily. 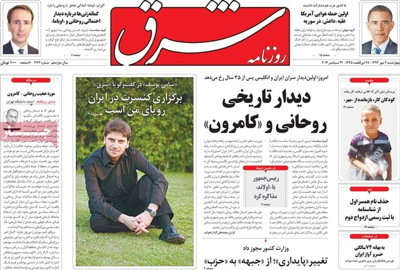 Tafahom: “Ministry of Culture and Islamic Guidance throws its weight behind media which pitch the values of Sacred Defense.” 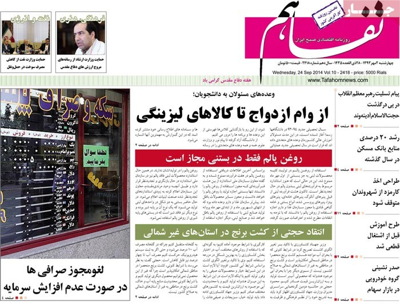