A look at Iranian newspaper front pages on Sept. 20

IFP looked at the front pages of 11 newspapers.

A few stories dominated the front pages of Iranian dailies on Saturday. The most headline-grabbing story was President Rouhani’s interview with NBC News – prior to his visit to New York to attend the United Nations General Assembly – which covered a lot of questions including Iran’s approach to ISIL, and the likelihood of a thaw in Iran-America relations. Another big story was the opening ceremony of Asian Games 2014 in Incheon, South Korea on September 19. On the international front, news of the Scottish no-vote in a referendum to break away from the United Kingdom and the reaction to the outcome was also among front-page reports.

Afkar: The National Iranian Gas Company signed a contract worth $100 million with a European firm. The deal is intended to eventually boost gas pipeline pressure across Iran. 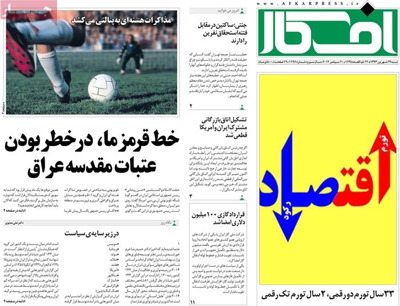 Aftab-e Yazd published comments by Cultural Advisor to President Rouhani Hessameddin Ashena addressed to Secretary General of Ansar Hezbollah Abdolhamid Mohtasham. “The 1990s are in the past.” It came after Ansar Hezbollah announced that it will send motorbike patrols to the streets – like in the 90s – to promote virtue and prevent the violation of the Islamic dress code.

Aftab-e Yazd quoted Secretary General of the Islamic Association of University Professors Mohsen Rahami as saying, “Khatami is more caring than those who claim [to be concerned about the establishment].” His comments came as a letter addressed to the Supreme Leader by former President Mohammad Khatami drew outcry from the rivals of reformists. In the letter Khatami expressed pleasure over the leader’s recovery following his prostate surgery. 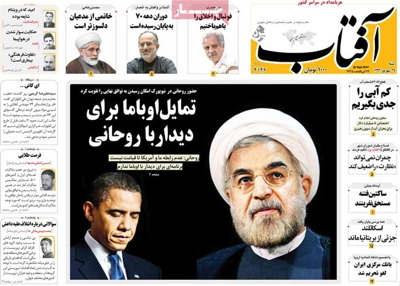 Asia: “US President Barack Obama is open to a meeting with President Rouhani [in New York during the United Nations General Assembly].”

Asia: “Great Britain remained great,” was the headline of a report which referred to the results of a referendum in Scotland on Sept. 18 in which Scots said no to independence from the United Kingdom. NATO and the European Union expressed delight over the outcome of the plebiscite. 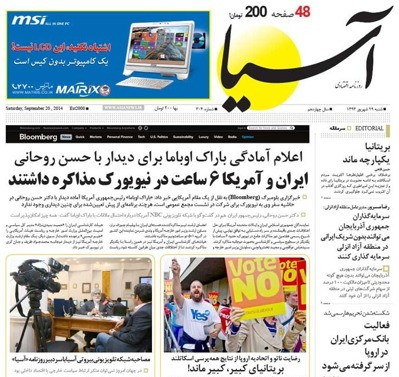 Ebtekar quoted Iran’s Foreign Minister Mohammad Javad Zarif as saying, “I am optimistic [about negotiations between Iran and P5+1 in New York].

Ebtekar: “The break in our relations with the US will not last forever,” said President Rouhani in an interview with NBC News.

Ebtekar: “An attack by bulldozers on historical sites” is a headline that the daily put on its front page to report unauthorized destruction overnight of some historical houses in the vicinity of Shah Cheragh – a funerary monument and mosque in Shiraz, housing the tomb of the brothers Ahmad and Mohammad, sons of the seventh Shiite Imam. In a letter addressed to the Supreme Leader, head of Iran’s Cultural Heritage, Handcrafts and Tourism Organization Masoud Soltanifar called for the leader’s intervention in the issue. 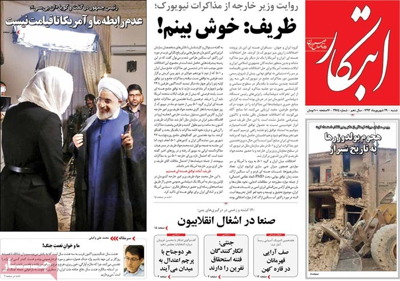 Eghtesad-e Pooya: “The Iran-America joint chamber of commerce is bound to be forged.” 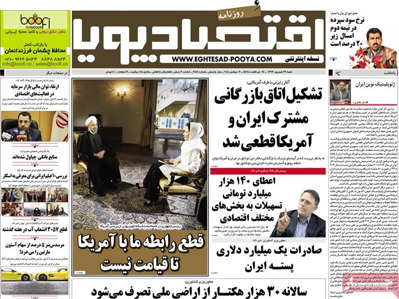 Etemad: “I want to ease tensions between Iran and America,” President Rouhani said in an interview with America’s NBC.

Etemad: “Cigarette consumption has seen a 2-fold rise over the past 5 years, meaning over $3.3 billion has gone up in smoke on a yearly basis.” 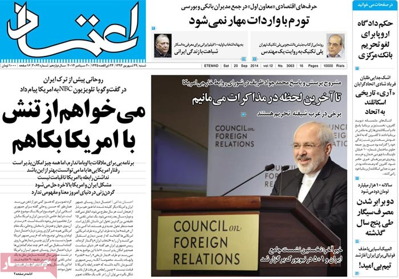 Ettela’at: “A European court has struck down sanctions on Iran’s Central Bank.”

Ettela’at quoted Deputy Minister of Industry, Mine and Trade Ali Ghanbari as saying, “A plan is under examination to push down bread subsidies by almost 30 percent.”

Ettela’at: “Iran’s presence in the biggest sporting event of Asia with 276 athletes” was the daily’s report on the opening of 2014 Asian Games in Incheon, South Korea. 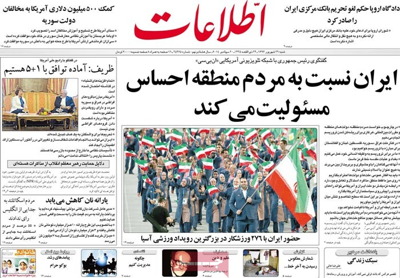 Hadaf va Eghtesad: “A creeping current is trying to play down the role of the founder of the Islamic Republic Ayatollah Khomeini in the 1979 Revolution,” said Hossein Entezami, the deputy minister of culture and Islamic guidance. 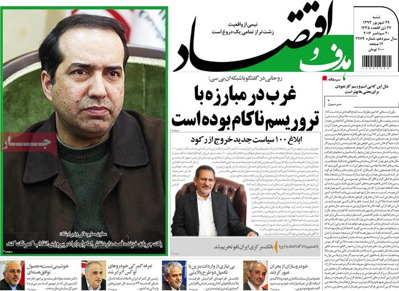 Javan: “Sana’a is one step away from fall to the revolutionaries.” 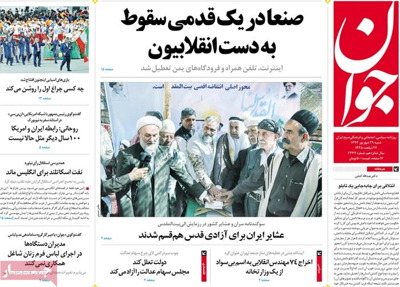 Kayhan: “Seventeen were sentenced to life imprisonment in Bahrain on charges of taking part in anti-government protest rallies.” 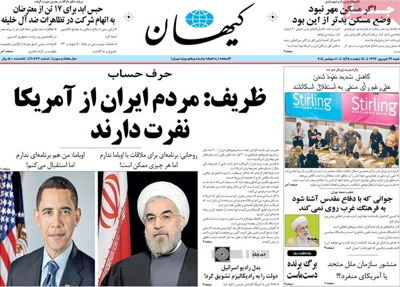 Tafahom: “Taxes on cigarettes should rise,” Health Minister Hassan Hashemi said in a first meeting of the National Headquarters for Tobacco Control, citing the fact that a tax rise can stem the inflow of contraband cigarettes. 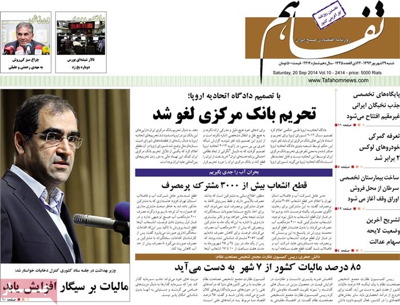