A look at Iranian newspaper front pages on Sept. 15

The championship of the Iranian Greco-Roman wrestling team in the 2014 Greco-Roman World Wrestling Championships in Tashkent and the congratulatory messages the Supreme Leader and President Rouhani issued following the unprecedented victory of Iranian wrestlers were on the front pages of almost all Iranian newspapers on Monday.

The championship of the Iranian Greco-Roman wrestling team in the 2014 Greco-Roman World Wrestling Championships in Tashkent and the congratulatory messages the Supreme Leader and President Rouhani issued following the unprecedented victory of Iranian wrestlers were on the front pages of almost all Iranian newspapers on Monday. Another sport news that drew a lot of front-page attention was the triumph of the Iranian national volleyball team over Serbia in their final clash in round two of the FIVB World Championships in Poland. The comments of Ayatollah Akbar Hashemi Rafsanjani at a meeting of Islamic Azad University in Mashhad grabbed headlines too. The former president was quoted by several dailies as saying that university students had better continue their studies at home.

Afkar: “President Rouhani will fly to New York on September 22nd to take part in the UN General Assembly.” A week later the president will be in Russia to attend a summit meeting of countries on the Caspian Sea. 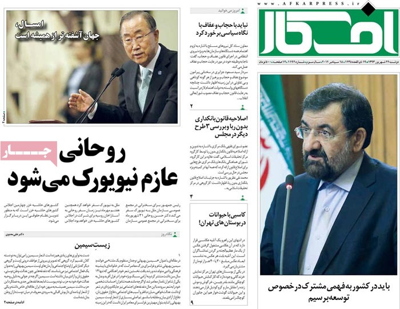 Aftab-e Yazd: “Ansar Hezbollah patrols will hit the streets as of next week,” says the secretary general of the group, which is viewed as a hardline group by the government of President Rouhani. The office of Tehran Governor has denied issuing any permit for the group to enforce morality laws. Interior Ministry officials had earlier said they would seriously deal with those who take the laws into their own hands.

Aftab-e Yazd: A recent spike in contactsbetween moderate state officials indicates a united front is being formed against hardliners. The meeting between Chairman of the Expediency Council Akbar Hashemi Rafsanjani and Parliament Speaker Ali Larijani in Mashhad is the latest such one-on-one. 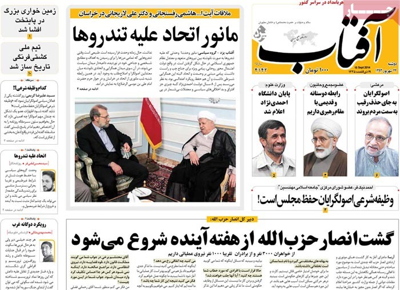 Arman-e Emrooz: “The aftershocks of the letter of Mohammad Khatami [to the Supreme Leader following his prostate surgery] on the political scene” is the title of the daily’s main story which catalogs the “angry reactions” of conservatives to the former president’s decision to write the letter in which he wished the leader a speedy recovery. Some conservatives have gone so far as to say “Reformists seek to impose themselves on the establishment.” 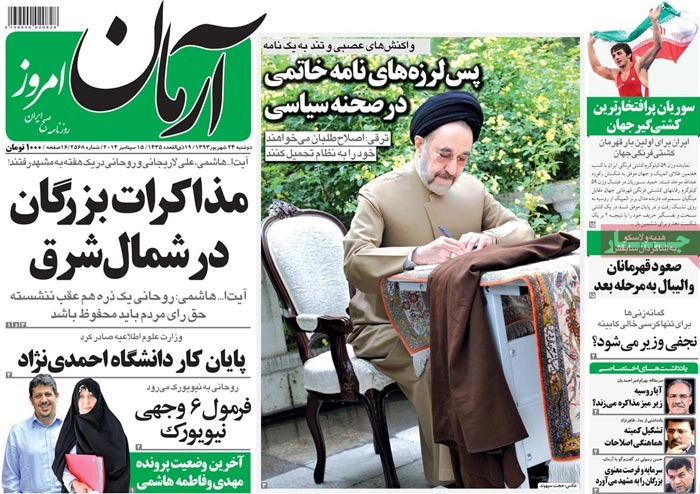 Asia: “The US flag flies outside the City Theater in the heart of Tehran.” 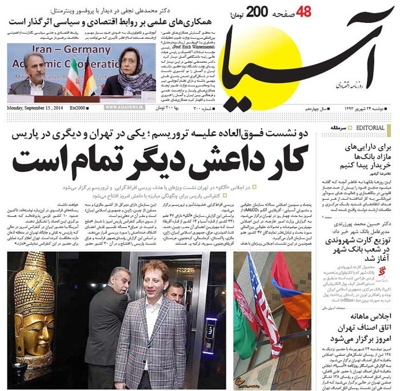 Ebtekar: Revelations that officials with “Iranian University” [a controversial university former President Mahmoud Ahmadinejad has promised to launch ever since he left office in 2013] have made end runs around the law prompted the Ministry of Science to issue a statement declaring the activities of Iranian University as illegal. 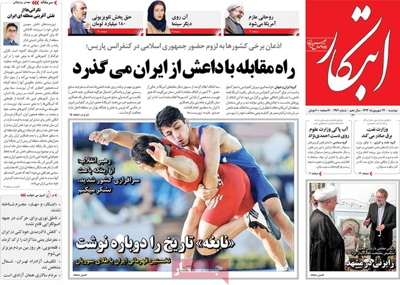 Eghtesad-e Pooya: “Tehran and Moscow have struck a $10 billion electricity deal under which the Russians will, among other things, build a power plant in Tabas,” the Iranian energy minister said. 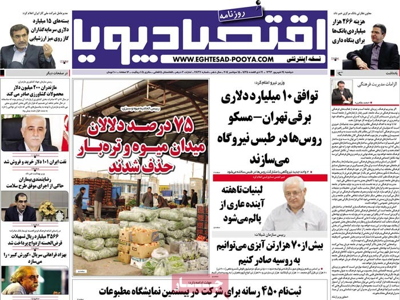 Ettela’at: Representatives of 27 countries will attend a meeting in Tehran shortly to look at the root causes of extremism and terrorism. 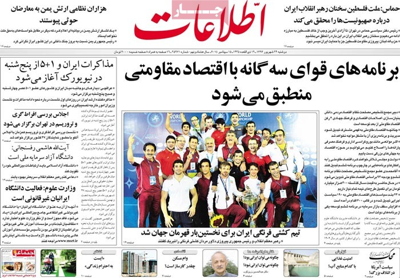 Farhikhtegan: “The Interior Ministry has only two weeks to send a bill on political parties to parliament for approval,” an MP says.

Farhikhtegan: The chairman of the Board of Trustees of the Islamic Azad University describes the management of the university over the past year as satisfactory. 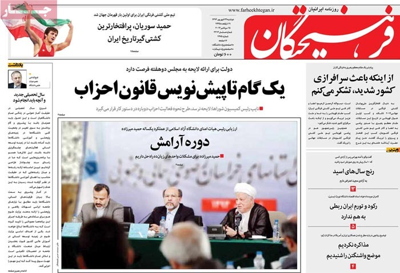 Hemayat: “The UN Secretary General is a tool in American hands,” says former Iranian Foreign Minister Ali Akbar Velayati in reaction to a recent release by the UN chief of a human rights report critical of Iran.

Hemayat: Banks have been given 15 days to release the list of the companies they own. 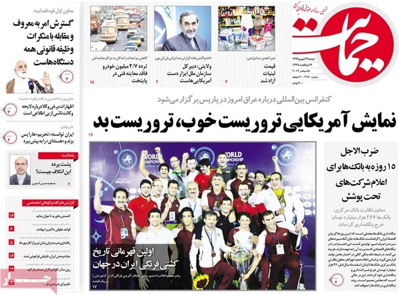 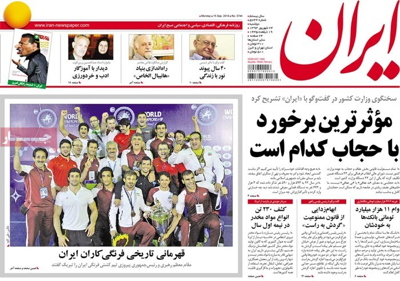 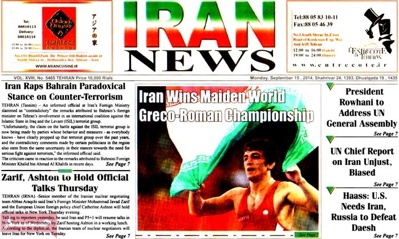 Jahan-e Eghtesad: “The US needs Iran’s support to defeat ISIL,” President of the Council on Foreign Relations Richard Haass said. 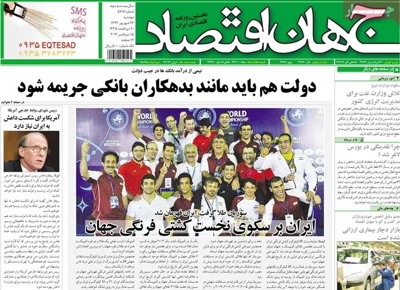 Javan: “The 51-day Gaza war was a small-scale model of the 33-day Lebanon war,” said Middle East expert Dr. Mohammadali Mohtadi in an interview with the daily, adding that the ideology of Zionism is falling from favor in Israel and in its military. He said in the past Zionist soldiers would fight for Israel to safeguard the causes that had been sold to them, now it seems that they no longer fight to defend such ideals.

Javan: “The beheading of a British hostage at the hands of IS has paved the way for London to meddle in Iraqi affairs.” 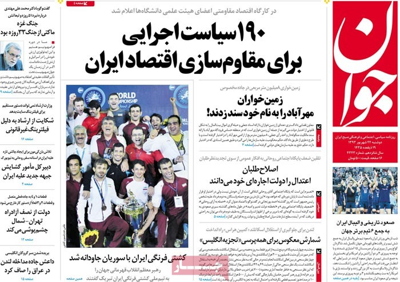 Jomhouri Islami: “It takes patience to get rid of a deviation which has been in the making for eight years,” Ayatollah Rafsanjani told a group of reformists in Khorasan Razavi Province. 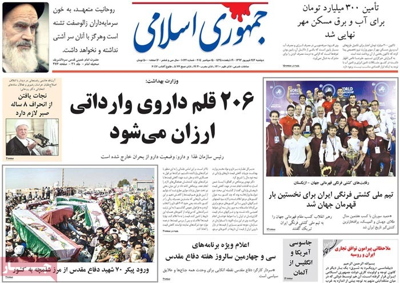 Kar va Kargar: “The number of jobless Iranians is expected to rise to 5 million in seven years,” predicts the Research Center of the Islamic Consultative Assembly. 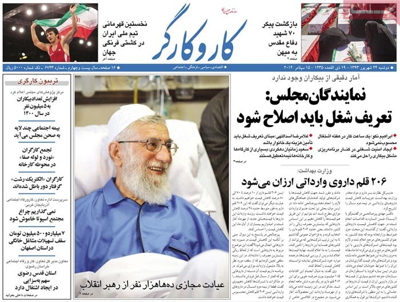 Kayhan: “An entire corps of the Yemeni Army has joined the popular revolution,” was the headline the paper put on its front page. Earlier a large number of high-ranking officers in the army had defected to join the uprising. 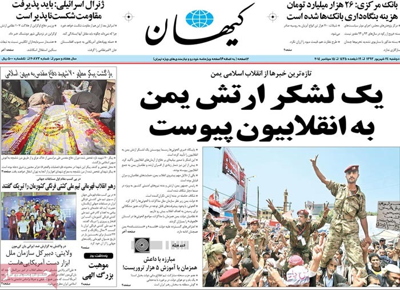 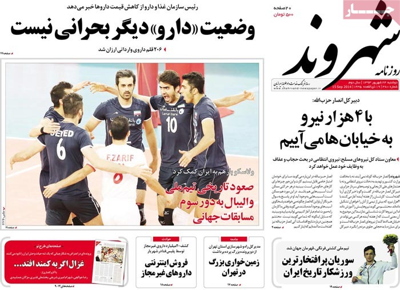 Sharq: “Kargozaran [the party of the Executives of Construction] will rely on Khatami [in the next parliamentary vote],” former Vice President Hossein Marashi told the daily. His comments come as reformists are preparing for the vote in early 2015 and trying to reach consensus probably under Mohammad Khatami’s leadership. 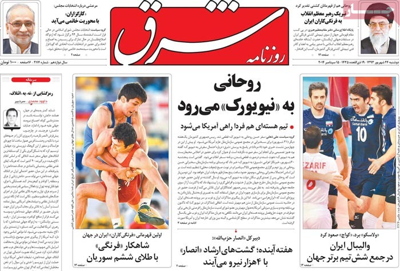