Many Iranian newspapers on Sunday (September 14) led on a second bedside visit President Hassan Rouhani paid to the Supreme Leader upon arriving home from a Central Asian tour which took him to Kazakhstan and Tajikistan, where he attended a summit of the Shanghai Cooperation Organization. The comments Chairman of the Expediency Council Akbar Hashemi Rafsanjani made at a meeting with industrialists and economists drew a lot of front-page attention, too. Of course, different newspapers, depending on their political leanings, chose a different part of his remarks to headline their stories.

Abrar: “The government has filed a complaint against some officials of the previous government,” said President Rouhani’s chief advisor Akbar Torkan. The headline highlights allegations by the 11th government that some officials who served under Ahmadinejad have failed to hand back government-issue cars and other items. 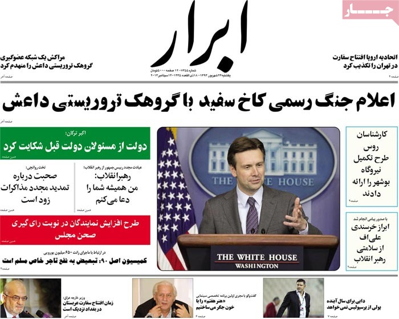 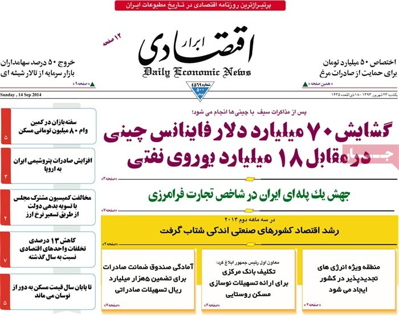 Afarinesh highlights a comment by Interior Minister Abdolreza Rahman Fazli under the heading “Preservation of civic rights is one of the most fundamental policies of the government.” 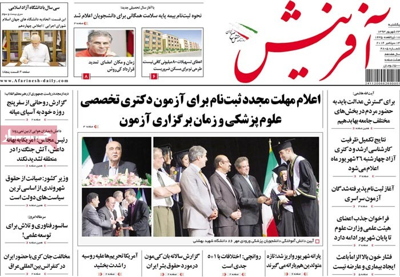 Afkar: “The meeting in Paris is a theatrical gesture,” said Mohammad Saleh Jokar, a member of Parliament’s National Security and Foreign Policy Committee, in reaction to exclusion of Iran from a meeting in Paris to forge an anti-terrorism coalition to take on IS. 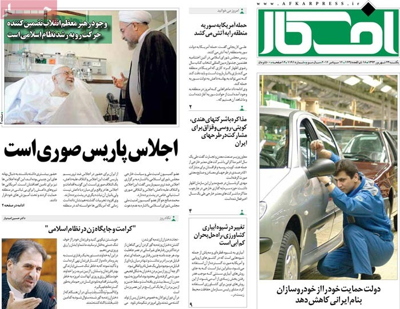 Aftab-e Yazd cited Chairman of the Expediency Council Ali Akbar Hashemi Rafsanjani as saying, “Some members of the previous government are putting a spoke in the wheel of President Rouhani’s government.” 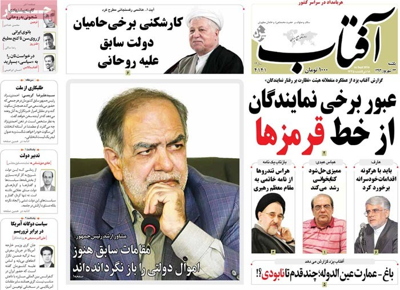 Arman-e Emrooz says that a bill which will eventually see the number of MPs rise by 20 to 310 will be discussed on parliament floor. The daily says the bill has been languishing in parliament for seven years thanks to the previous government’s failure to cooperate with the Islamic Consultative Assembly. 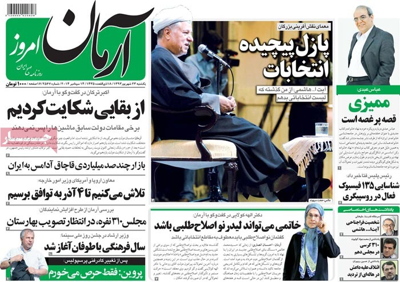 Asia quoted Iran’s deputy foreign minister for European and American affairs as saying, “A final deal can be struck whether or not Presidents Rouhani and Obama meet.” 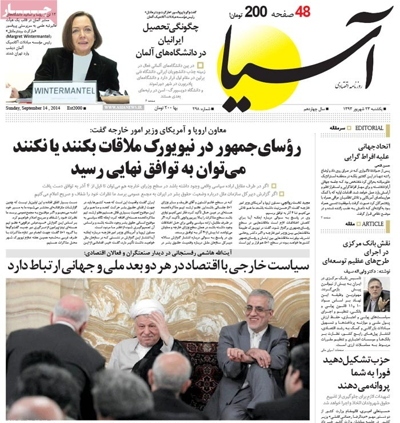 Asr-e Eghtesad led on the story which pins the blame of delays in the implementation of development initiatives on cash subsidies handed out by the governmentto the public. 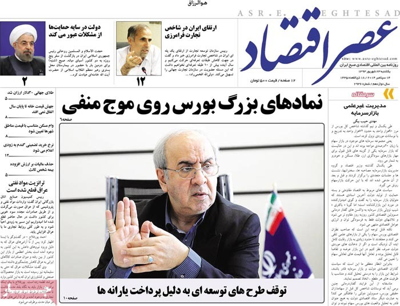 Asr-e Rasaneh: Oil Minister Bijan Namdar Zanganeh says Pakistan is not structurally prepared to import Iran’s natural gas despite its express willingness to do so. 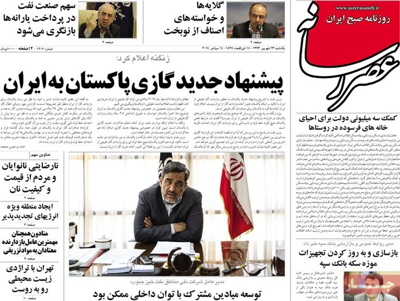 Asrar put a remark by Hashemi Rafsanjani about foreign policy on its front page. “We can establish ties with all countries across the world.”

Asrar alsoquoted Deputy Interior Minister Hosseinali Amiri as saying that no permit has been issued for Ansar Hezbollah members to promote virtue and prevent vice. 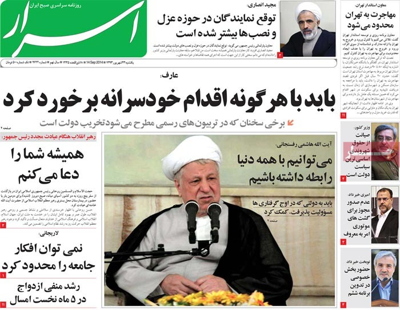 Ebtekar: “We are concerned about the misbehaviors of those who want to promote virtue,” said Parliament Speaker Ali Larijani.

Ebtekar: “I do not know a supporter of the Supreme Leader who is stauncher than Ali Akbar Hashemi Rafsanjani,” said former MP Hassan Ghafouri-Fard. 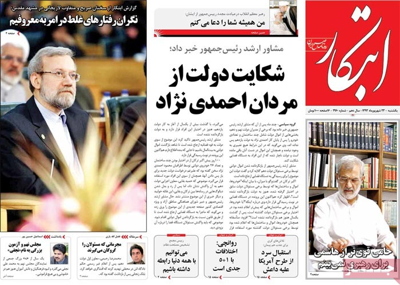 Etemad: Mohammad Bagher Nobakht, President Rouhani’s advisor for supervision and strategic affairs, has called on the private sector to help the government with piecing together the Sixth Development Plan. 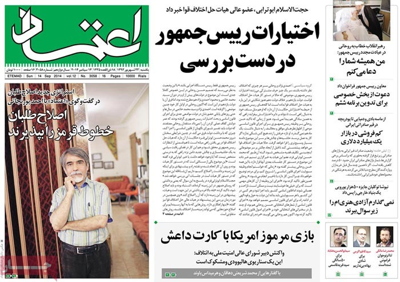 Farhikhtegan dedicates its main story to misinformation [fueled by supporters of former President Mahmoud Ahmadinejad] that the number of Ph. D. seats at Islamic Azad University has increased 8-fold, whereas the actual increase has been no more than 70 percent. 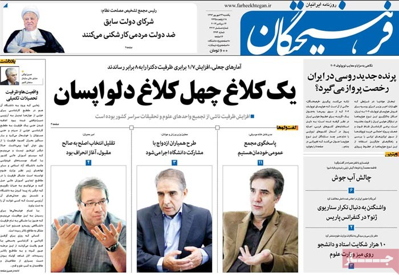 Hambastegi: “Granting licenses to news websites is a top government priority,” the secretary of the Media Supervisory Board says. 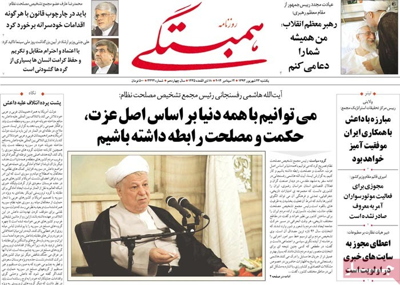 Hamshahri splashes photos of officials and statesmen visiting the Supreme Leader at the hospital following his successful prostate surgery. 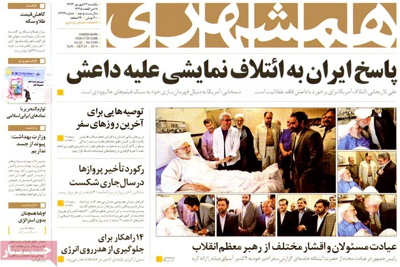 Hemayat: “The presidential powers will be discussed by an arbitration panel which addresses disputes between the three branches of government,” said Deputy Parliament Speaker Mohammad Hassan Abutorabi. 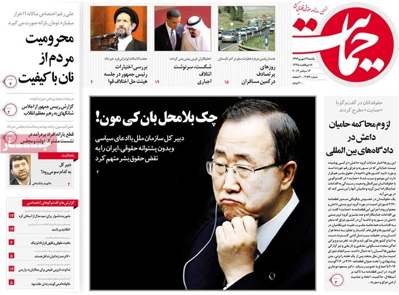 Jomhouri Islami quoted Secretary of Iran’s Supreme National Security Council Rear Admiral Ali Shamkhani as saying, “America should not violate the sovereignty of countries under the pretext of the war against terrorism.” 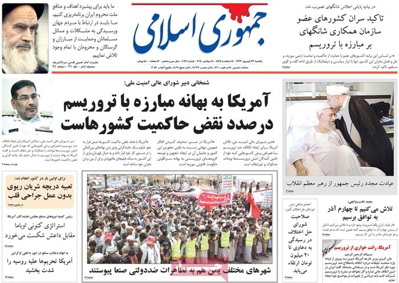 Kar va Kargar also quoted Parliament Speaker Ali Larijani as saying, “A US-led attack on Syria will fan the flames of war in the region.” 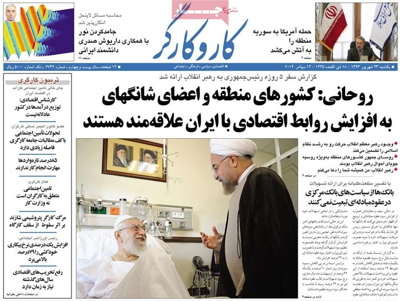 Kayhan covered a story about the latest developments in Yemen and said that the country is entering a new phase in its history. “Despite bloody crackdowns, millions of people took part in a funeral for martyrs in Sana’a.”

Kayhan: “Will radicals re-invade universities?” is the headline the daily has used to take a swipe at reinstatement of former “trouble-making” officials at the University Jihad in Mashhad.

Kayhan: The recent change of heart by the statesmen of President Rouhani’s government of Prudence and Hope which has been manifested by conclusion of deals with Russia and China has taken the West by surprise. 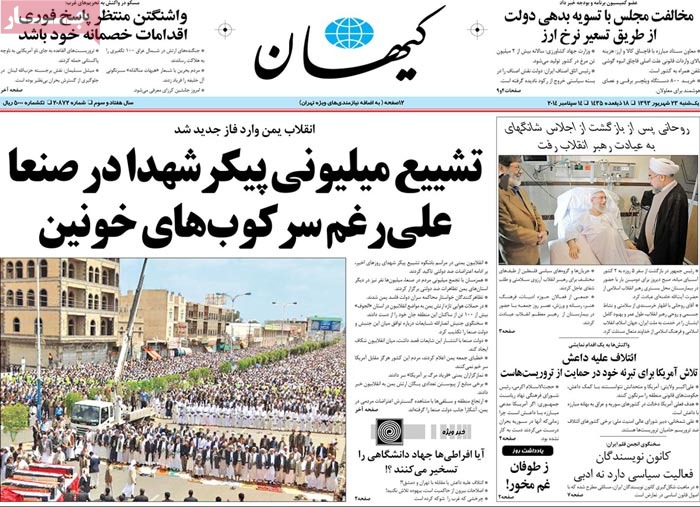 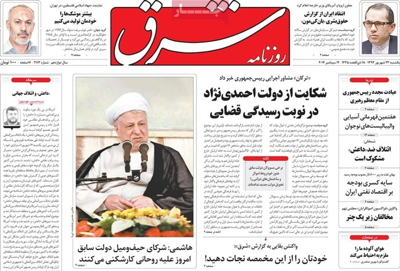