A look at Iranian newspaper front pages on Nov. 20

Introduction of Mohammad Farhadi, a one-time health minister, by President Hassan Rouhani as his pick for science minister dominated the front pages of Iranian dailies on Thursday. A last round of talks in Vienna between Iran and major powers to clinch a nuclear deal ahead of the November 24 deadline also generated headlines. And news about the passing of Gholamhossein Mazloumi, a great soccer player in the late 1970s and early 80s, appeared on the front pages of most newspapers, too.

Afarinesh: Judiciary Chief Ayatollah Sadegh Amoli Larijani has voiced opposition to calls to give more powers to the justice minister. 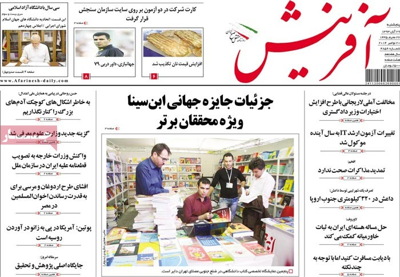 Arman-e Emrooz: Mohammad Farhadi, a health minister in the reformist government [of President Khatami] has been named by President Rouhani to take over the Ministry of Science, Research and Technology, pending parliamentary confirmation. 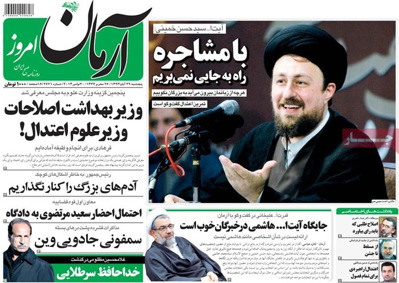 Asr-e Eghtesad: The health minister has rejected reports that a “cancer tsunami” is sweeping the nation.

Asr-e Eghtesad: The Tales by [Iran’s] Rakhshan Bani-Etemad has been named as the best film at [the 20th] Kolkata International Film Festival. 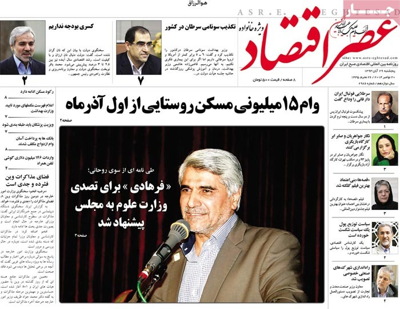 Asrar: [Following a hike in air pollution levels in the capital] Masoumeh Ebtekar, the director of the Environment Protection Organization, and Mohammad Bagher Ghalibaf, Tehran’s mayor, have been summoned to parliament for a review of measures to push down pollution levels.

Asrar: “In the absence of excessive demands, a deal [with P5+1] is within reach,” said President Hassan Rouhani. 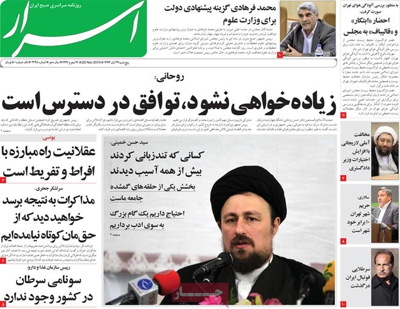 Emtiaz: Seyyed Hassan Khomeini, the grandson of the architect of the Islamic Republic, has taken a swipe at firebrands [in a speech at a National Conference on Moderation]. 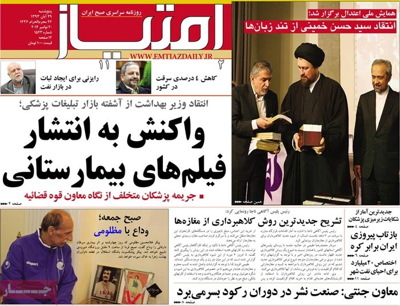 Etemad: Iranian soccer player Gholamhossein Mazloumi, who was widely known for his superb headers, has passed away at the age of 64. 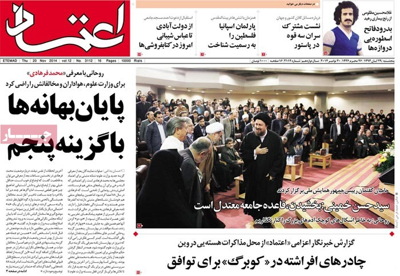 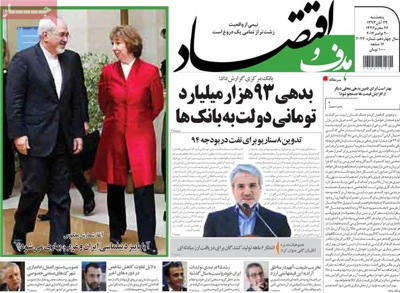 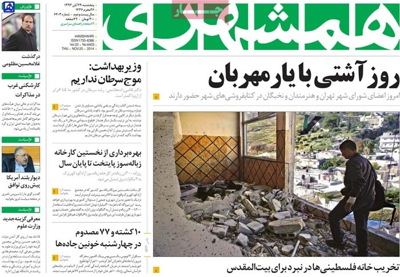 Hemayat: “Nuclear talks should lead to the removal of sanctions and no new sanctions should be imposed [on Iran]” said the Iranian Judiciary chief. 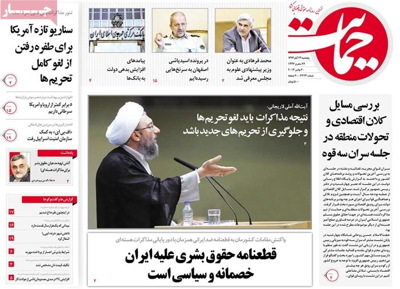 Iran Daily: All-out efforts to clinch a [nuclear] deal before the deadline. 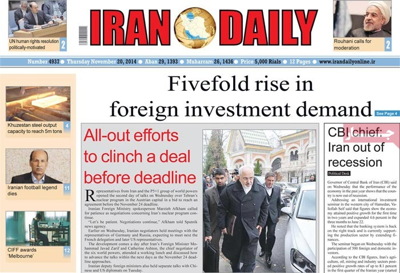 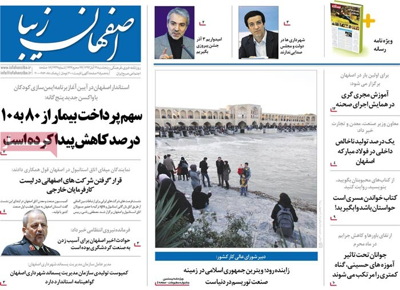 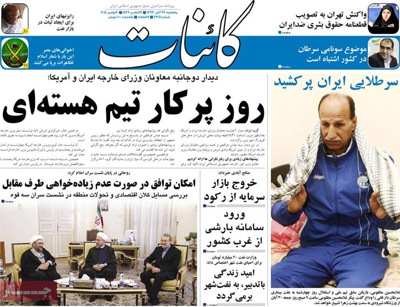 Kasbokar: “We are ready for any outcome,” said Government Spokesman Mohammad Bagher Nobakht of nuclear talks underway in Vienna. 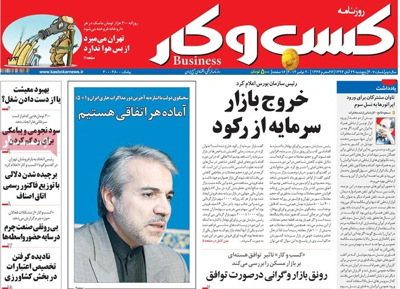 Kayhan: The health minister said, “Equipment that jams satellite signals does not cause cancer.” 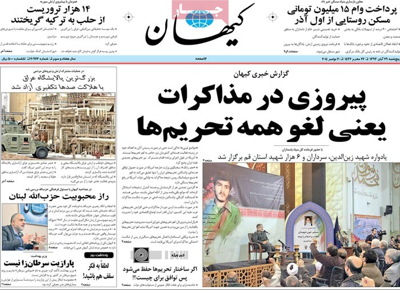 Khorasan: National economy, regional developments and nuclear talks took center stage at a meeting of the heads of the three branches of government. 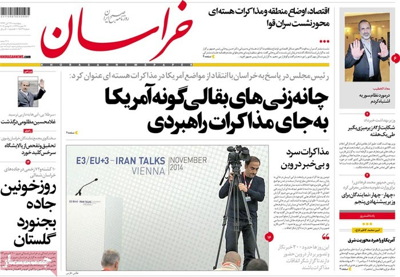 Mardomsalari: “Dialogue amounts to a practice in moderation,” said Seyyed Hassan Khomeini, the grandson of the late Imam Khomeini at a National Conference on Moderation in Tehran. 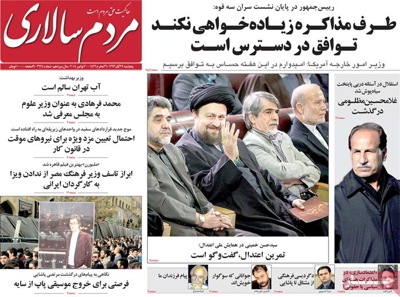 Qods: Health Minister Seyyed Hassan Hashemi has suggested that a law be drafted to deal with those who release unlawfully recorded videos of hospital procedures such as surgery. 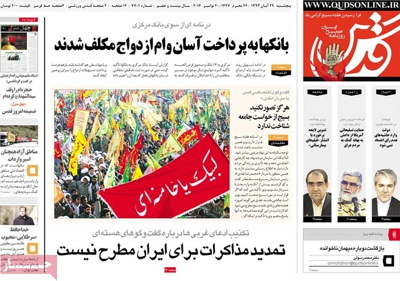 Taadol: “Investment has posted growth for the first time in two years,” said the deputy-governor of the Central Bank of Iran. 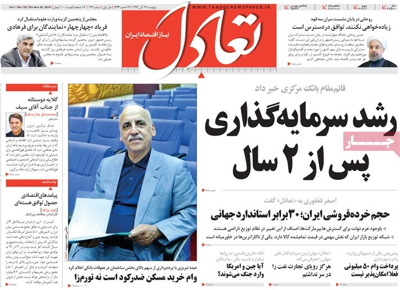