A look at Iranian newspaper front pages on March 8

IFP has taken a look at the front pages of newspapers on Sunday,March 8, 2015, and picked headlines from 16 of them. IFP has simply translated the headlines and does not vouch for their accuracy.

The report that the Expediency Council has started to draft the 6th Development Plan dominated the front pages of Iranian dailies on Sunday. Also on the covers of newspapers were the meeting between the visiting Jordanian foreign minister and President Rouhani and reports that France is erecting new hurdles in the way of a deal between Iran and P5+1.

Abrar: UNESCO has denounced as war crimes the destruction of ancient heritage in Nimrud by IS terrorists. 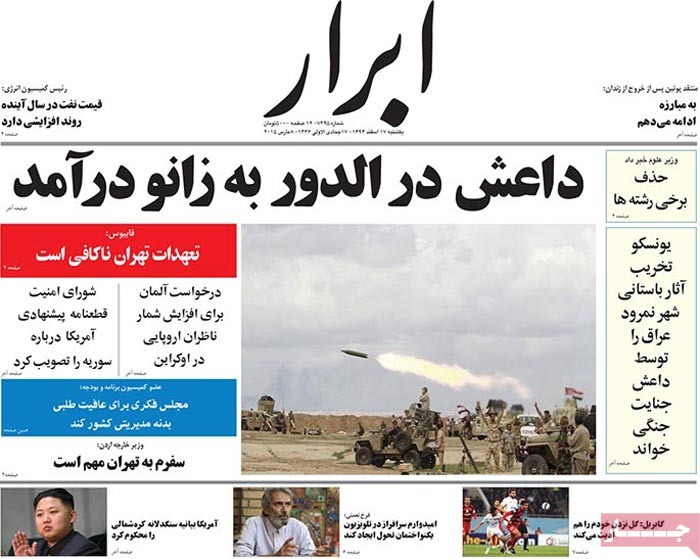 Afarinesh: Countdown is on for the complete defeat of IS in Saladin Province in Iraq. 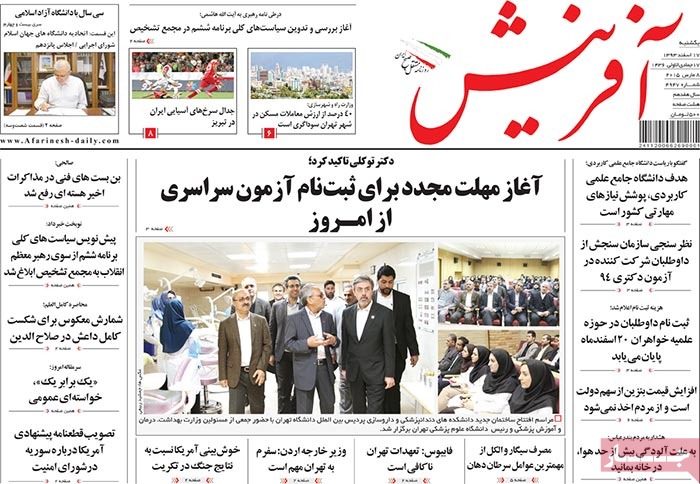 Aftab-e Yazd: Plans to offer free opiate to drug users will be examined [in parliament]. 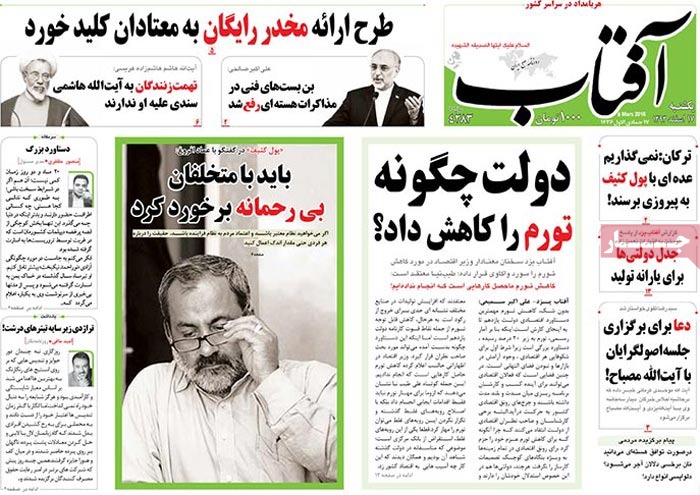 Arman-e Emrooz: The Jordanian foreign minister is in Iran on a strategic visit.

Nasser Judeh has called for talks between Iran and the Arab League. 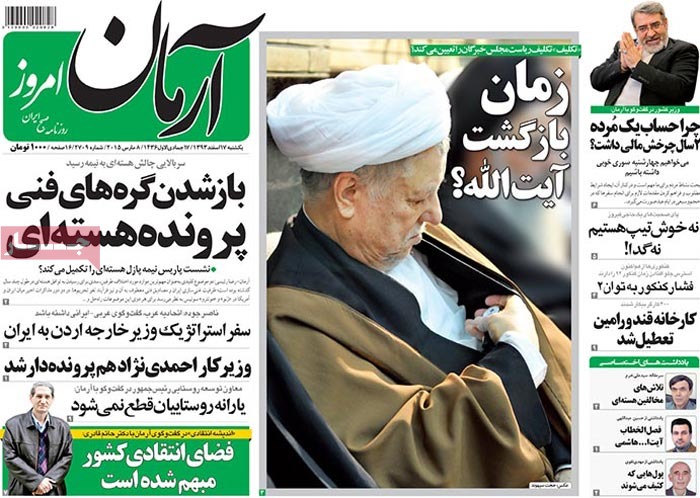 Asrar: A planned 5 percent increase in fuel prices next year has been scrapped. 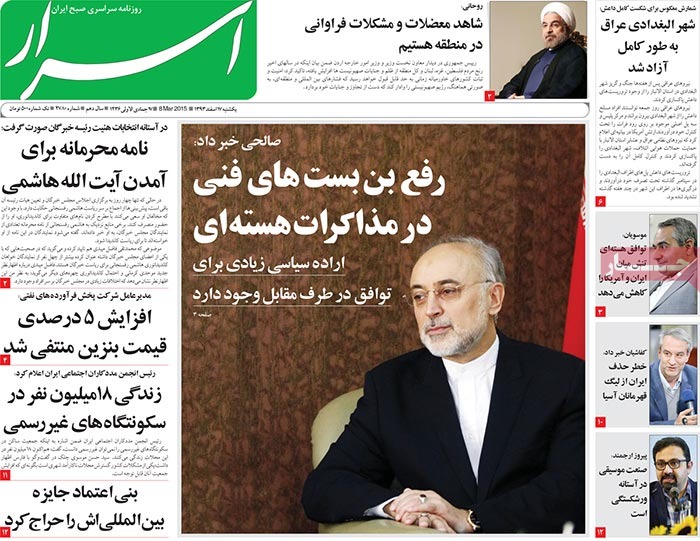 Ebtekar: France is throwing a wrench into the works despite agreement over technical issues.

The French foreign minister has described Iran’s commitments as insufficient and called for a review of the talks. 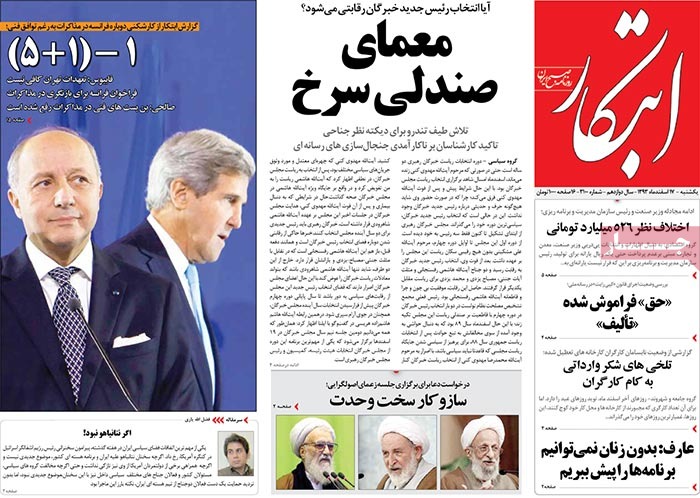 Eghtesad-e Pooya: “The Supreme Leader has sent a draft of the general policies of the 6th Development Plan to the Expediency Council,” said the government spokesman. 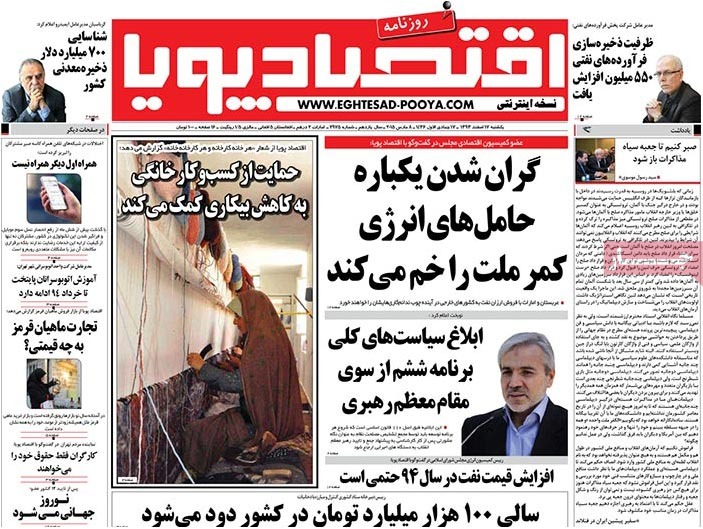 Emtiaz: The minister of culture and Islamic guidance has said that Fajr Clothing and Fashion Festival has made remarkable progress. 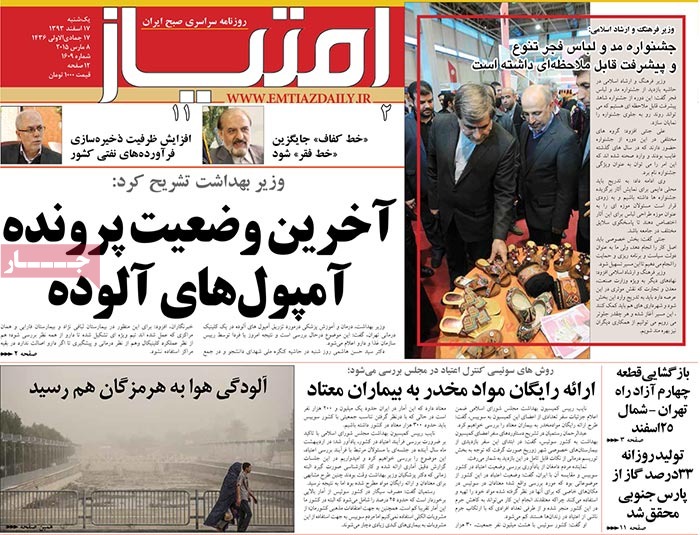 The president further said that regional and international pressures should be brought to bear to compel the Zionist regime to stop committing crimes.

“The only thing the Islamic Republic of Iran seeks is to cement regional security, stability and development,” the president added.

Ettela’at: “Transparency and competitiveness hold the key to curing the country’s economic ills,” said the president’s chief of staff.

Ettela’at: Each year some $5 billion worth of fuel is smuggled out of the country. 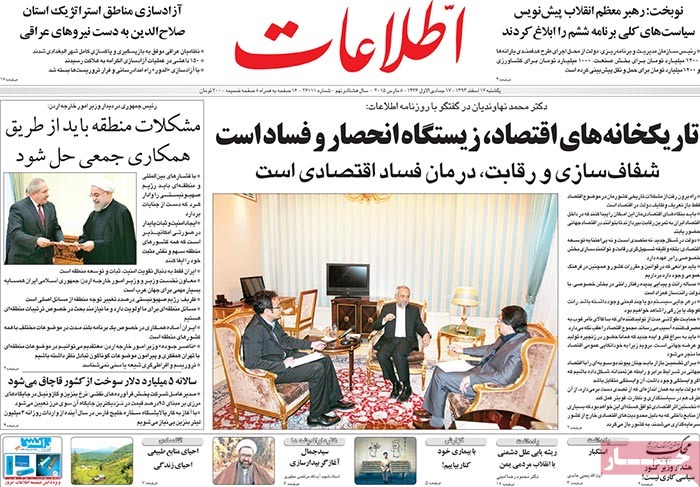 Hemayat: “Iran has the safest skies in the Middle East,” said the commander of Khatam al-Anbia Air Defense Base. 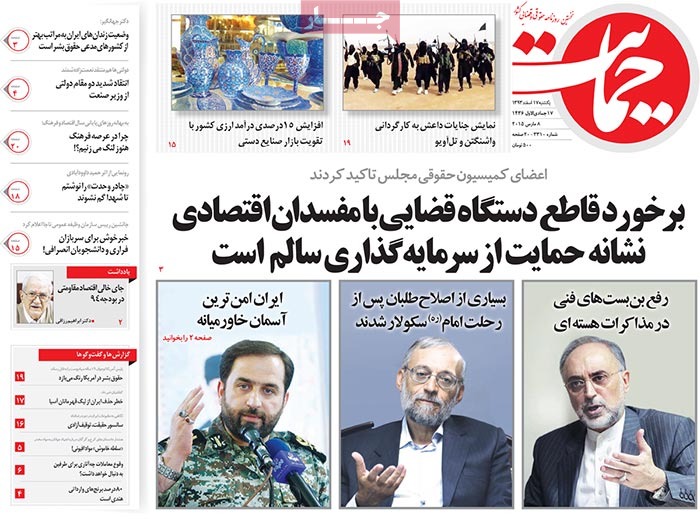 Jomhouri Islami: One hundred Islamic thinkers have protested against Saudi Arabia’s support for terrorism and the animosity of Al Saud family toward faith. 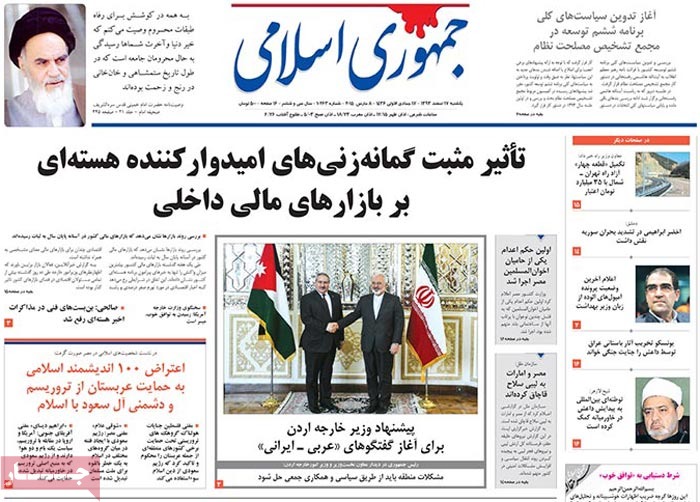 Kaenat: Reports that Iranian nationals based in the UAE are being deported have been denied. 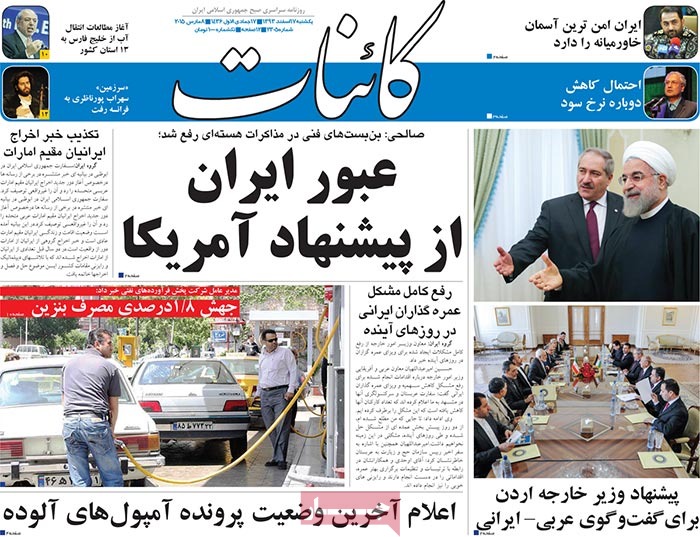 Kayhan: The President has named the presidents of eight universities across the country.

Kayhan: Israeli and American military advisors have been taken captive in a raid on an IS command center by the Iraqi army. 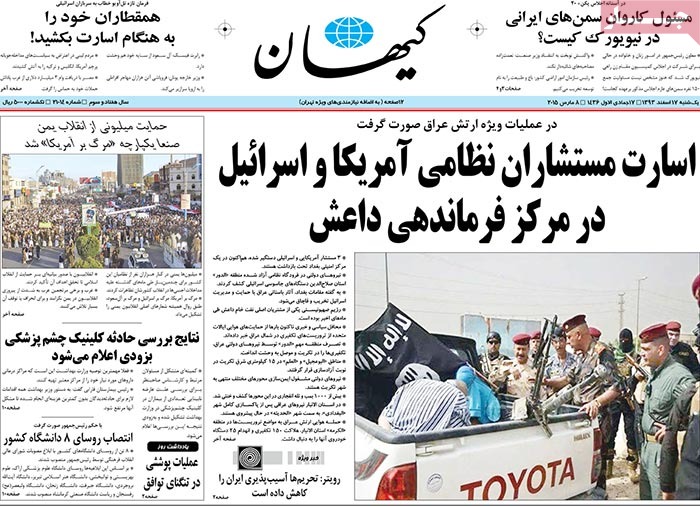 Qods: A second presence of an Iranian squadron in the Strait of Malacca. 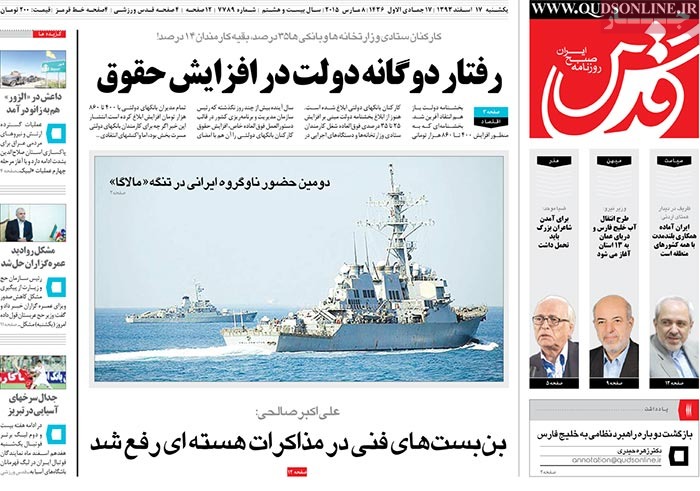 Sayeh: More than $33 billion is spent on cigarettes in the country each year. 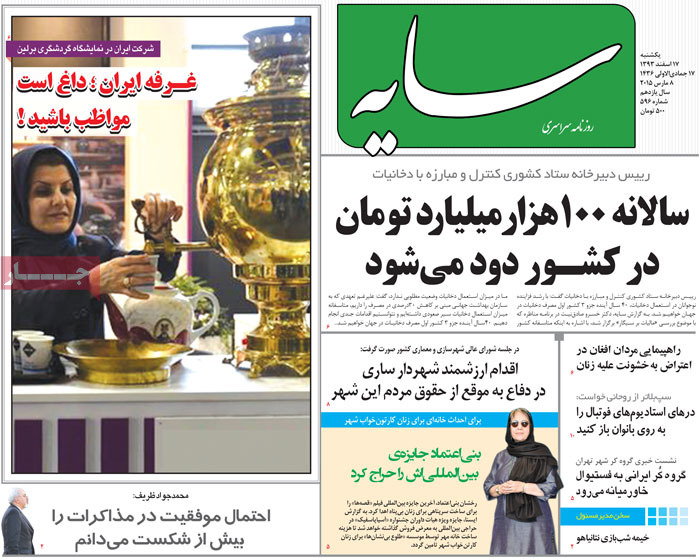 Shahrvand: More than 91,000 residents have suffered injuries in street brawls and road rage violence in the capital.

Shahrvand: A school guardian has returned a briefcase containing some $500,000 in cash and check to its owner. 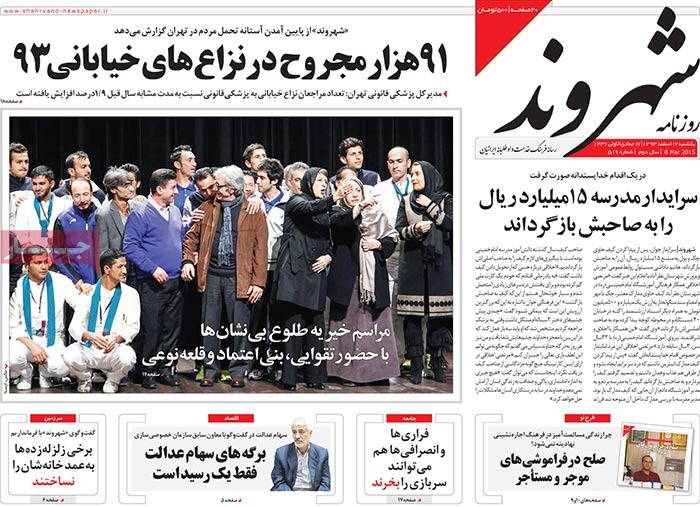