A look at Iranian newspaper front pages on March 11

The election of Ayatollah Mohammad Yazdi as chairman of the Assembly of Experts dominated the front pages of Iranian dailies on Wednesday. Prediction by the government spokesman that the country’s economy will grow 2.5 percent next year was also in the news. Remarks by the foreign minister in a session of the Assembly of Experts on nuclear talks came under the spotlight too.

Abrar: As many as 155 Iranian MPs are working in sport federations.

[The minister of sports and youth made the remark, taking a swipe at members of parliament who are engaged in sporting activities.] 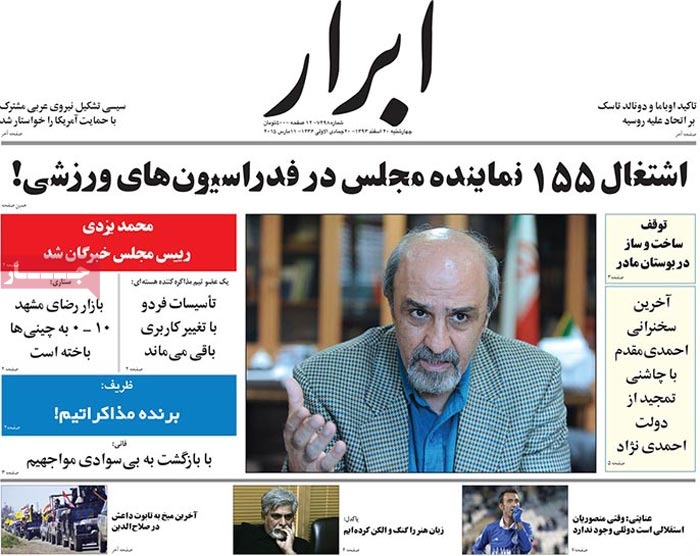 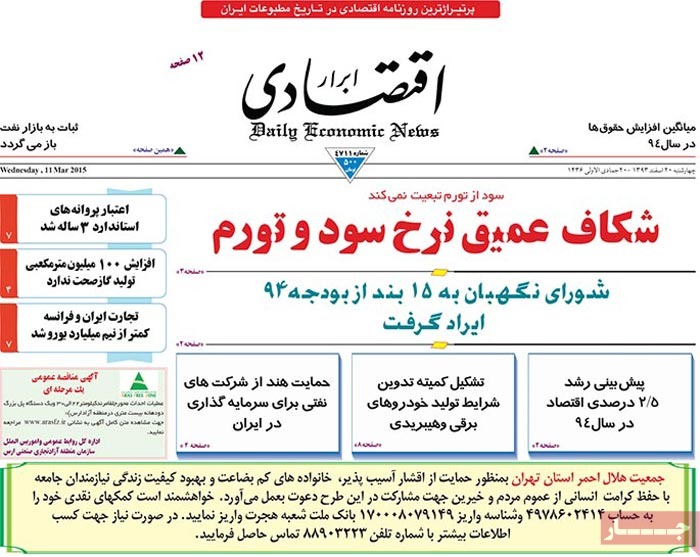 Afarinesh: Ayatollah Mohammad Yazdi was elected Chairman of the Expediency Council for one year. 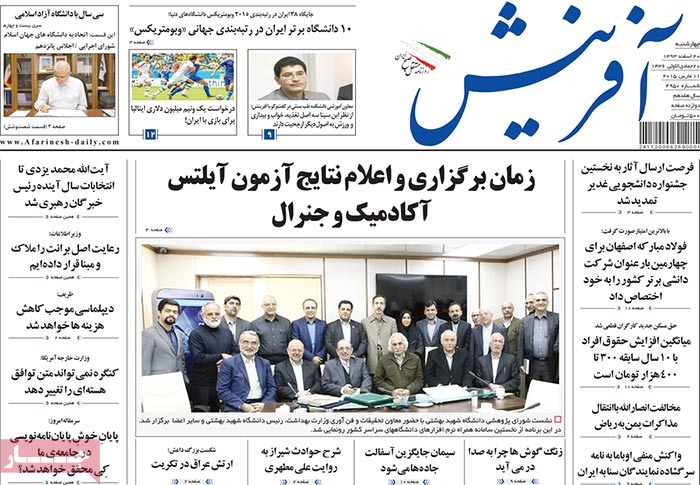 Aftab-e Yazd: “We should respect government officials. They are going through tough times,” said the president of Islamic Republic of Iran Broadcasting. 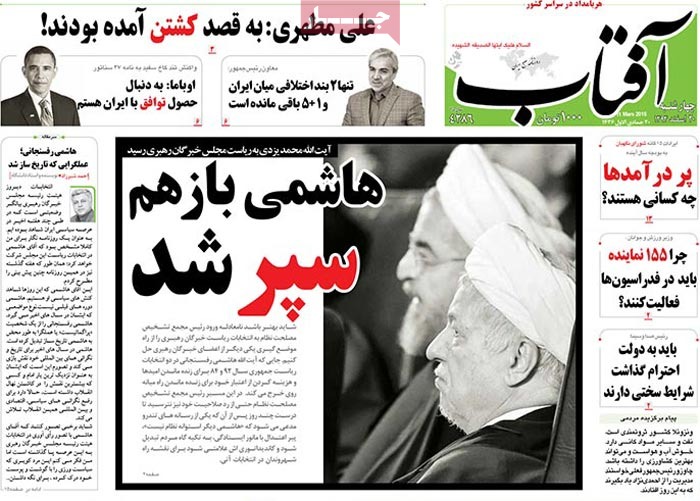 Iranian president’s special envoy to Russia, Ali Akbar Velayati, made the remark about his meeting with President Putin. 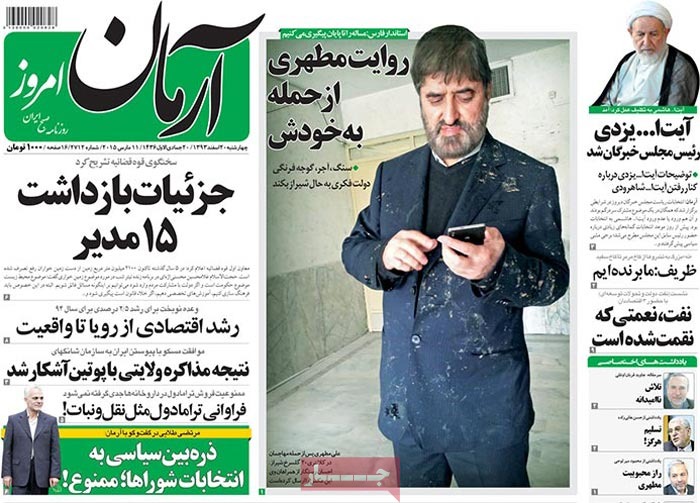 Asr-e Iranian: “We have failed in fixing the interest rates,” said Valiollah Seif, the governor of the Central Bank of Iran. 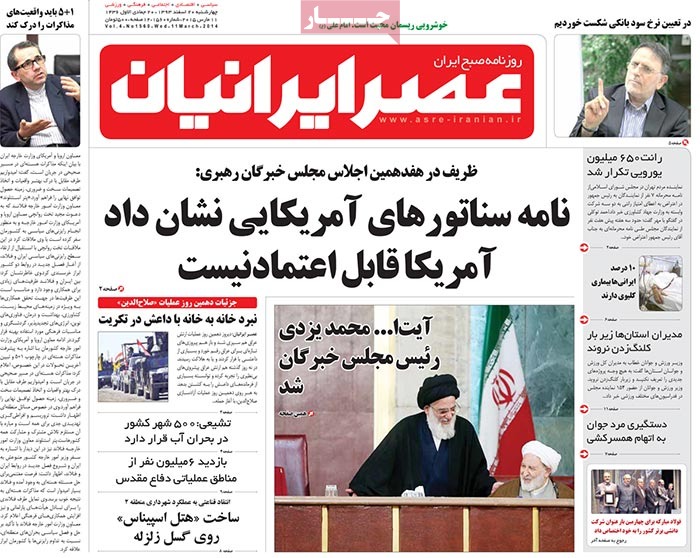 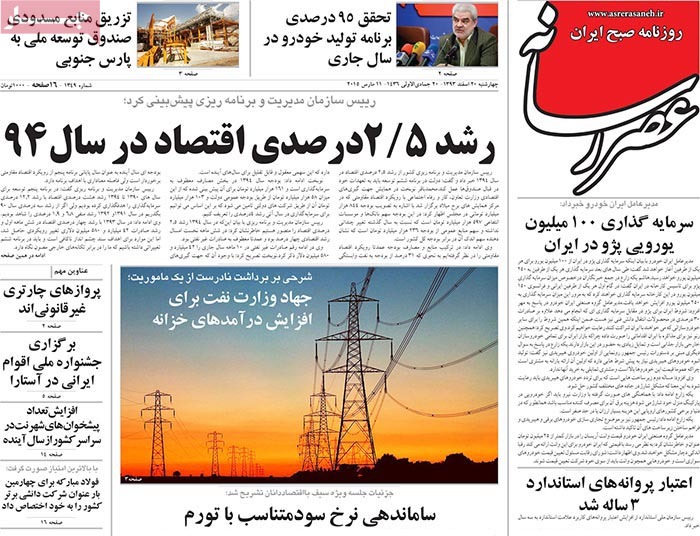 Asrar: “Apparently they wanted to kill or amputate me,” said Ali Motahari, a Tehran MP, about unknown assailants who recently targeted him in Shiraz. 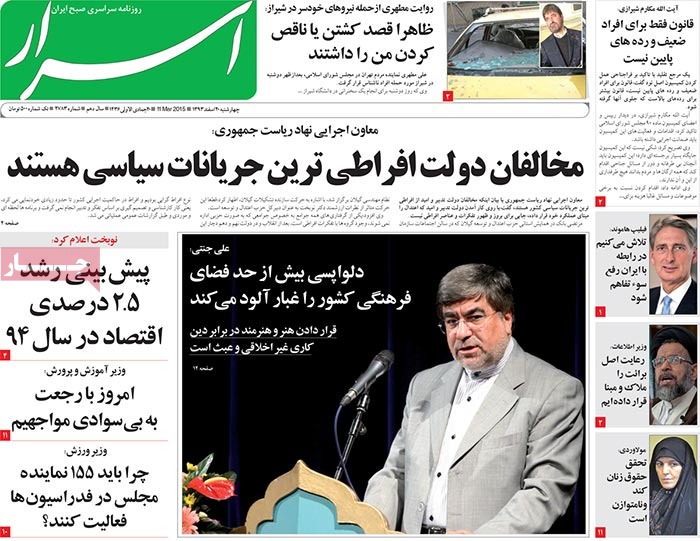 Emtiaz: “High-income families will stop to get monthly cash subsidies,” said the deputy minister of cooperatives, labor and social welfare. 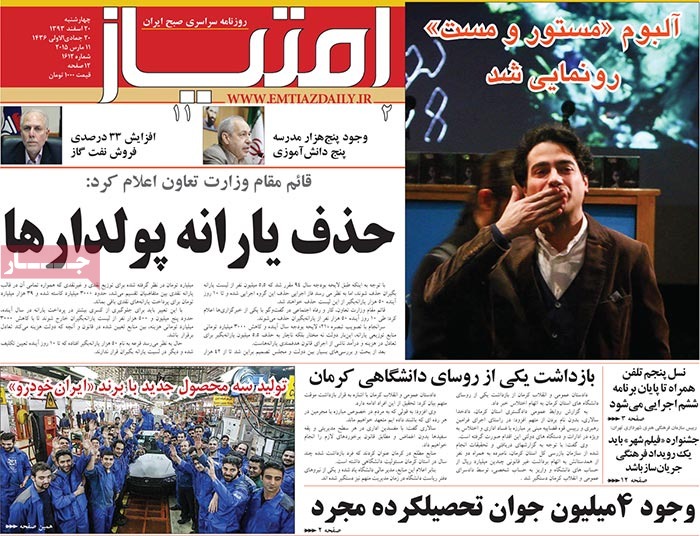 Etemad: “Contaminated ampoules were withdrawn from the market,” said the health minister, adding that 15 people lost their vision as a result of taking the fake eye drug. 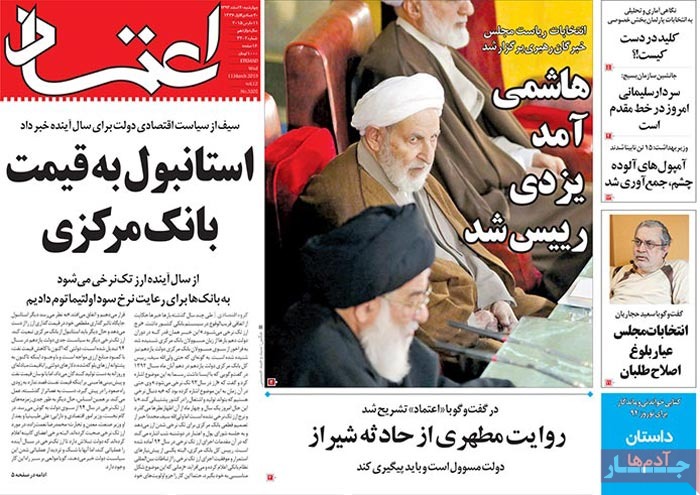 Foreign Minister Mohammad Javad Zarif made the remark in the opening session of the Assembly of Experts.

Ettela’at: President Obama has strongly slammed Republicans for their letter to Iranian officials. 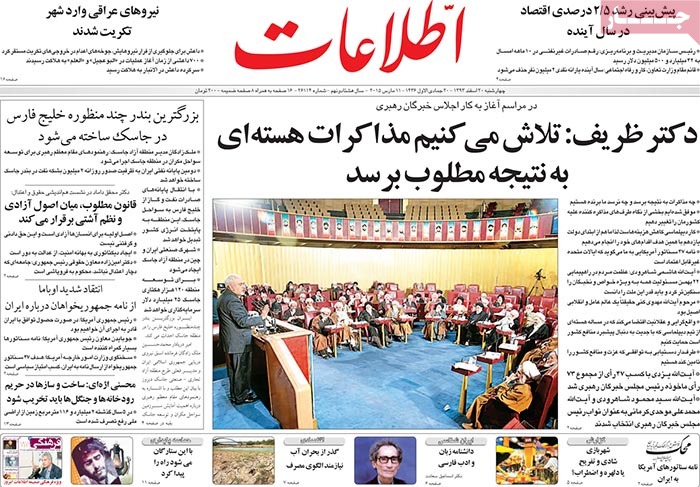 Hambastegi: “Expansion of ties with regional countries is one of the top priorities of Iran’s foreign policy,” said President Rouhani before leaving for Turkmenistan. 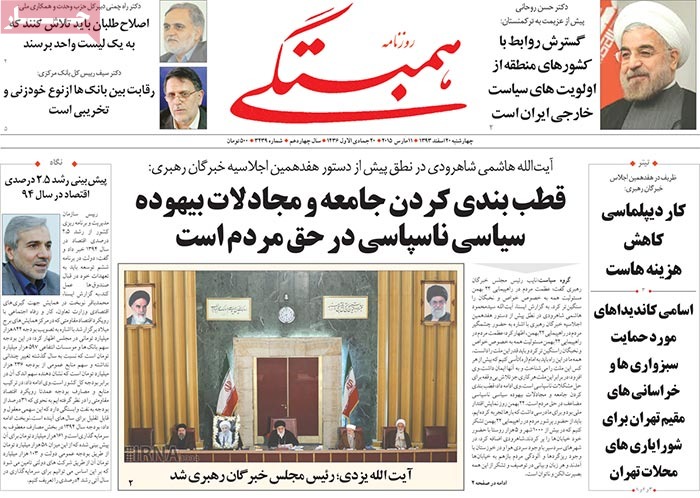 Honarmand: “Mastoor-o Mast links the East and the West,” said Homayoon Shajarian about his new album. Iran: Some 63.6 percent of Iranians are optimistic about the government performance.

This is the result of a poll conducted in four stages in 30 provincial capitals. 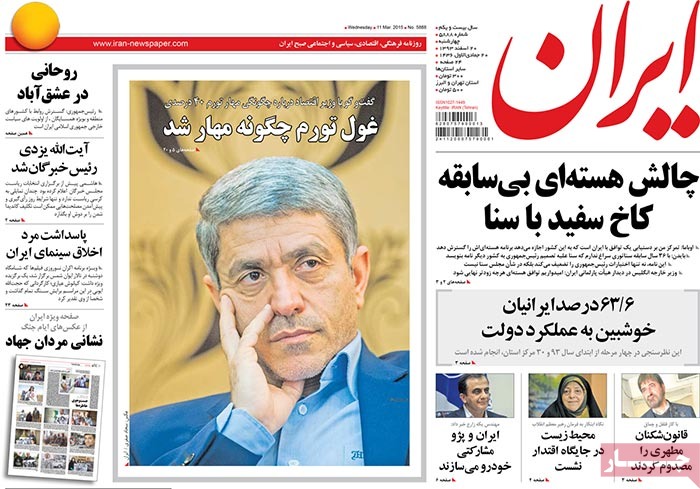 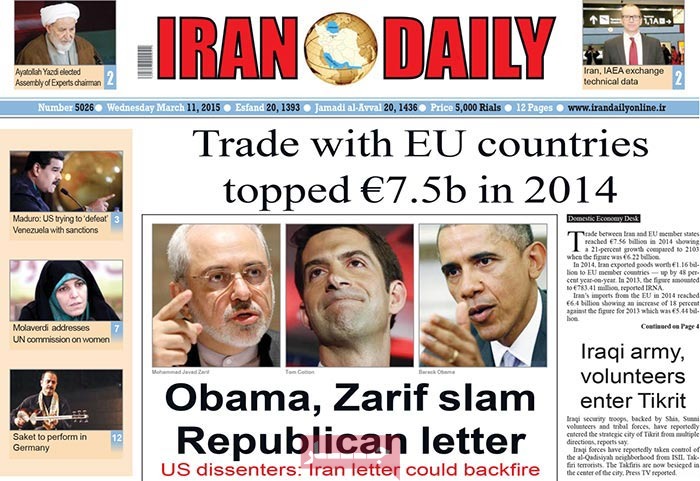 Jomhouri Islami: The European Commission’s news website has announced that the value of trade between Europe and Iran has increased 21 percent. 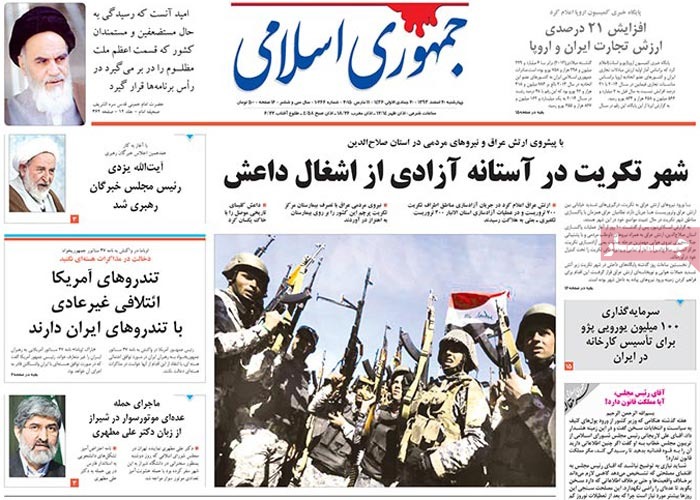 Kaenat: The budget bill was returned to parliament; the Guardian Council has found fault with [an article that deals with ways of] identifying high-income families. 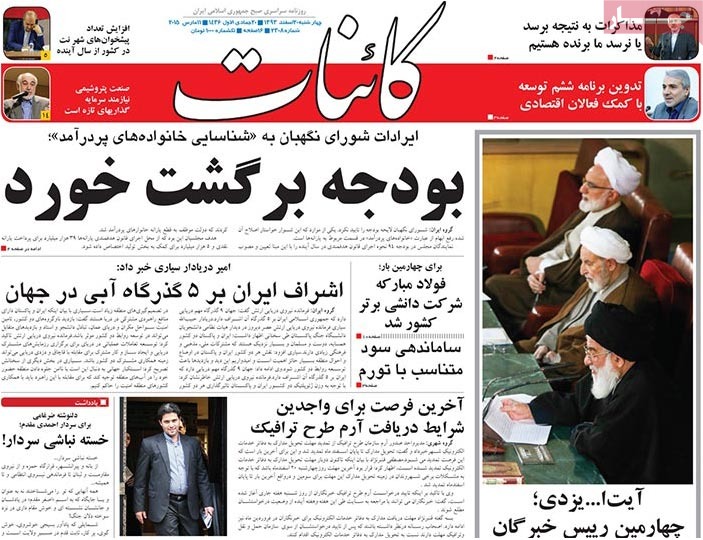 Kayhan: “If our proposal is rejected, Greece will open Europe’s doors to terrorists,” said the Greek defense minister.

[Athens has asked Europe to find a solution to the Greek debt crisis.]

Kayhan: The Iraqi army took the breath of terrorists; Tikrit turned into the graveyard of Takfiri terrorists. 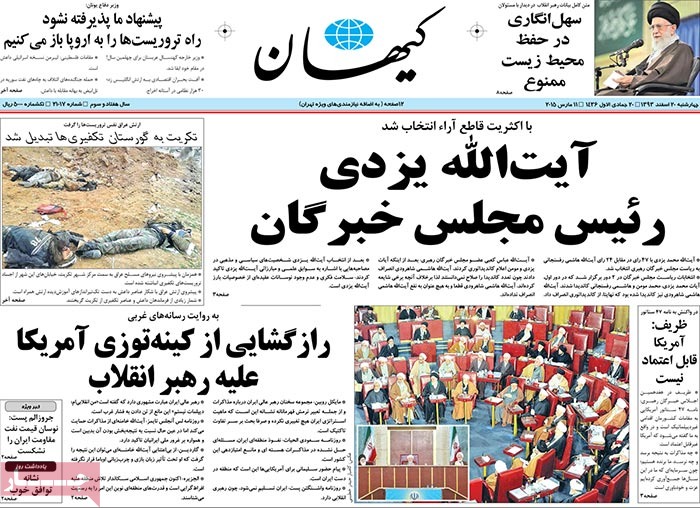 Kayhan International: Iran is fantastically rich when it comes to cultural heritage. Khorasan: “The Guardian Council has faulted a parliamentary decision which calls for the removal of the cash subsidies of high-income people,” said the chairman of parliament’s Budget Committee. 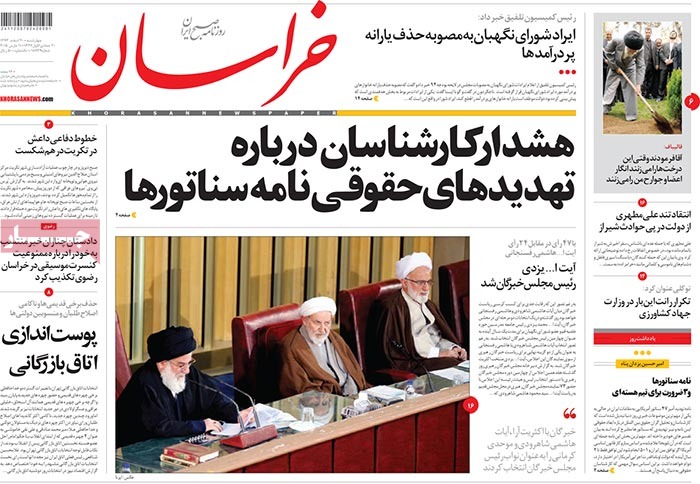 Qods: “The US showed that it is not trustworthy,” said the foreign minister in reaction to the US Senators’ letter to Iranian officials. 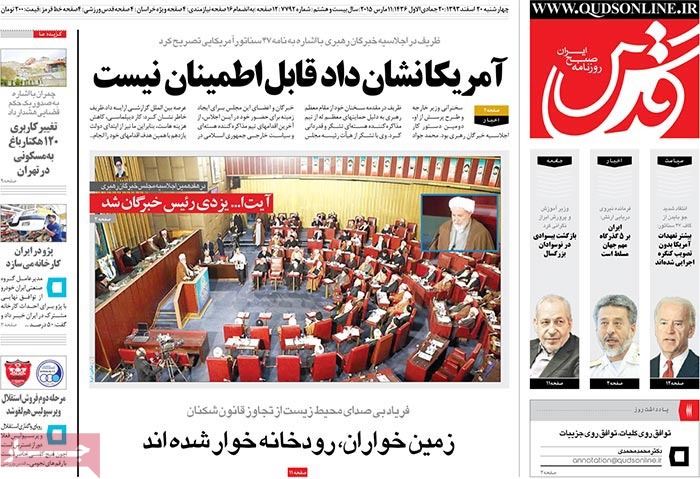 Sayeh: “The Education Ministry should sow the seeds of learning in the country,” said President Rouhani. 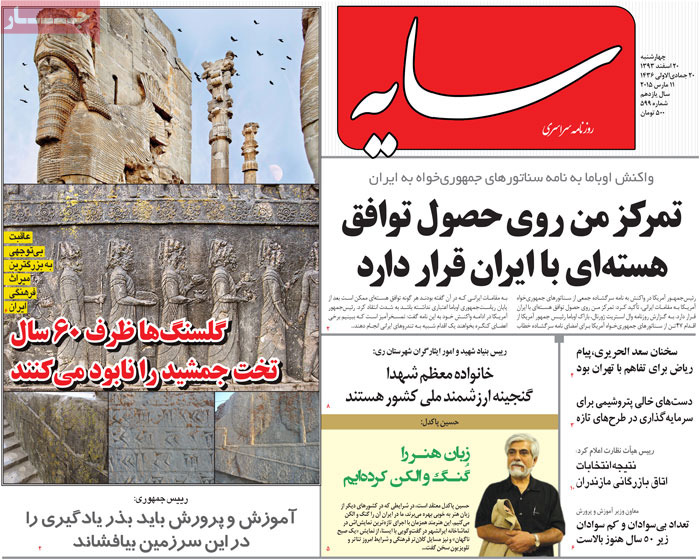 Shahrvand: A coordinated response by Tehran and Washington to 47 US Senators

Shahrvand: “We are moving back toward illiteracy,” said the education minister. 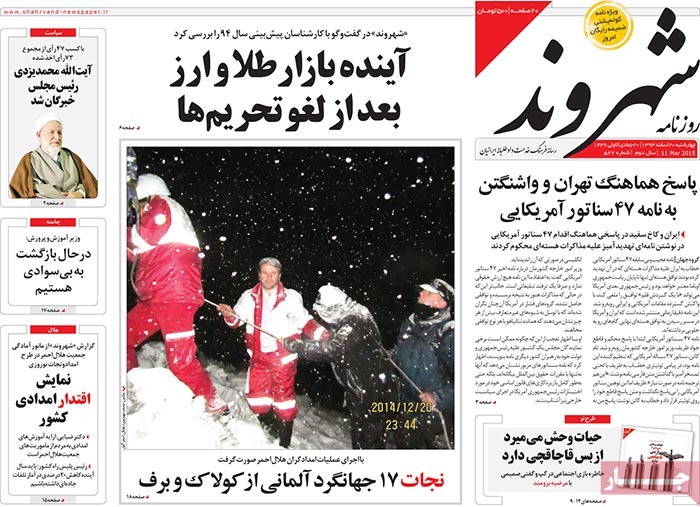 Sharq: “Common sense dictates that we should support the country’s diplomacy team [in nuclear talks with P5+1],” said Ayatollah Mahmoud Hashemi Shahroudi, a member of the Assembly of Experts.

Sharq: A former critic of Hashemi [Rafsanjani] takes the chairmanship [of the Assembly of Experts]; Ayatollah Yazdi replaced the late Ayatollah Mahdavi Kani. 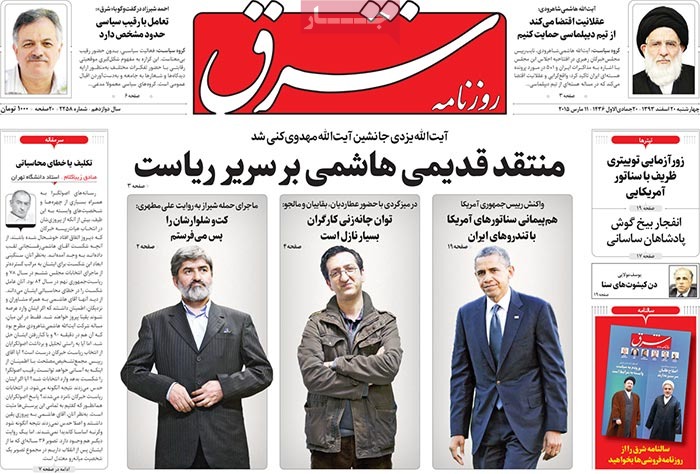 Tafahom: “Diplomacy is there to reduce costs,” said FM Zarif in the Assembly of Expert. 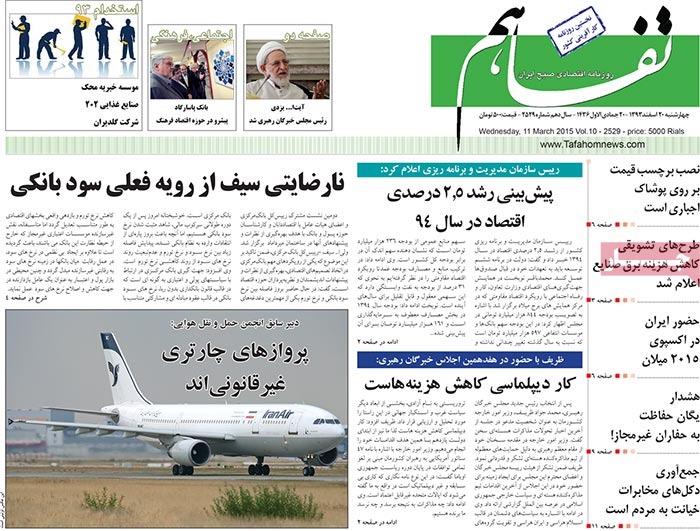 Tejarat: “We are planning to unify the foreign exchange rate next year,” the governor of the Central Bank of Iran promised. 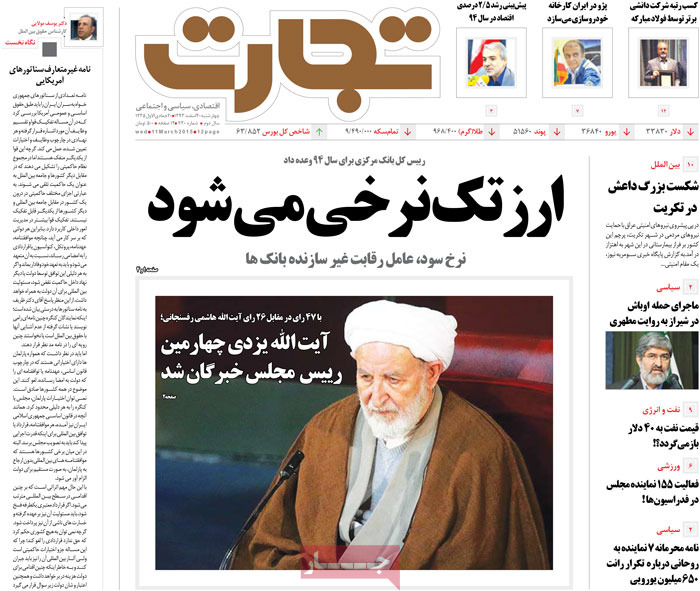