A look at Iranian newspaper front pages on Nov. 23

With a November 24 deadline for a nuclear deal approaching fast, the press coverage of ongoing talks between Iran and P5+1 in Vienna has become more extensive by the day; speculations about whether or not a final deal will be struck and analytical reports about the likely impact of different probable outcomes on the Iranian nation were splashed across the front pages of newspapers on Sunday. A decree by the Supreme Leader which allowed acting Minister of Science, Research and Technology Mohammadali Najafi to carry on running the ministry until a minister gets confirmation from parliament grabbed headlines too. News about a much-anticipated soccer derby pitting two archrivals of the capital – Esteghlal and Persepolis – against each other later Sunday was another top story of the day.

Abrar: “Parliament is likely to grant a vote of confidence to Mohammad Farhadi [President Rouhani’s fifth pick to lead the Ministry of Science, Research and Technology],” predicted Mohammad-Reza Bahonar, a principlist MP. 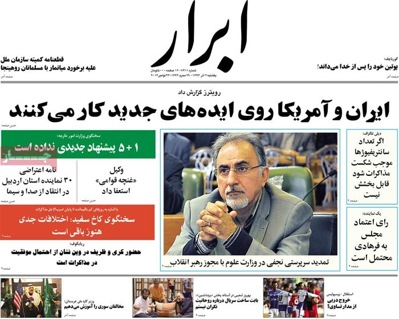 Afarinesh: “All [that was achieved in] nuclear talks over the last year was put on the line thanks to a political shift in America,” said Chief of Staff of the Iranian Armed Forces Major General Hassan Firuzabadi.

Afarinesh: “The battle against terrorism by the countries which have played a role in its emergence is not possible,” said Parliament Speaker Ali Larijani. 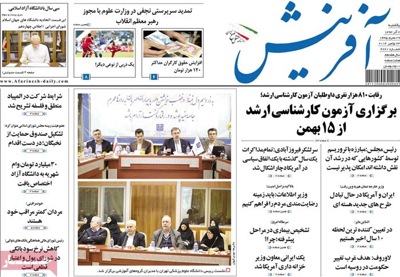 Arman-e Emrooz: “With the Supreme Leader’s go-ahead, acting Minister of Science Mohammadali Najafi has been reinstated temporarily until a minister secures a vote of confidence from parliament to take over the ministry.” 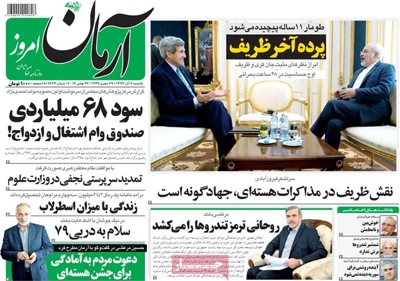 Asr-e Eghtesad has quoted the minister of industry, mines and tradeas saying that his ministry is in talks with some African countries which want to invest in Iran’s mining sector. 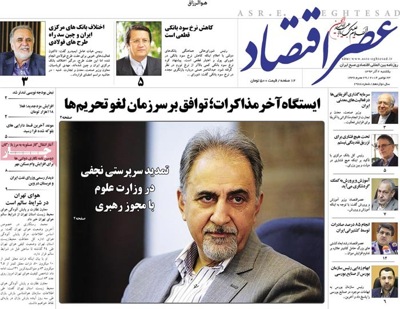 Asr-e Rasaneh: “The Money and Credit Council will definitely lower interest rates,” said the president of the Supreme Council on State-run Banks. 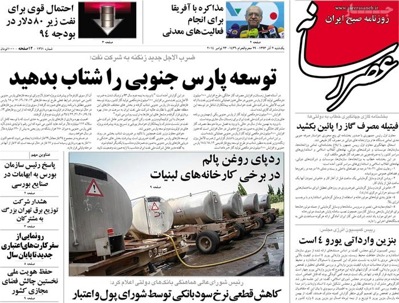 Emtiaz: “One hundred and fifteen movies will be vying for top prizes in the 33rd edition of Fajr International Film Festival in February, 2015.” 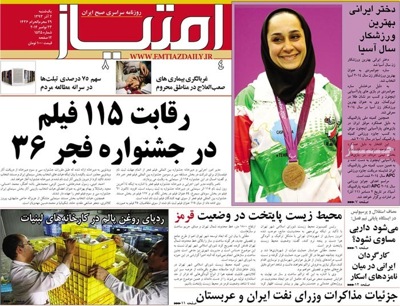 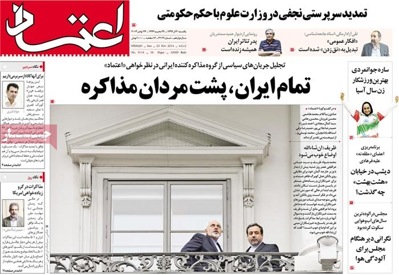 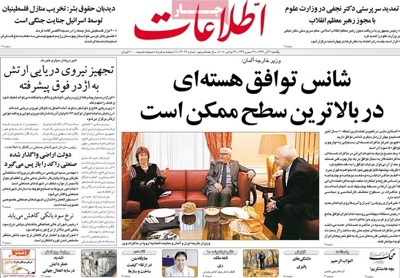 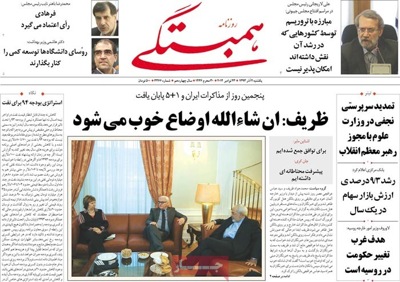 Hemayat: “The plan to grant justice minister more powers has been dismissed by the Guardian Council on the grounds that it is unconstitutional.” 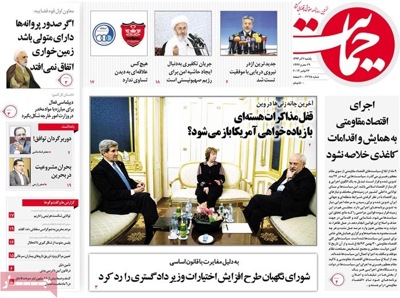 Iran: “Esteghlal and Persepolis [the most famous football clubs of the capital and long-time city rivals] will square off today. Will the spell of goalless draws be finally broken?” 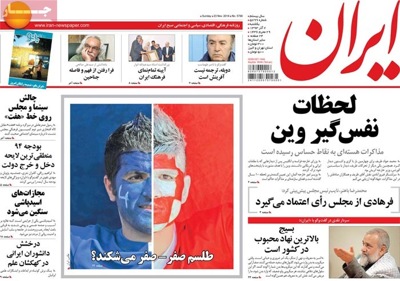 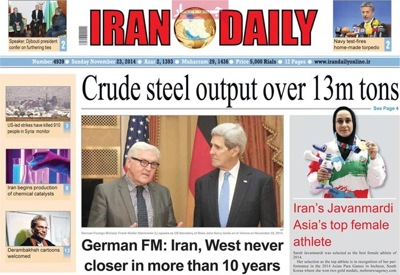 Jahan-e Sanat: “The budget plan for next year [starting March 21, 2015] has been finalized in the Planning Department of the Presidential Office to be handed to the government for confirmation.” 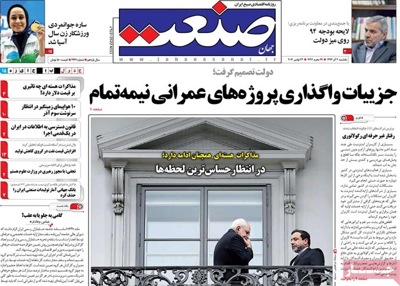 Javan: “The Iraqi army has launched a military offensive to wrest control of Ramadi [a central city] from ISIL fighters.” 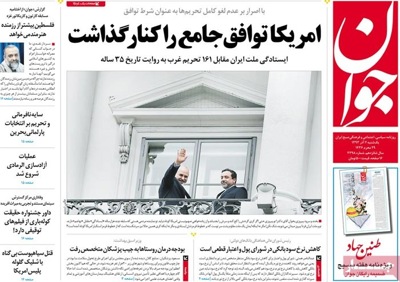 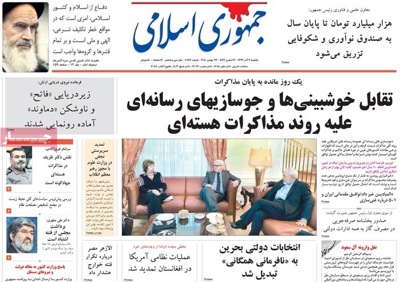 Kaenat: “The country will be blanketed in snow; more rain is on the way,” forecast Iran’s Meteorological Organization.

Kaenat: “There are footprints of palm oil in dairy plants,” warned the director of Iran’s Food and Drug Administration. 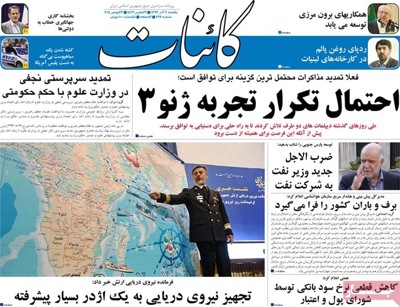 Kayhan: “The period in which doctors were so special has come to an end, their threat to leave the country is only a bluff,” said Health Minister Hassan Hashemi in response to threats by doctors who are unwilling to comply with medical tariffs to leave the county to practice medicine elsewhere.

Kayhan has put an analytical report about the latest developments of nuclear talks in Vienna under the heading of ‘America is in pursuit of both an agreement and sanctions’. 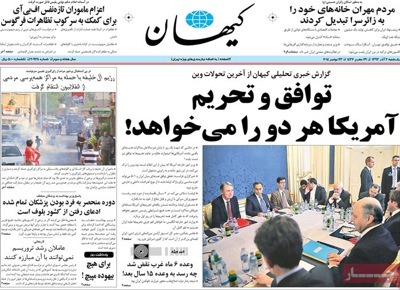 Mardomsalari: “Oil Minister Bijan Namdar Zanganeh is to have a meeting with his Saudi opposite number in the run-up to the 166th OPEC ministerial meeting scheduled to be held in Vienna on November 27.” 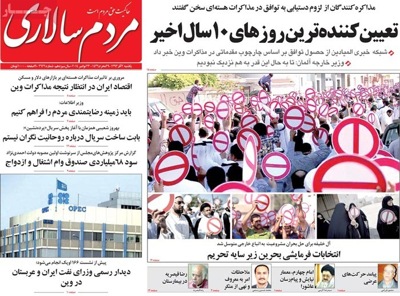 Rah-e Mardom posed a question on its front page under the headline “Is a November 24 deadline [between Iran and P5+1 to clinch a deal] a beginning or an end?” 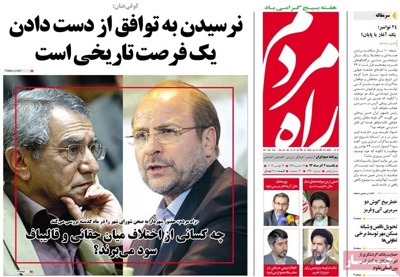 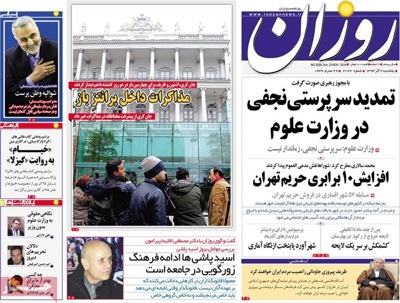 Tejarat: “Iran will find its way out of recession by March 21, 2015,” said Governor of the Central Bank of Iran Valiollah Seif. 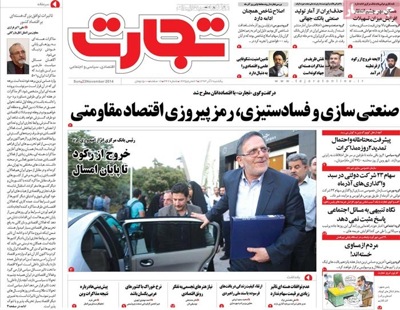