A look at newspaper headlines across the country on September 7

Most Iranian newspapers on Sunday (September 7) gave front-page coverage to President Rouhani’s visit to the northeastern province of Khorasan Razavi during which the chief executive said, “We are now out of recession.” The emergency landing on Iranian soil of a charter plane carrying American and NATO forces from Afghanistan to the UAE drew as much attention. “A NATO plane is forced to land in Iran” and “102 uninvited guests arrive at Bandar Abbas” were two of the headlines the Persian-language dailies used to cover the controversial emergency landing of the flydubai plane in the southern Iranian port city.

Ebtekar: “God willing, I will be the [President’s] choice for science minister,” acting Science Minister Mohammad Ali Najafi says in response to a question as to when the new science minister will be named by the president to secure parliamentary approval.

Ebtekar: “More than 50 MPs sign a petition to impeach the education minister.” The likely impeachment of President Rouhani’s education chief comes two weeks ahead of the reopening of schools in Iran after an almost three-month recess. 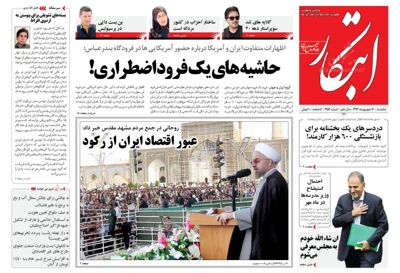 Javan: “Twenty hours of talks seem to have failed to narrow the gap” is the title the principlist newspaper has chosen to cover bilateral talks between Iran and the US ahead of negotiations in New York with P5+1 later in September. 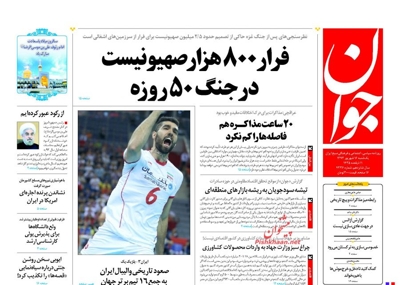 Arman-e Emrooz: “Former sportsmen who sit on Tehran City Council are nowhere close to Takhti.” That is the title of an op-ed by university professor and political analyst Sadegh Zibakalam. It refers to the election of Mehdi Chamran, an ally of former President Mahmoud Ahmadinejad, as chairman of the council by its members. Chamran replaces Ahmad Masjed Jamei, a former Cabinet minister under President Khatami and a reformist. Until a few days before the in-house vote of the council, Abbas Jadidi, Hadi Saei, and Hossein Rezazadeh, who have won an array of medals in world and Olympic events in wrestling, taekwondo, and weightlifting respectively, were in the reformist camp. But on the day of the vote they broke ranks with reformists. Zibakalam describes the last-minute change of heart as unethical and contrary to the principles of sportsman chivalry which are widely attributed to Takhti, a famed Iranian Olympic gold medalist who passed away in 1967. The analyst argues that such practices are not in line with the spirit of sportsmanship, even if these athletes identify themselves as followers of Iran’s wrestling great: Takhti.

Arman-e Emrooz: Iranian taxi drivers are to learn the ABCs of their profession in universities. 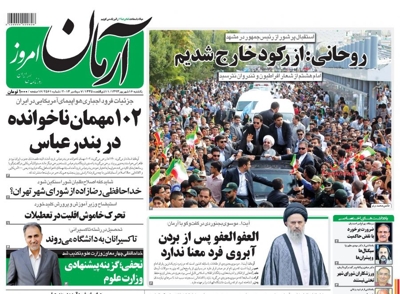 Afarinesh: “Imam Reza set an example of moderation and prudence in politics,” President Rouhani told the people of Mashhad on the birth anniversary of Imam Reza, the eighth Shiite Imam whose mausoleum is in Mashhad. Imam Reza accepted to serve as deputy of Al-Ma’mun, the ruler of his time, only to help narrow divisions in the Islamic community. 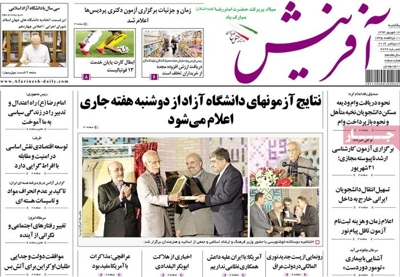 Asrar: “Ahmadinejad’s university is not qualified to admit students,” the director general of the Science Ministry’s Development Department said. 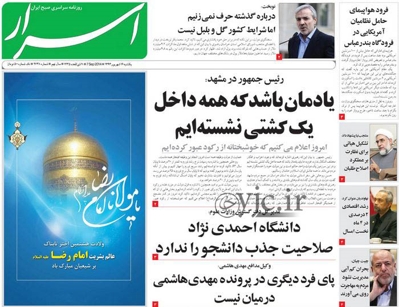 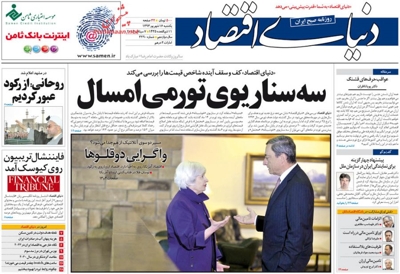 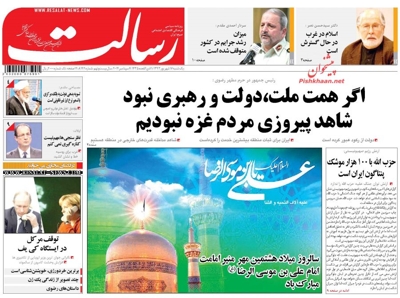 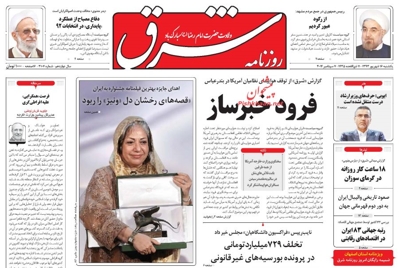 Shahrvand: “A plan to counter unregistered marriages [a reference to cohabitation] is to be presented to the Planning Council of Tehran Governor’s Office.” 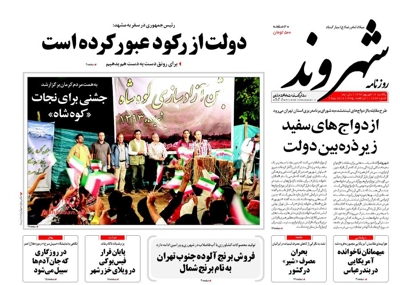 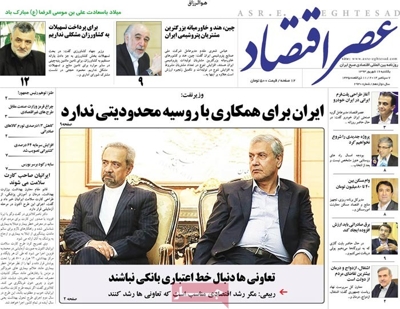 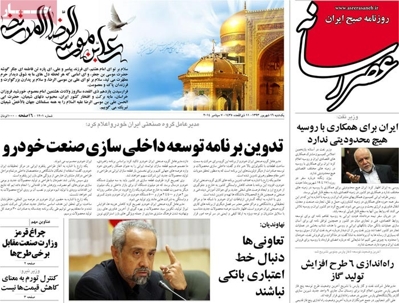 Kayhan: “The path to progress goes through unity among all institutions and strata,” President Rouhani said in Mashhad. 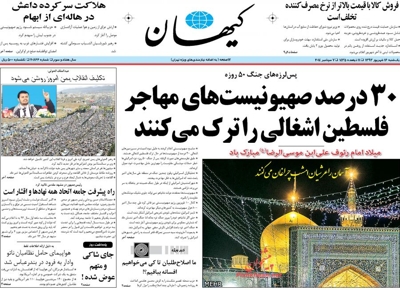 Mardom Salari: “The military-service-completion cards of 13 famous soccer players will be revoked.” 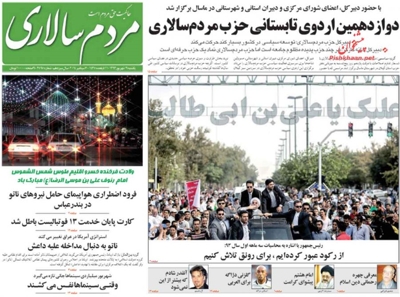 Hadaf va Eghtesad: “Economy is the first priority of the 11th government,” the interior minister said. 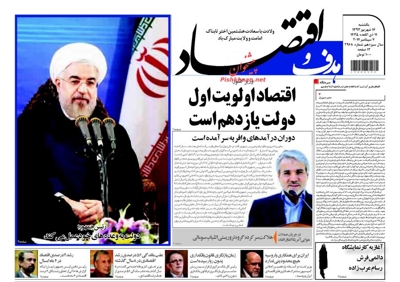 Etemad: “Iran and Turkey managed their disagreements.” That is the title the daily uses for an interview with Iran’s Ambassador to Turkey Alireza Bikdeli.

Etemad: “Ayatollah Mesbah Yazdi complains about the way principlists join hands.” Ayatollah Yazdi, a hardline member of the Islamic Revolution Stability Front, played a prominent role in helping Mahmoud Ahmadinejad rise to power in 2005. In the first two decades of the revolution, this member of the Assembly of Experts was more of a philosopher and scholar and largely stayed out of politics. In recent years he has expressed concerns about perceived deviation from the true path of the revolution and debuted on the political stage. He does not believe in democracy in the same way as reformists and moderate principlists do. He makes no secret of his lack of belief in popular vote, prompting his critics, both clergy and non-clergy, to suggest his ideals run counter to those of the architect of the Islamic Republic who famously said “Popular vote is the criterion.”

Etemad: “Iran’s national volleyball team is through to the second stage of the FIVB World Championship.”

Etemad: “The water share of farmlands to be cut in half,” said an adviser to the minister of agriculture jihad. 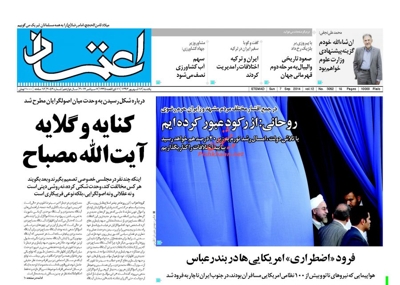 Ettela’at: “Economic development and promotion of culture and ethics are what our society needs.… By the end of the year [March 21, 2015] the oil sector will have posted 8 percent growth…. Primary steps have been taken to address environmental problems…. Had it not been for the assistance of the Iranian people and government, Iraq would not have been able to clear its towns of brutal terrorists…. Government tries to consolidate unity in society.” Those are some of the remarks the president made in a speech in Mashhad.

Ettela’at: “Those who do damage to the environment are corrupt,” said Ayatollah Mostafa Mohaghegh Damad, a philosopher and jurist who teaches law at Tehran’s Shahid Beheshti University. Dr. Mohaghegh Damad, who is also a board member of the Center for the Greater Islamic Encyclopedia, has penned a book titled “Environmental Jurisprudence”, which is meant to reconcile traditional jurisprudence with social life in the modern world. 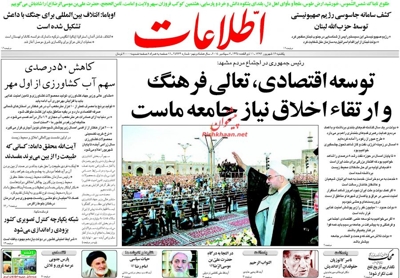 Khorasan: Iranian Foreign Ministry Spokeswoman Marziyeh Afkham, who is in Mashhad with the president, says Iranian media are largely absent on the global stage. Iran Front Page hopes to have taken the first steps toward filling that void. 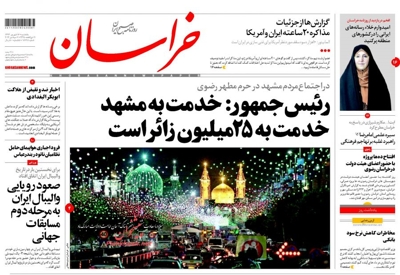