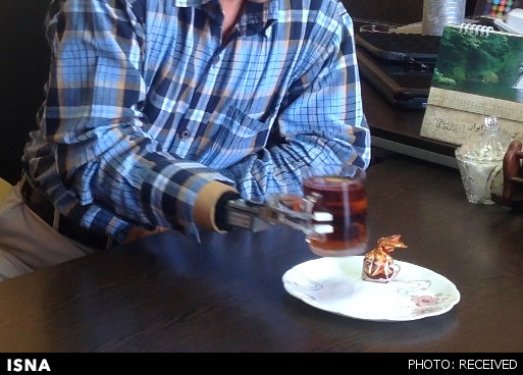 Locally-made artificial hands would cost one fourth of the German-made models on the market.

Iranian researchers have designed and built an electronic artificial hand which costs one fourth of the German model.

The artificial device is made of two motion sensors, an electronic circuit, mechanical sections and chargeable batteries, said Kavian Parvaresh, one of the researchers of the project.

The sensors would turn movements of upper arm muscles to electronic commands and transfer them to the electronic section which acts like hand fingers, he said, adding the mechanical section which plays the role of three fingers of a hand can open and close, making it possible for the disabled person to hold different objects and even write easily.

Sensitivity of prosthesis sensors of the artificial hand can be adjusted and the person can take delicate things such as a cup of tea and a pen only after 30 minutes of training.

According to the researcher, fingers of the artificial hand can take 50 50 Newton force.

The German model of the electronic artificial hand costs 7,000 euros. When mass-produced the locally-made new product would save hundreds of thousands of euros in import costs annually.

He also said that the artificial hand has not been mass produced.