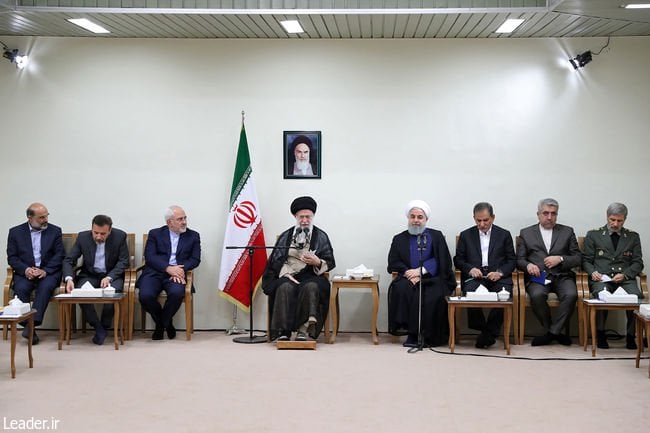 The “important” meeting was held in Tehran amid an unprecedented devaluation of Iran’s national currency.

During the talks, the Leader underlined the country’s capabilities to overcome the economic problems and said thwarting enemies’ plots at the current situation is possible through tireless works and efforts by all officials and unification and cooperation among people from all walks of life in Iran.

The Leader underlined the “urgent need for expansion of diplomacy and foreign contacts” and said except for a few countries like the US, Iran should expand its diplomatic relations with the East and West.

He then called for developing a roadmap for a stable economy and said as soon as the roadmap is developed, the nation and economic leaders will take on their assignments and provide the government with a sense of tranquility and stability to press ahead with its projects.

Strengthening the private sector and the need to seriously deal with economic corruption were among other significant guidelines given by the Iranian leader to the cabinet ministers.

Ayatollah Khamenei referred to some violations by certain individuals and organizations over the past years in gold coin and currency markets and said the government must seriously deal with the violators at any level.

Leader of Iran’s Islamic Revolution also praised the recent order by Iran’s President Hassan Rouhani to take serious action against the violators in automobile importation and said the orders should be followed up till the ideal results are achieved.

He also called for government’s full control over the foreign currencies market and its resolute fight against destructive financial activities and money laundering and said the violations should be dealt with through legal regulations.

Ayatollah Khamenei urged the officials to directly discuss the problems with the nation and provide them with clear clues to let them know about the enemies’ plots against the Islamic Republic.

“I’m completely sure that if the mentioned conditions are met, the government can overcome the current problems and foil the US plots,” he noted.

Elsewhere in his address, the leader said the European signatories to the Iran nuclear deal are obliged to give necessary guarantees to Iran under the JCPOA.

He also said showing authority in the face of enemies particularly US is necessary and this should be done resolutely and in due time.