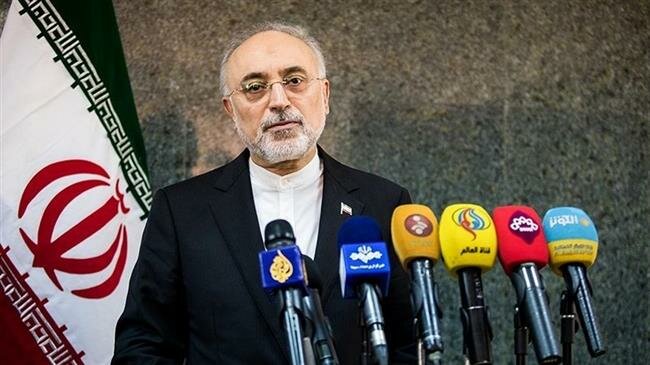 The head of the Atomic Energy Organization of Iran (AEOI) Ali Akbar Salehi says the Islamic Republic is dynamically advancing its civilian nuclear program, stating that it has recently launched a plant that can manufacture dozens of advanced centrifuges on a daily basis.

On a visit to an under-construction national ion therapy center in the city of Karaj on Tuesday, Salehi said his agency has lately inaugurated a modern hall, which has the capability to produce 60 state-of-the-art centrifuges per day.

He further noted that Iran has already installed advanced IR-6 centrifuges regardless of certain states’ protest, and is currently testing a newer generation of centrifuges dubbed IR-8.

The Iranian nuclear chief hoped that the country’s ion therapy center, with an estimated construction cost of 200 million euros, would be completed and fully come on stream within the next five years.

Salehi underlined that the work on building two 1,000-megawatt nuclear power plants, which started two years ago with an estimated cost of $10 billion, will continue.

He pointed out that said Iran has never halted its peaceful nuclear program and will never do so.

“I would like to explicitly tell the people that we will continue our movement towards fulfilling our nuclear objectives and we have never stopped and will never stop in the future,” Salehi noted.

He said the AEOI used to produce 10 tons of uranium for years, while the volume stood at 30 tons last year.

Salehi emphasized that production of uranium may increase to 50 tons if the current trend continues.

Speaking in an interview with the German daily Süddeutsche Zeitung on Monday, Foreign Minister Mohammad Javad Zarif said Iran will take the “third step” in reducing its commitments under a 2015 multilateral nuclear deal unless the other signatories take action to protect the agreement.

The third step will be taken on September 6, Zarif said, adding that if Tehran comes to an agreement with Europe and the European side begins to implement it, it will not take such a measure.

The top Iranian diplomat lashed out at the US for unilaterally leaving the nuclear deal, officially called the Joint Comprehensive Plan of Action (JCPOA), and pushing the European signatories to follow suit.

The Americans, he said, need to stop preventing others from fulfilling their obligations or pushing them into breaching the JCPOA.

Tehran has rowed back on its nuclear commitments twice in compliance with articles 26 and 36 of the 2015 deal.

Iran says its reciprocal measures will be reversible as soon as Europe finds practical ways to shield the Iranian economy from unilateral US sanctions which were imposed last year when President Donald Trump withdrew from the 2015 nuclear deal.

The European signatories to the JCPOA have so far failed to uphold their commitments. They have expressed vocal support for the deal, but failed to provide meaningful economic incentives as required under the nuclear agreement.

The Europeans have already missed a 60-deadline set by Tehran, prompting Iran to go for the second phase of cutting its commitments on July 7, which marked the start of a second such deadline for them.

As a first step Iran increased its enriched uranium stockpile to beyond the 300 kilograms set by the JCPOA.

In the second step, Tehran began enriching uranium to purity rates beyond the JCPOA-limit of 3.76 percent.