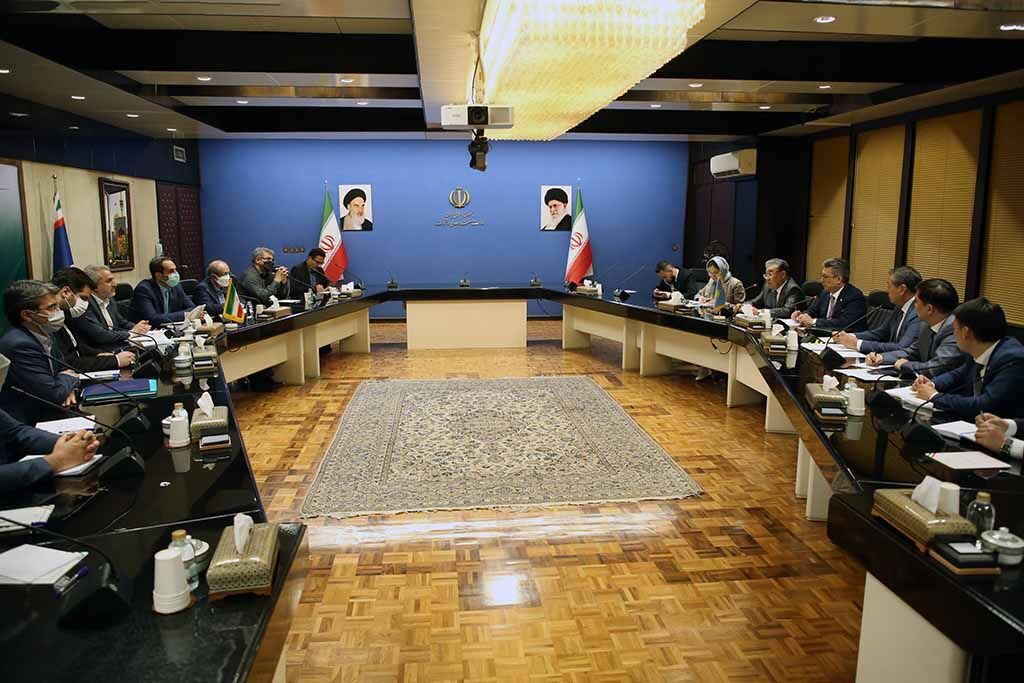 Iran’s Minister of Industry, Mine and Trade Seyed Reza Fatemi-Amin, in a meeting with Deputy Prime Minister and Minister of Trade and Integration of Kazakhstan, Bakhyt Sultanov, described joint ventures as a strategic way to deepen economic relations between the two countries.

Iran and Kazakhstan are set to strengthen trade ties as Tehran is moves closer to join the Eurasian Economic Union.

“The most important issue that exists and needs to be resolved is the issue of financial transfer… There are several mechanisms for financial transfer that we are examining, and if this issue is resolved, we will witness a huge leap in the field of bilateral commercial activities,” said the Iranian minister of trade.

“Kazakhstan is very rich in mining and has big mining companies like Iran. We import two million tons of steel sheets annually, part of which can be imported from Kazakhstan,” Fatemi-Amin added.

Heading a delegation, Deputy Prime Minister and Minister of Trade and Integration of Kazakhstan, Sultanov is in Iran on an official visit to discuss expansion of bilateral trade with high-ranking Iranian officials.

“Iran has good products in various fields including agricultural machinery, chemical fertilizers and other industrial products. Iran has 120 years of experience in oil extraction and also enjoys good knowhow in various fields of technology. We want to exchange experience with Iran not only in oil and gas sector, but also in the field of industry and mining…” added the Kazakh deputy prime minister.

He also referred to Iran’s “high capacity of logistic transit” that can facilitate the implementation of joint projects aimed at deepening bilateral trade ties.

“A key issue for the development of trade relations is that we must provide the best possible conditions for trade companies so that they can conduct their own business directly,” noted the Minister of Trade and Integration of Kazakhstan.

“A number of entrepreneurs and private sector businessmen are with us on this trip. They have already achieved good results in the meetings with their Iranian counterparts. In the first step, they were able to sign a $ 14 million contract. This is not a big amount, but it is effective for expanding cooperation,” the top Kazakh official continued.

Sultanov said Kazakhstan will offer 72-hour visa free stay for Iranian business as the first step to pave the way for bilateral trade extension between Tehran and Astana.

He expressed hope that Iran and Kazakhstan can set up a permanent chamber of commerce to boost bilateral trade.

“We are ready for cooperation on mining, as well as oil, gas and petrochemical industries. We also welcome joint work with Iran on various sectors including home appliances, medical equipment and medicine, can prepare the ground for the Iranian companies to operate in our free zones…” he added.

Support for Iran membership in EAEU

Deputy prime minister and minister of trade and integration of Kazakhstan also emphasized that his country supports Iran’s membership in the Eurasian Economic Union (EAEU).

Kazakhstan, along with Armenia, Belarus, Kyrgyzstan, and Russia is one of the member states of the EAEU. Iran and the Eurasian Economic Union seek to finalize a free trade agreement by the end of 2022.

Under the three-year preferential trade deal, the EAEU and Tehran obliged to accept the conditions for achieving a full free trade plan for tariff-free essential commodities.

The economic bloc is estimated to offer an integrated market of 184 million people and a gross domestic product of over $5 trillion.

The deal has already increased the trade volume between Iran and the member countries of the economic bloc.

The trade volume between Iran and the EAEU member states skyrocketed by over 84% in the period between October 2019 and October 2020, before the outbreak of the Covid-19 pandemic.

Meanwhile, Iran’s Customs Administration announced that the value of the annual trade between Iran and the EAEU member states witnessed a 66% year on year increase, soaring to $5.643 billion over the past Iranian calendar year (ended on March 20, 2022).

Iran exported 2.77 million tons of commodities worth over $1.170 billion to EAEU member states over the same period.