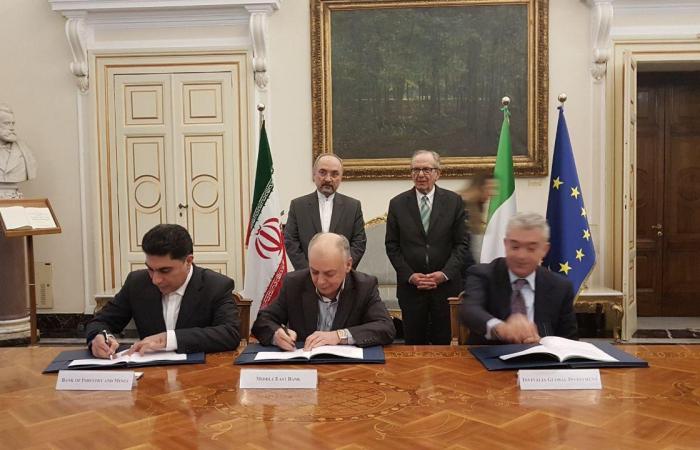 Tehran and Rome on Thursday signed a framework credit agreement worth five billion euros whereby Italy will help its companies invest in Iran.

The accord will open lines of credit to two Iranian banks namely Khavar Mianeh (Middle East) Bank and Sanat va Madan Bank (Bank of Industry and Mine) by Invitalia Global Investment, an Italian state-owned holding, in order to finance investment projects by Italian companies.

According to a Farsi report by IRNA, it is also possible that other Iranian banks would join the agreement.

The construction and production projects of the country, which are run using technology, machinery or engineering services of Italy, can use this finance investment.

Also, all of the public and non-governmental sector projects that have been approved by the relevant organizations and have obtained relevant licenses can take advantage of this facility.

Following the signing of agreements with India, China, South Korea, Denmark, Austria and Russia in recent months, Italy is the seventh country with which a finance agreement is sealed.

Italy is Iran’s major trade partner in the European Union. Latest Eurostat data show that with more than €2.58 billion worth of purchases, Italy was the main export destination for Iranian products during the 10 months to Oct. 31, 2017.

The figure shows a 315% hike compared with the corresponding period of 2016.

The European country was also the second biggest exporter to Iran among other EU member states during the period after Germany, as it shipped €1.38 billion worth of commodities to Iran, up 14.5% year-on-year.