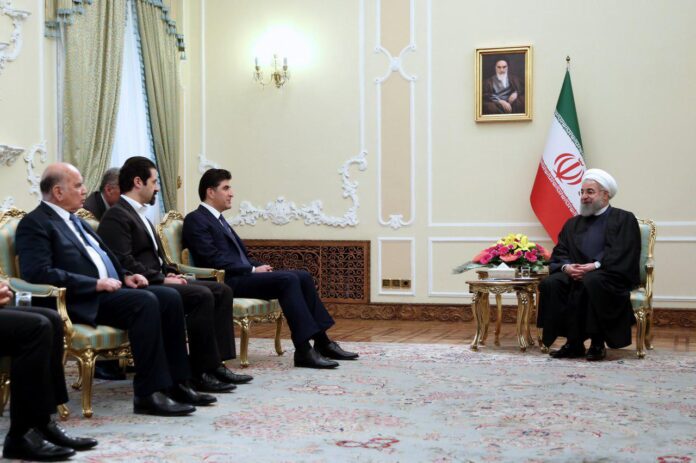 In a Sunday meeting in Tehran, President Rouhani touched upon the historical and deep-rooted relations between Iran and the Iraqi Kurds, and said, “Every effort should be made to further boost cordial ties between the Iranian and Iraqi nations.”

According to a report by the president’s official website, he underlined that the Iraqi Kurdistan region is an important part of that country, adding it plays a key role in reinforcing stability and security in Iraq.

He said some countries seek to disrupt regional security and stability, calling for closer cooperation among regional countries.

“Indubitably, powers and forces beyond the region do not care about the good of the people in the region, and they only think about securing their long-term interests,” he noted.

He stressed that all ethnic groups in the region, including Iraqi Kurds, should practice their legitimate and legal rights within the framework of the Constitution and based on the principle of territorial integrity.

The president further said Iranian investors are ready to take part in development projects in the Iraqi Kurdistan region. He also welcomed Iraqi businessmen’s stronger presence in the Iranian market.

“We favour a more prosperous and more developed Iraq, and this is in the interest of all regional nations,” President Rouhani said.

Barzani, in turn, underlined the importance of having a united and integrated Iraq, and said all sides should abide by the Iraqi Constitution and seek to iron out problems within the framework of the constitution.

He appreciated Tehran’s unflinching support for the Iraqi government and nation, especially the Kurdistan region, against attacks by the ISIS terrorist group, and noted, “We have always been appreciative of the Islamic Republic of Iran’s assistance to Iraq in this fight.”

He invited Iranian investors to take part in development projects in Kurdistan, and called for closer economic cooperation with Iran.

He said Iran-Iraq borders should serve to further promote friendship and development, and reassured the president that the Iraqi Kurdistan region will not allow anybody to used Kurdistan’s territory to make any possible threats against Iran.

“This is one of Erbil’s red lines,” he emphasized.