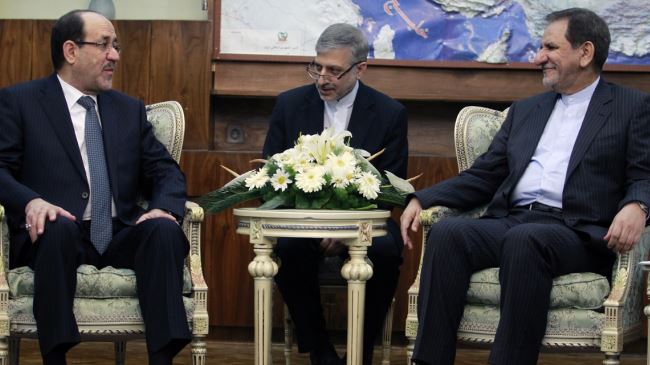 Iraq’s stability and security is closely intertwined with those of Iran, reiterated Eshagh Jahangiri.

“The Islamic Republic of Iran closely monitors issues in Iraq and regards Iraq’s stability and security as its own security and stands by the Iraqi government and nation under the current difficult conditions,” Jahangiri said in a meeting with Iraq’s Vice President Nouri al-Maliki in Tehran on Monday.

“We believe that collective security and stability in the region will be achieved only through joint regional cooperation,” he added.

Jahangiri stressed the importance of safeguarding Iraq’s territorial integrity through unity, expressing hope that the Iraqi officials’ wisdom would lead to the settlement of the country’s problems as soon as possible.

Maliki, for his part, pointed to the existing sensitive situation in the region and called on regional countries to converge in order to counter terrorist groups including the ISIL militants.

He said Tehran and Baghdad have great opportunities to improve economic, political, security, social and cultural relations and noted that the two sides have taken major steps to achieve this goal.

The ISIL terrorists currently control large areas of Iraq. The group sent its militants into Iraq in June, seizing large parts of land straddling the border between Syria and Iraq.

The Iraqi army has managed to make a number of gains in the fight against the ISIL militants in recent weeks.