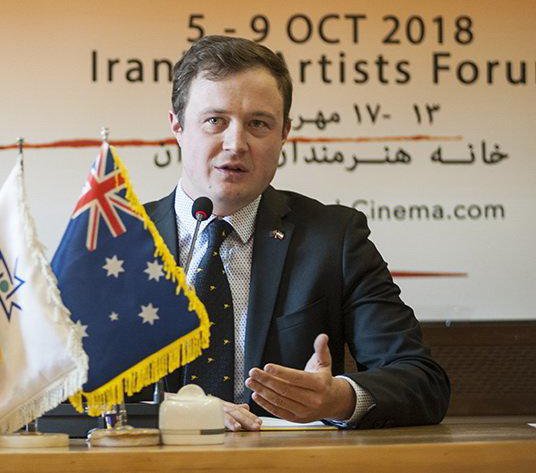 Australia’s cultural attaché says people of his country are much interested in visiting Iran and getting more familiar with the history, culture and civilization of the country.

Hamish Leslie made the remarks on the sidelines of Iran-Australia joint film week, marking the 50th anniversary of the establishment of diplomatic relations between the two countries.

The Australian official told ISNA that his country’s positions on Iran are positive and unchanging.

Leslie added that Australia keeps recommending its citizens and tourists visit Iran, and that Canberra is not going to be strict when it comes to issuing visas to Iranian nationals.

The official had no exact figures on the number of Australians who have travelled to Iran, but said a wave of Australian tourists began visiting Iran following the conclusion of the Iran nuclear deal (known as the Joint Comprehensive Plan of Action, or the JCPOA). He said there were people who always wanted to visit Iran, but did not have enough information. According to the official, many of them visited Iran, and are now making arrangements for their second visit. He also reiterated that Canberra has always supported the Iran nuclear deal.

In her recent speech at the UN, Australian Foreign Minister Marise Payne also said her country believes the JCPOA is one of the best nuclear nonproliferation treaties in the world, expressing hope all countries would back the agreement.

During his two-year mission in Iran, Leslie has visited most parts of the country, including Golestan, Lorestan and Khuzestan provinces. He has also travelled to Khorramabad recently and seen for himself the so-called “mud-rubbing” ritual observed in Muharram. He has also accompanied his in-laws during their trip to the holy city of Mashhad. He says he loves ecotourism and has had good experiences about it while visiting Alamut, Izeh and Mashhad. He loves the traditional Iranian food Mirzaqassemi (the food is made with barbecued aubergines). He also describes as an “extraordinary experience” eating mushroom kebab in Lorestan, and says travelling by train to Andimeshk was fabulous. He says the Australians who have travelled to Iran are pleased as they say Iran was more exciting than what they thought.

He said films are the most important and effective tool whereby nations can get to know one another.

He also touched upon the Australian film and culture week held recently in Tehran.

The official says Australian people are being influenced by international media and have, in their minds, portrayed a picture of Iran based on the reports of the same very media. So, he says, whatever positive news, especially about mutual cultural relations, is spread will definitely help more and more people get a better understanding of Iran and be encouraged to visit the country.

According to the official, Iranian historical films can be attractive to Australians because it would be interesting for the people of a young country such as Australia to get to know a country which used to be ruled under an empire thousands of years ago, has had civilization, and has taken shape during different historical eras. Leslie says the Australians who have travelled to Iran are keen to visit historical cities such as Isfahan as well as ancient monuments like Persepolis. Therefore, he says, history and movies can help Australian people get a better understanding of Iran.

The Australia-Tehran Film Week was kicked off on October 6 and will be open to visitors until October 9 at the Iranian House of Artists. Six films will be screened at the event.