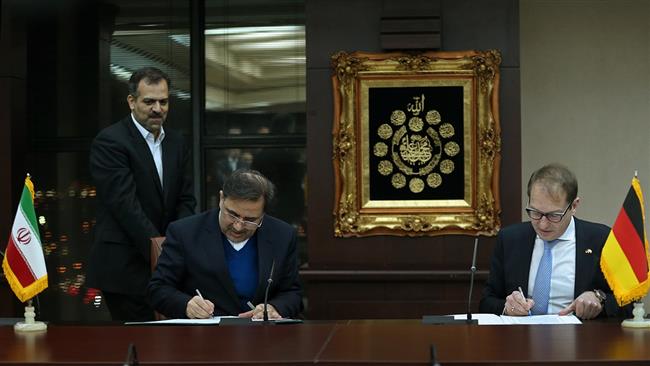 Iran says it has signed a deal with Germany to cooperate over production of 50 diesel locomotives which will be used in the Iranian rail network.

Iran’s Minister of Roads and Urban Development Abbas Akhoundi said the deal was signed during a visit to Tehran by Germany’s Minister of Transport and Digital Infrastructure, Alexander Dobrindt.

Akhoundi was quoted as saying by IRNA news agency that the locomotives will be jointly produced by Germany’s engineering giant Siemens and Iran Power Projects Management Company (MAPNA).

He added that Iran currently has 165 diesel locomotives, adding that the country’s railway system needs an extra 150 locomotives.

Elsewhere in his remarks, Akhoundi said that Iran was negotiating with Germany over investing in Tabriz, Ahvaz and Chabahar airports.

He added that the two countries would soon set up working groups to purse this.

The Iranian minister further emphasized that Iran welcomed the participation of German companies in a key project to construct Iranshahr Terminal in Imam Khomeini International Airport with a passenger capacity of 25 million per year.

IRNA also quoted Dobrindt as saying that Berlin was interested in the expansion of its cooperation with Iran in the areas of transportation.

He added that several German airports including Munich and Frankfurt were particularly interested in projects to develop airports in Iran.

The remarks by Akhoundi and Dobrindt followed the signing of a memorandum of understanding between Iran and Germany to promote cooperation in various areas of the transportation industry.

Dobrindt had paid a visit to Iran in October during which he signed six basic agreements with Akhoundi in the area of transportation.