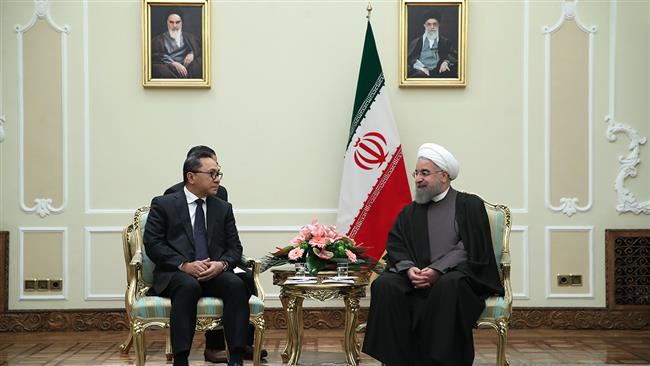 Iranian President Hassan Rouhani says Iran and Indonesia must boost their consultations and cooperation to combat terrorism and settle current issues in the Muslim world.

“Terrorism is a major predicament in the region, East Asia and other parts of the world,” Rouhani said in a meeting with the chairman of the Indonesian People’s Consultative Assembly (MPR), Zulkifli Hasan, in Tehran on Tuesday.

Noting that some terrorist groups falsely attach themselves to Islam, Rouhani urged Muslim scholars to illustrate this fact to the world, adding that the real Islam is a religion of mercy and moderation and this true face of Islam must be presented to the world public.

He emphasized that terrorism must be driven out from Islamic lands.

The Iranian president stressed the importance of reinforcing unity among Muslims across the world, saying, “We can safeguard the Islamic culture and promote the power of the Muslim world through unity.”

He also said Iran and Indonesia enjoy good capacities to boost their economic cooperation and expressed hope that the volume of trade between the two countries would reach two billion dollars in the near future.

“The two countries’ cooperation is very important in solving the problems of the Muslim world,” Rouhani added, expressing regret that Muslim countries, including Yemen, Syria and Iraq, are plagued with instability and numerous problems and calling for collective efforts to restore security to these countries.

Hasan, for his part, said Iran and Indonesia, as two important Muslim countries, can use their capacities to expand cooperation in different sectors, particularly in trade and economy.

He called on Muslim countries to settle their differences and reinforce their commonalities and said Tehran and Jakarta are capable of taking effective steps to help this process.

The Indonesian MPR chairman arrived in Tehran on Sunday on an official four-day visit at the invitation of the Iranian Parliament Speaker Ali Larijani.