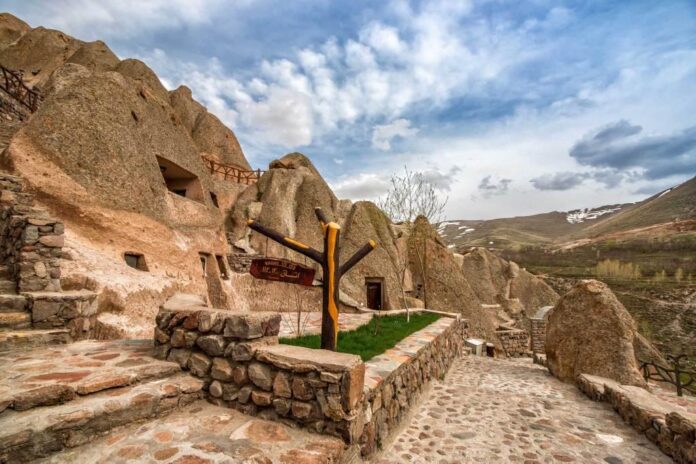 Iran is home to a number of attractive accommodation facilities which tempt every tourist to stay there. See some of the most strange hotels in Iran!

Many tourists who travel to different cities and countries like to have different accommodation experiences. Staying in places that are different from a few star hotel will be exciting for many. The more diverse the centres are, the more attractive they will be. That said, there are many attractive, strange hotels in Iran.

In foreign countries, well-off investors have used any idea to cover the tastes of tourists in order to attract them. In Iran, this issue has been dealt with, but since a while ago some investors have come up with the idea that they build some accommodation centres a little different from those of other countries.

Kandovan Village in East Azarbaijan province is known for its rocky houses, which are similar to ice-cream cones. These houses have been built in the rocks, both inside and outside of which are attractive. Anyone can stay in them because these houses are now occupied by the local people of Kandovan and they will live next to you. Next to these houses, there is a rocky hotel that can provide a more beautiful and private space for any tourist.

In Semnan province, one of the mine-owners in the city of Aradan near Garmsar has run a residence underground. He has created something like an underground city where a tourist could stay in the rooms and whenever s/he likes, s/he would come up on the ground from the basement to do some recreational activities in the desert.

Lord of the Rings Habitat!

One of the tourism activists in Ardabil province has built homes in the form of those seen in The Lord of the Rings feature. This is an experience of another style of accommodation in the intact nature of Ardabil.

There is a rocky village in the central part of Shahr-e Babak which dates back to 8,000 to 12,000 ago. There are several houses in the area that are equipped for accommodation and have hosted domestic and foreign guests since 15 years ago.

The attractiveness of these lodging resorts is that their old structure is preserved and you feel that you’ve spent thousands of years at the heart of history.

These homes are registered on the UNESCO World Heritage List to remain for all the people of the world forever.

Local houses can now be found in all provinces, but you can also spend the night at a hut. People in the desert areas of Sistan and Baluchestan and Kerman build these huts to protect them against heat and cold. Now these huts have been built in the form of a five-star hotel in Kerman province.

Hotels at Tree House or Inside Tubes

In Bushehr province and the port city of Shirinoo in Asaluyeh, you can find some hotels that are built inside tubes on the beach.

Each family can stay in these industrial tubes that have been converted for this purpose. You can even spend the night on a floating tube, or lodge on a tree house.

Jabalieh Dome; An Ancient Stone Building Made with Camel Milk