Iran Has 25-Year Plan for Ties with China: Larijani 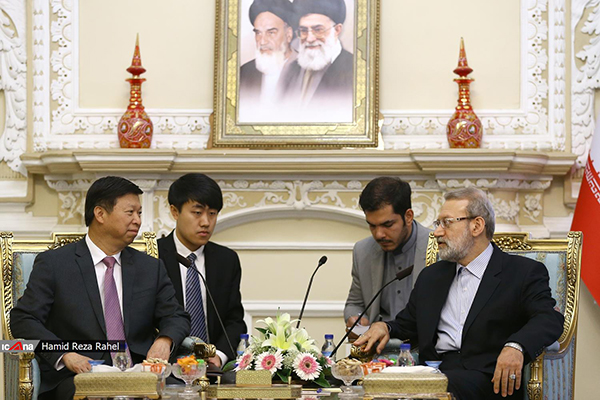 Iran’s Parliament Speaker’s Ali Larijani says the country has developed a 25-year plan to expand its mutual ties with China amid the US pressures on both countries.

He made the remarks on Tuesday in a meeting with the head of the International Liaison Department of the Communist Party of China, Song Tao, in Tehran.

“To turn the plan into a joint strategic document, we need to hold negotiations with the Chinese side,” Larijani said.

According to Larijani, the idea to develop a plan to expand mutual ties between Iran and China was underlined by Chinese President Xi Jinping just recently. “Now we have developed the plan and to make it a joint strategy, we need to sit for talks with the Chinese side.”

Larijani also touched on the historical civilizations of Iran and China and said during his latest visit to China, he held talks with the Chinese officials and the two sides opened a new chapter in their relations.

He then referred to the latest remarks by Tao on the US pressure on Iran and China and said the US enmity is not tactical but strategic. “So, we need to develop a strategic plan to cope with the US pressure.”

The Iranian top lawmaker then underlined that negotiations between Iran and China can thwart the US plots but to develop successful plans, the two sides need to take some practical steps.

For his part, the Chinese politician said today the region is facing a complicated situation and Iran and China should remain in close contacts to cope with the current crises.

Tao went on to say that China’s will to develop further relations with Iran has not changed. “Iran and China as two historical civilizations in the world have already played their key role in the development of the Asian continent.”

“Tehran and Beijing have made huge progresses and the two sides’ experiences reveal that developing countries don’t necessarily need western prescriptions to make achievements in various areas,” he said.

He then referred to the fate of the Iran nuclear deal following the US withdrawal from the nuclear accord and said China supports Iran’s efforts to preserve the JCPOA.

Tao also referred to the US pressure on Iran and China and said the two countries have already stood against the pressure. “One of my main goal during this visit is to discuss a set of coordinated measures to stand against the US hegemony.”