Iran Front Page
Home Politics Foreign Policy Iran FM: Tehran not to Give in to US Pressures 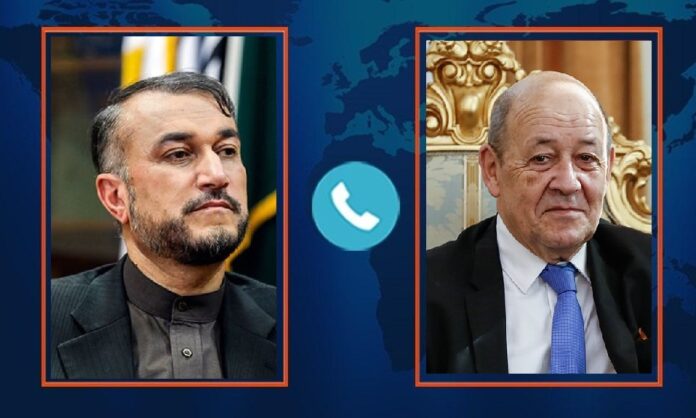 Iran’s Foreign Minister Hossein Amir Abdollahian tells his French counterpart Jean-Yves Le Drian that the Islamic Republic will not give in to US pressures over its nuclear program.

Amir Abdollahian the US is responsible for the current situation regarding the matter because it illegally withdrew from the nuclear deal and reinstated oppressive sanctions on Iran.

He also urged Europe to play a constructive role and adopt a calculated stance tin this regard.

Amir Abdollahian added European governments are also partly to blame because they failed to redress the US measure, saying the US and the European signatories to the nuclear deal must return to full compliance with the 2015 agreement otherwise known as the JCPOA.

Referring to the recent Vienna talks over Iran’s nuclear program, he said Iran will participate in talks that will produce tangible results and fulfill the rights and interests of the Iranian people.

He also noted that US President Joe Biden has done nothing to make up for his predecessor’s illegal moves and he’s going down the same path, using sanctions as a tool to pressure Iran.

Former US president Donald Trump withdrew Washington from the JCPOA in 2018 and reinstated sanctions after sanctions on Iran.

The European parties to the nuclear deal did not take any tangible measures to reverse that except for crafting a mechanism known as INSTEX that they said would, as an alternative to Swift, enable Iran do international transactions. Iran has repeatedly said INSTEX was not meaningfully helpful. The mechanism was in fact meant to only facilitate medicine imports into Iran.

Later, Tehran began to scale down its commitments under the JCPOA to force the other sides to follow through their obligations. It now says it will return to full compliance only after the US removes all the sanctions in one go and return to the JCPOA.