Iran-France ties must make up for sanction-related losses: Rouhani 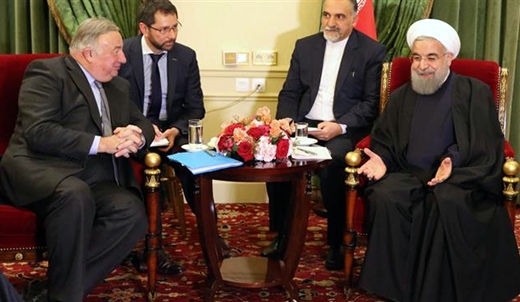 Iranian President Hassan Rouhani says Tehran and Paris must initiate close and widespread ties to make up for the losses caused by the recently removed “cruel and unjust” sanctions which were imposed on Iran.

During a meeting with French Senate President Gerard Larcher in Paris on Wednesday, Rouhani noted that Tehran and Paris can cooperate to help solve regional and international problems and take effective measures to promote peace and stability throughout the world.

President Rouhani highlighted that the threat of dangerous terrorist groups who are wreaking havoc across the globe can only be neutralized through closer international and multilateral ties.

The visiting president also offered condolences over the Paris attacks which claimed the lives of 130 people in November, saying, “These terrorist actions show that terrorism is a dangerous pandemic that threatens the whole world, including European cities.”

In his turn, Larcher said that the removal of sanctions is a suitable opportunity for the swift improvement of relations between the two countries, and that France is optimistic about the outcome of the historic visit by the Iranian president.

Sanctions imposed on Iran over its peaceful nuclear activities were recently lifted following the implementation of a historic nuclear agreement between Iran and the P5+1 group of countries, dubbed the Joint Comprehensive Plan of Action.

Also on Wednesday, Rouhani (seen below) met with a group of directors from important French companies with French Foreign Minister Laurent Fabius and French Economy Minister Emmanuel Macron in attendance.

“I am sure that your presence in this meeting shows your preparedness for cooperation in Iran’s economy, which is replete with potentials and opportunities… ” he said.

He added that making banking and insurance preparations are the best steps towards restarting economical ties between the two countries.

Rouhani is in France upon an official invitation by President Francois Hollande. The trip is the second and last leg of the president’s four-day tour of Europe, which began on January 25 in Rome, Italy.