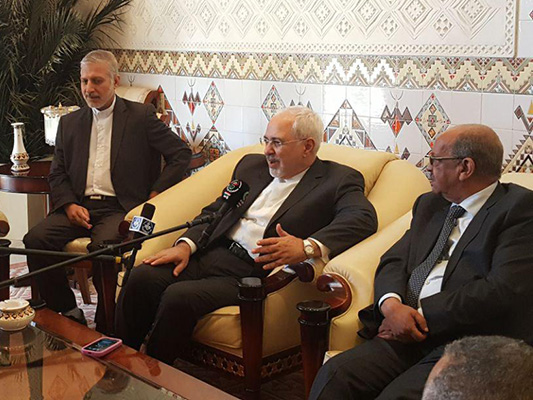 Iranian Foreign Minister Mohammad Javad Zarif has just arrived in the Algerian capital on the first leg of his two-day visit to three North African countries.

Zarif, who left Tehran earlier on Sunday, arrived in Algiers and was welcomed by his counterpart Abdelkader Messahel.

The two sides immediately started their talks on bilateral issues and latest regional developments at the Algerian Foreign Ministry.

Zarif’s tour of North African states will later take him to Mauritania and Tunisia as well.

Foreign Ministry Spokesman Bahram Qassemi earlier declared that the visits are made at the official invitation of the three African states.

During the visits, which are aimed at deepening bilateral relations between Iran and the North African countries, Zarif is planned to meet his counterparts and the heads of these states.