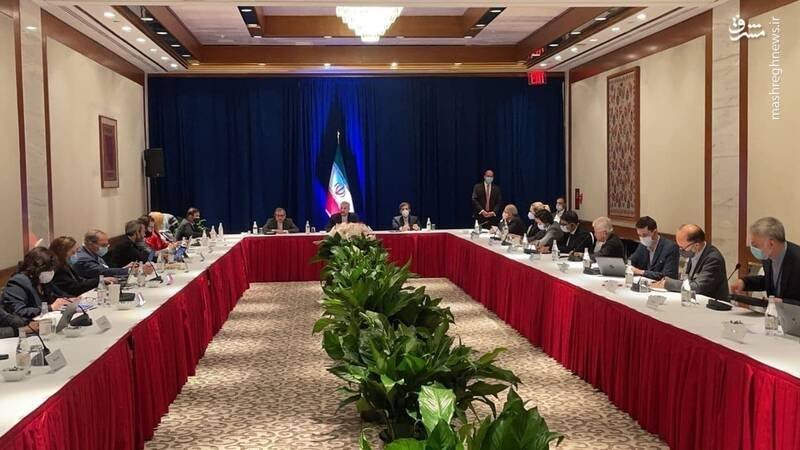 Iran's Foreign Minister Hossein Amirabdollahian, in a meeting with senior journalists and reporters from American and United Nations media on Friday, explained the policies of Iran's new administration with a focus on its foreign policy.

He said in his opening speech that: The main priority of the new administration is to pursue a balanced foreign policy. We have a plan to have ties with all the countries in the world, and the only country that we believe has no legitimacy, and no connection will be established between us and that country is the fake regime of Israel, which we do not recognize, and we have clear and precise positions on its unconstructive policies and destructive actions in the region.

Regarding the Joint Comprehensive Plan of Action, Amirabdollahian said the Americans, on the one hand, insist on returning to the nuclear deal and ask Iran to return to the negotiating table in Vienna, but simultaneously impose new sanctions on Iran. He said this is a paradoxical behavior which is not conveying a constructive message.

The foreign minister said since its inauguration, the new Iranian administration has declared its clear and unequivocal policy towards the JCPOA which is recognizing the resumption of negotiations, not distancing itself from the JCPOA, and pursuing full return of all parties to the JCPOA. He stressed that this window of opportunity will not remain open forever.

He described Mr. Grossi’s trip to Tehran and his meeting with the new head of the Atomic Energy Organization and their constructive agreement as another positive sign and action by Iran.

In another part of his speech, Amirabdollahian mentioned receiving conflicting media and diplomatic messages from the White House, and told reporters and journalists in New York: The new Iranian administration is a pragmatic one.The extent to which American statesmen live up their commitments matters more than words to us. It is unacceptable for Biden to talk about negotiations, agreements and even request bilateral talks with Iran, but continue the wrong policies of previous U.S. president Trump.What determines the outcome of the negotiations on the JCPOA is the behavior of the United States. Since Mr. Biden took office, he has taken no constructive practical step, other than making contradictory comments.

Later in the meeting, the foreign minister referred to Iran’s lack of access to its money and assets in banks in Japan, South Korea and some other countries to purchase needed medicine and vaccines, and called U.S. sanctions a crime and terrorism.

The top Iranian diplomat stated: We are reviewing the Vienna talks file and the Vienna negotiations will resume soon. At the same time, he stressed that Iran only deems a negotiation with tangible and practical results as constructive.

Regarding regional issues, Amirabdollahian noted that the foreign policy of the new Iranian administration is being designed for the best relations with neighboring countries and the region. He said the ongoing talks in the Persian Gulf, constructive initiatives to restore peace to Yemen and Syria, the formation of an inclusive government in Afghanistan and progress and development in Iraq are top priorities of Iran’s regional policies.

He said: Prioritizing our neighbors and the Asian continent does not mean ignoring other priorities; rather the principles of the new administration’s foreign policy are pursuing a balanced foreign policy and active foreign relations with all countries, based on mutual respect and interests.

At the end of his speech, Amirabdollahian said in reference to U.S. statesmen that: The United States can also take this opportunity by reconsidering its wrong and unconstructive policies toward the Islamic Republic of Iran. The Iranian nation has a great history and civilization, and the American statesmen should know that the language of sanctions and threats will not work, as it has been proven to them over the past 40 years.

We expect the U.S. statesmen to come to Vienna realistically and take practical, positive, constructive and measurable steps instead of saying beautiful words, and they should be in no doubt that if they want to speak with their past choice of words and unconstructive behavior, the Islamic Republic of Iran will not be without options.

It should be noted that in this meeting, the foreign minister answered the questions of the reporters.