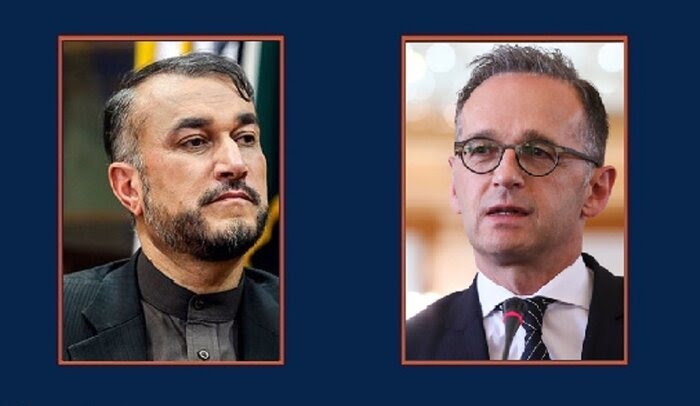 The Iranian foreign minister says Tehran will not give in to unfounded propaganda regarding the talks over the Iran nuclear agreement.

Iranian Foreign Minister Hossein Amir Abdollahian and his German counterpart Heiko Maas, in a phone conversation, have discussed the latest status of bilateral ties, the Vienna talks and the regional developments.

During their talks held on Monday night, Heiko Maas asked about the health situation of Amir Abdollahian and wished him full recovery.

The Iranian foreign minister, in turn, touched on the good record of cooperation between Iran and Germany in different fields and underlined the significance of their expansion.

Maas, for his part, said German companies are interested in cooperation with Iran and expressed hope that such cooperation are strengthened after removal of existing problems.

The two sides also reviewed cooperation in the areas of industry, renewable energies, power plants, agriculture, medicine, science and technology as well as environment and under the significance of relevant joint work.

The Iranian foreign minister also referred to the upcoming talks in Vienna. He said the US is to blame for the current situation.

“The US withdrawal [from the nuclear deal] and the failure of the three European countries to fulfill their obligations have increasingly deepened mistrust. Therefore, full removal of sanctions is a necessity,” he said.

Amir Abdollahian also reiterated the need for the European sides to avoid issuance of statements and comments, which fuel tensions.

“On the path to the talks and in media terms, using a language of force and threats is not helpful and the Islamic Republic of Iran will not give in to unfounded propaganda. Any inaccurate comment, which does not comply with the facts, can jeopardize ongoing efforts,” he said.

The German foreign minister also said his country understands Iran’s lack of trust. He noted that his country will put efforts into returning the US to the nuclear deal, and also to help talks bear results.

During the conversation, which was held in a friendly atmosphere, regional issues were also reviewed.

On the current situation in Iraq, the Iranian foreign minister once more reiterated Iran’s condemnation of the attack on the residence of the Iraqi prime minister.

The German foreign minister, in turn, touched on the joint stance of Germany and Iran to condemn the attack and underlined the necessity of continued support for peace and stability of Iraq.

Meanwhile, Amir Abdollahian talked about the situation and developments in Afghanistan, and stressed the need for sending more aid to the country. He also said the campaign to vaccinate some four million Afghan nationals in Iran is almost complete, noting that Tehran is ready to dispatch Germany’s aid to Afghanistan through Iran borders.

The Iranian foreign minister also called for an end to the humanitarian blockade on Yemen, which was welcomed by his German counterpart.

The developments in Lebanon and support for the country’s legitimate government were among other topics highlighted during the phone call.