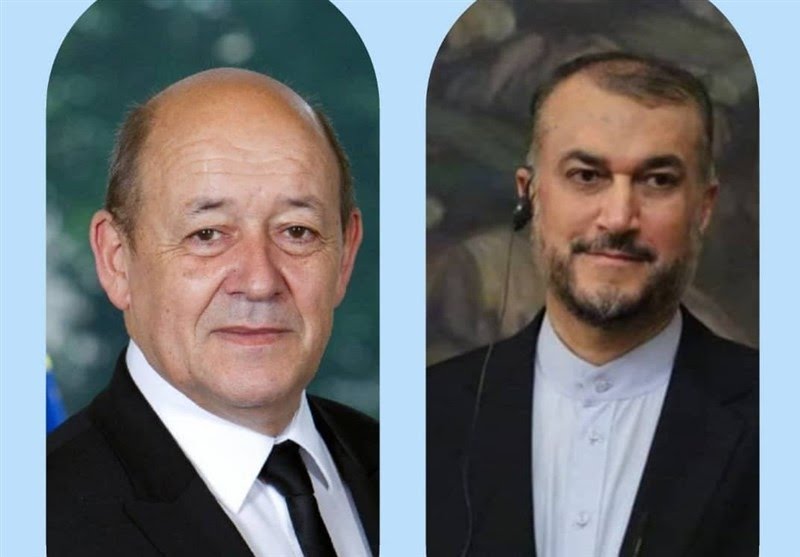 The Iranian foreign minister has told his French counterpart that Iran will press ahead with beefing up its deterrence forcefully without paying attention to the US.

He said Iran wants a good deal but it has requirements including the lifting of all anti-Tehran sanctions.

Iranian Foreign Minister Hossein Amir Abdollahian and his French counterpart Jean-Yves Le Drian have exchanged views on a whole range of topics in a phone conversation.

Among the issues discussed were bilateral relations and the upcoming talks in Vienna.
During the conversation, the top French diplomat asked about the health and physical condition of his Iranian counterpart and wished him a rapid recovery.

Amir Abdollahian, for his part, thanked the French foreign minister for asking about his physical health.

He said the two sides can forge closer cooperation on different fronts.

The two sides touched upon previous contacts between the presidents of both countries as well as talks between Amir Abdollahian and French President Emmanuel Macron on the margins of the Baghdad meeting along with the recent in-person meeting between the foreign ministers of the two countries, and traded views on reciprocal ties together with opportunities for cooperation.

The Iranian foreign minister also recalled the United States’ responsibility for the current situation of the JCPOA as well as the role that the three European countries’ silence has played in Washington’s excessive demands.

“Iran wants a good agreement, but it has requirements, including the other sides fully complying with their commitments and the effective lifting of sanctions,” said the top Iranian diplomat.

He referred to the United States’ recent sanctions against Iran, saying the move is yet another reason why Iran keeps distrusting the US.

He stressed the need for US guarantees and effective verification.

The foreign minister said Iran, like any other country, is entitled to have a defense program as a sovereign right, and added Tehran will move full steam ahead to increase its defense power without paying attention to the United States’ unconstructive sanctions policy.

He said Iran is serious in the nuclear talks and is ready to reach a good deal immediately.

He urged the International Atomic Energy Agency (IAEA) to avoid adopting politically-motivated approaches, and said Iran will continue its technical cooperation with the agency.

The French foreign minister, for his part, said Paris supports the return of all sides to the JCPOA, adding he will try his utmost in that regard.

He expressed hope that rapid headway will be made with the forthcoming negotiations in Vienna.

In the phone conversation, Macron’s greetings were conveyed to the Iranian president, and the mutual response was given by the Iranian side accordingly.

The deputy foreign ministers of the two countries will hold talks over bilateral, regional and international issues today in Paris.