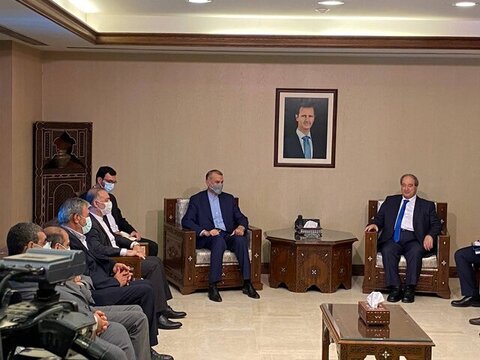 Iran’s Foreign Minister Hossein Amir Abdollahian has described talks with his Syrian counterpart Feysal Meqdad on expanding ties between Tehran and Damascus as ”very useful”. He was speaking at a press briefing with Meqdad on Sunday in Damascus.

He added that the two countries are drawing up a plan for active development of economic and trade cooperation to counter the oppressive sanctions of the enemies.

Amir Abdollahian continued, “We discussed the latest developments in the region. We believe that any political and security arrangements in the region will be achieved with the presence and participation of all regional countries, including the Syrian Arab Republic, and in this direction, we consider as important, the role of Iraq and Syria to help create new regional arrangements in the political, security and economic spheres.”

The Foreign Minister also said that the presence of foreign forces in the region will not contribute to security and lasting stability.

Amir Abdullahian also said, “Zionists are an important factor in regional insecurity. The Zionists have taken Muslims, Christians and even Jews captive in the historic land of Palestine. Undoubtedly, consultations and cooperation between the Muslim countries of the region play an important role in creating lasting security.”

Iran’s Foreign Minister noted that Iranian and Syrian officials took into consideration serious cooperation between the private sector and businessmen of the two countries during his visit to Damascus.