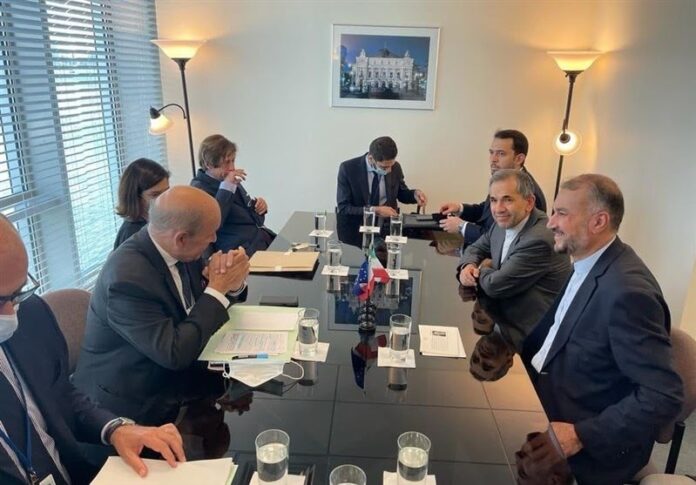 Iran’s Foreign Minister Hossein Amirabdollahian and his French counterpart Jean-Yves Le Drian met on Friday in New York to discuss bilateral issues, the nuclear agreement and the situation in Afghanistan. The meeting happened on the sidelines of the UN General Assembly. Le Drian said, “France is concerned about the delay in the resumption of nuclear talks and is interested in resuming the negotiations as soon as possible”.

He added that France also wants full co-operation between Iran and the International Atomic Energy Agency.

During the meeting, Amirabdollahian described the talks in Baghdad as “good” and said he thinks France is interested in expanding relations with Iran. They believe in bilateral relations.

He also thanked the French foreign minister for inviting him to Paris and extended an invitation to Le Drian to visit Tehran. He said the new government of the Islamic Republic of Iran is interested in expanding bilateral and regional cooperation.

Amirabdollahian noted that the current government is pragmatic and accepts negotiations as an important tool of diplomacy.

He added that Iran is ready to return to the Vienna talks and is rapidly reviewing the previous negotiations. At the same time, the Iranian foreign minister regretted the lack of serious and practical action by the United States and the three European countries in fulfilling their obligations. He said practical and tangible results are extremely important for the Iranian people when they consider returning to the negotiating table. He also reiterated that the current US administration has not taken any serious and practical steps to return to its obligations and, to the contrary, has imposed new sanctions on Iran. Amirabdollahian said Iran doubts the seriousness of the Biden administration in returning to the Iran nuclear deal, known as the JCPOA. Amirabdollahian and Le Drian also spoke over the situation in Afghanistan.

Amirabdollahian said the Islamic Republic of Iran is in contact with all parties in Afghanistan and is trying to encourage them to form an inclusive government. He however noted that important challenges remain in this regard. The Iranian foreign minister also referred to the growing number of Afghan refugees in Iran and the Islamic Republic’s history of hosting Afghan nationals, calling for international support, including from France, for vaccination of Afghan asylum seekers.

In return, the French foreign minister agreed with Iran’s position on the need to form an inclusive government and prevent the spread of terrorist acts in Afghanistan. Le Drian stated that it is necessary to help refugees in Afghanistan’s neighboring countries as well as internally displaced Afghans. He said France is considering implementing joint projects for this purpose.