Iran FM says battle against violence must be within international law 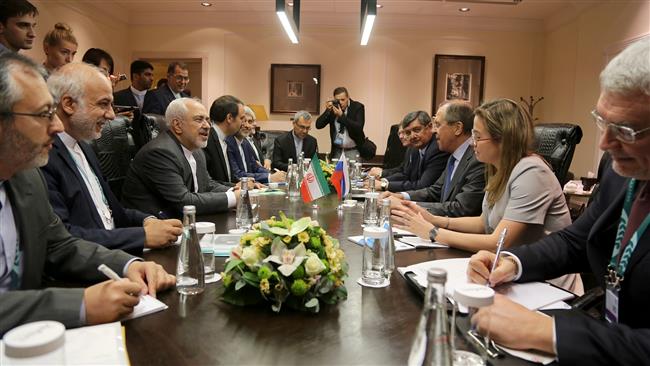 Zarif lashed out at countries which employ double standards with regard to violence, including the crises in Syria and Yemen.

Iran’s Foreign Minister Mohammad Javad Zarif says the battle against violence in the region must be within the framework of international law.

Zarif, who attended a meeting with Russian Foreign Minister Sergei Lavrov in Moscow on Thursday, lashed out at countries which employ double standards with regard to violence, including the crises in Syria and Yemen.

“In the fight against violence, the focus must be put on international law. We are witness to efforts by regional and outside actors who disregard or selectively use international law. Horrifying examples can be seen in Syria and Yemen,” the Iranian foreign minister stated.

The meeting was held on the sidelines of the Shanghai Cooperation Organization (SCO) Council of Ministers of Foreign Affairs and the High-level “Security and Stability in the SCO Region” Conference in the Russian capital.

Zarif also urged the SCO member states “to create a strong legal framework to disarm and defeat those who glorify violence.”

The Russian foreign minister, for his part, touched upon the issue of recruitment by Takfiri terrorist groups, calling for the SCO countries to take a more active role in containing the threat of extremist groups.

“Within the fight against international terrorist organizations, much attention is required on the question of neutralizing the attempts of our citizens to get involved in radical movements, potential terrorists that have gone through special training, and fighters coming back to the territory of SCO countries after participating in armed conflict on the side of extremist groups,” Lavrov said.

The Iranian foreign minister also attended a trilateral meeting with Lavrov and Chinese Foreign Minister Wang Yi to discuss a number of regional and international issues, including the ongoing negotiations over Tehran’s nuclear program and the deadly conflicts in Iraq, Syria and Yemen.

The SCO is a Eurasian political, economic and military organization founded in 2001. It is comprised of China, Kazakhstan, Kyrgyzstan, Russia, Tajikistan and Uzbekistan as its full members.