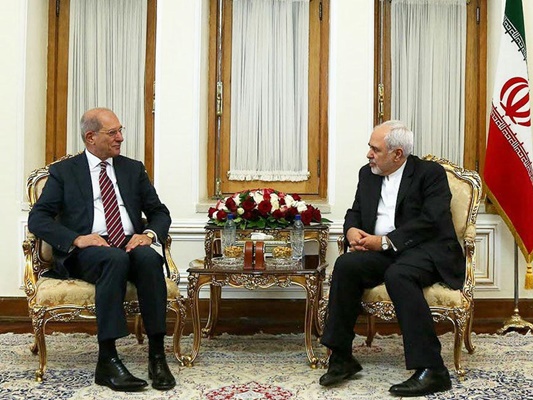 Iranian Foreign Minister Mohammad Javad Zarif has held talks with the Director-General of the Organisation for the Prohibition of Chemical Weapons (OPCW) in Tehran.

During the meeting on Sunday, the Iranian top diplomat said Iran was a victim of chemical weapons used by the former Iraqi dictator Saddam Hossein during the eight-year Sacred Defence in the 1980s.

“Therefore, based on our main principles, we always reiterate our opposition to any use of chemical weapons and dismiss such a use as unacceptable,” he noted.

He went on saying that the Islamic Republic of Iran has always stressed that no side is allowed to use chemical weapons in any armed conflict across the world.

“It is regrettable that the terrorist group of ISIS has used chemical weapons in its war against the Syrian government,” he added.

Iranian Foreign Minister also expressed the Islamic Republic’s readiness to cooperate with the OPCW in Syria.

For his part, OPCW Director-General Ahmet Üzümcü praised the Islamic Republic for its long-time cooperation with his organization.

He also referred to the fact that his visit to Iran has coincided with the 30th anniversary of Saddam regime’s chemical attack on the Iranian northwestern city of Sardasht and added as the head of the OPCW, he has annually issued a statement on the incident.

Üzümcü expressed his thanks to Iran for its readiness to offer cooperation with his organization in a probe into the alleged chemical attack in Syria and said the OPCW is now conducting investigations on the use of Sarin nerve gas in the April attack.

The attack on Khan Shaykhun in Syria’s Idlib province left more than 90 people dead, including women and children.

The Syrian government has strongly denied having any role in the alleged gas attack which sparked outrage around the world as photos and video of the aftermath, including quivering children dying on camera, were widely broadcast.

The US used the attack as a pretext to fire 59 Tomahawk cruise missiles from the Mediterranean Sea at al-Shayrat airbase in the region on April 7.